Madonna: a blond bombshell in bangles. The five-two Rock City knock-out with a New York swagger in her step. And Veronica: the Catholic school-girl irritated by the drama of dogma...but nonetheless covered in crosses. One moment her champagne ponytail bobs from bitching, and in the next chocolate tresses tickle her face. No matter her hair color, it’s always accompanied with a piercing green-eyed gaze. Even as Esther: the daughter of Israel any king could call a queen. Thus for a time she was Mrs. Ritchie; for eight years there lived this lady of the manor. That is until the castle crumbled, was debated over and divvied up. Ms. Ciccone she returned, with babe in arms and losses covered.

Yes, the Boy Toy is back again and beautiful anew. She’s a drug. M: an alphabetical dosage and dealer of dance floor chemicals. On the verge of releasing her latest stage show in high-definition, the urge to reflect upon her brilliance is overwhelming.

This woman of numerous names could well be Shakespeare’s Dark Lady, Desdemona or Juliet. Perhaps she is the face that launched those thousand ships. A Homeric heroine no doubt, and yet she is more than just a metaphorical muse, she is one in fact. This is made evident throughout a series of epochs. Three decades have passed since the first of four began. That self-titled start was a celebration which ended as an expression. On an ambitious world tour the second epoch opened. So did her legs and every eye at Cannes. Some snuck a peak between her steely thighs, but in time they were home to more than hormones, they caressed the luminous skin of a new born soul. Dawn broke on another chiliad and with the aid of old friends and new she danced into the third age. She’s been queen of the dancehall ever since, save for one magical moment: 2003’s American Life.

Love, Sex, Drugs and Money: this millennial hydra was the working title for Guy Ritchie’s interpretation of an Italian classic. Newly-wed to his like-a-virgin bride he not only adorned her with his surname, he offered her the spotlight in the aforementioned film. But the crowds would soon cast a different light upon the pop-star, (ignorance affords an illumination all its own). Meanwhile Madonna was swept away in her work with Guy. That was until her first love (music and the making of it), came calling at her doorstep. Enchanted by her rhythmic Romeo she soon left the set for the studio and embarked upon her longest recording endeavor to date.

Accompanied by Mirwais Ahmadzai, the two waxed poetically about the philosophies of life. Madonna’s warming light battled with Mirwais cold and sparse approach, and together they birthed a conceptual album that would soon rattle the world.

The album experience began like the album itself, with the title single that pulled no shots. Struck by these blows fans and foes alike booed as it played. Out of fear, its music video would inspire worse. Then Madonna did what she’d spent twenty years opposing, she censored her art. A bastardized version was released instead. It dumbed down the lyrical impact by doing the same to the visuals. Some said her words were corrupted in other ways. In particular the way she presented them in her conclusive verse. She had dared to rap. Oh the humanity! How could the aging celeb do such a thing? The question may be answered by another: what is more American than rap? Or possibly via the unedited video which displayed her spoken word as tongue-in-cheek.

Her second single, Hollywood, fared little better. But be that as it may, it built upon the groundwork laid by American Life. Furthermore it followed it on the album, and the two came to an apex on the third track, 'I’m So Stupid.' Stupider than stupid as Madonna admits, for what good is fame and fortune? She posits this plainly, and seeing that she had overwhelming amounts of both, who knew better than her? Americans felt they did. In the wake of two toppling towers they were not ready to give up their dream, having just lived through a nightmare. Fame and fortune had to mean something special, and there were a slew of reality stars put on a soapbox to say so. Yet Madonna and her triune track listing persisted in arguing otherwise. They stripped the American Dream of its costly synthetic suit, whilst the remaining eight songs clothed it in the most natural of fibers, love.

Since 1983 the songstress had sung about love in some way or another, but as with the rest of American Life it was tackled differently this time around. Both the third and fourth singles sent forth from the album’s framework discussed love. Nothing Fails described it as the absence of fear, the true and holy faith. Thereafter, on Love Profusion, she interpreted its prefix as the ultimate mystery, the means by which the emotion elevates the individual to a state of euphoria. Love through these eyes can be seen as a sacred thing. Whether, via the matrimony of marriage, or thanks to the parents she once cleaved to, a life full of love was what she longed for. And at the time she had it, even if it was across the pond. Irregardless of this, she was still a daughter of the stars and stripes, and had played the part with spurs since Music. To express this point further, she literally decorated American Life with Old Glory. Standing before that spangled banner she did so as a revolutionary, even if it was as the Argentinean type. Being a guerilla-slash-politico is the sort of stock America has honored with every dollar since its inception. After all, what was George Washington if not Che Guevara’s predecessor? He too led a rebellion against tyranny. But oh how the U.S. of A raged over blasphemes that were everything but.

All of these misinterpretations and short sighted approaches to American Life, turned it into a relatively poor performer both critically and commercially. Seeing that it was also her final album under the Maverick flagship, it is interesting to note its similarities to the record that started that endeavor. Erotica was also labeled with warnings and equally as experimental. Conceptually it discussed the flesh and its urges, making its title extremely fitting. So too was the Sex book she released alongside it, as well as the videos that coupled its tracks. All of these titillating tidbits were viewed with disgust, but in time people experienced a change of heart. In time Madonna would be seen as daring for that effort. Just as she should now been seen (in truth), as the same throughout the American Life era.

Fearless, she took her talent to the people in 2004, not only in stadiums across the globe but also into the homes of anyone willing to watch. The Re-Invention Tour marked the first time she admitted to the action, because though she had evolved, she’d never reinvented herself before. But with the help of Steven Klein and Arianne Phillips she did exactly that. Dressed like divinity, she captured it all on the sequel to her luscious and lucrative documentary, Truth or Dare. This round was titled, 'I’m Going to Tell You a Secret,' and she told many throughout. She revealed her enduring love for dancers, her heartbreaking affection for Guy, her musing and motherly ways, as well as the spirituality of her work. Finally she saw the value of her back catalog, and on the stage she dusted off these classics to let them shine. In addition she revealed the light that emanated through her latest album. American Life in excess to its diatribes and devotions was also a sermon. Not the straightforward kind accompanied by a wagging finger and a moral checklist. No, the kind of sermon concerned with the underlying beauty evident in all things. Originally the album’s working title was, 'Ein Sof,' the idea of nothingness. Stemming from her studies of the Zohar, this idea of nothingness related to a divine sort of absence. Meaning: existence prior to the created universe; the ineffable breath of deity. Heavy stuff no run-of-the-mill pop-tart ever thinks about. Thus proving that Madonna was not only otherwise, but that her attack on Western ideals came from more than a point of privilege. They originated from enlightenment; an expanded mind that saw what really mattered and was eager to open others eyes. Therefore like Esther, her Hebrew name, she begged that her people be freed from the gallows. Alas they hung themselves.

No matter how much depth Madonna offered throughout the American Life era, little was unearthed. This tends to happen during moments of true greatness. The zealous populace crucifies its saving grace. Having built so many crosses throughout her career, they finally nailed her to one. But like the biblical lead she rose again. Confessions whipped the crowd back into shape, and Hard Candy kept the coffers bright and bounteous. They had given her four minutes to save the world, and so she kept the apocalypse at bay. Since then, MDNA traversed across the globe, performing 88 sold-out shows from Tel-Aviv to Germany, and Abu Dhabi to Ottawa.

The girl from Bay City who took a bite out of the Big Apple has revolved. And bang! Everyone has forgotten about the passion they put her through. They have want, they want again: blond ambition. Little do they know how ambitious she was for that decade old experiment: 2003’s American Life.

On April 22nd the album celebrated its tenth anniversary. And Madonna’s commemorating the event not with tin, but rather pure polycarbonated plastic. In other words the MDNA Tour is being released on Blu Ray and DVD. This pinnacle piece from the fourth age has been eagerly awaited, and rightfully so. It captures her present success and offers it up for grabs. But lest we forget that time gone by when the Queen of Pop was obscene...but not heard. 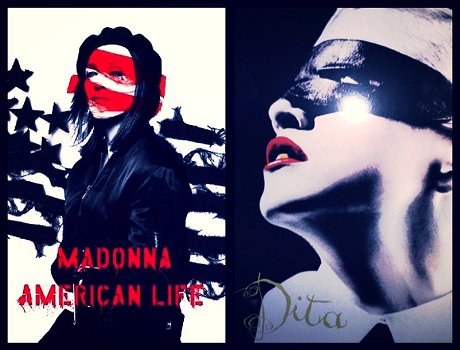