Here is a look at the Rebel Heart Tour ticket for Madonna's Berlin show. At least this ticket is slightly more exciting with the proper tour logo on it! Thanks to Andy. 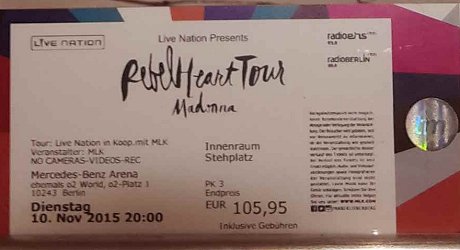 She's one of the most famous women in the world, but even Madonna has her secrets.

Luckily for listeners, the 'Living for Love' singer was in a sharing mood when she appeared on Howard Stern's SiriusXM radio show Wednesday. At one point during their 83-minute conversation, Madonna revealed that she once dated rapper Tupac Shakur. 'I was mad at [David Letterman] when I said the F-word a lot. I was in a weird mood that day. I was dating Tupac Shakur at the time and the thing is he got me all riled up on life in general. So when I went on the show I was feeling very gangsta,' she explained.

Madonna was referring to a 1994 appearance on CBS' The Late Show With David Letterman. Shakur, sadly, was shot and killed on Sept. 7, 1996, after attending a Mike Tyson boxing match in Las Vegas.

Stern had never heard about their romance, while Madonna said she thought it was public knowledge. An unauthorized 2007 biography called Madonna: Like an Icon claimed the two briefly dated one year before Shakur's death. In 2014, Rosie Perez told Wendy Williams she played a role in introducing them.

Here are five more revelations from her interview:

1. She was never jealous of Warren Beatty's famous exes.
'Yes, he was [an incredible lover]. I'm not going to lie,' Madonna said of her ex. Though Beatty dated the likes of Brigitte Bardot, Julie Christie and Elle Macpherson, she said, 'I have confidence in my skills.' Beatty also inspired Madonna's 1990 'Vogue,' which she wrote in just a few hours. ''I had seen people voguing. Warren asked me to write a song for Dick Tracy and I was thinking about all of the movie stars," the 'Ghosttown' singer recalled. "Warren grew up in that era and he dated all of Hollywood, basically.''

2. She felt a kinship with Michael Jackson.
Madonna brought the King of Pop as her date to the Academy Awards in 1991, and they stayed in touch over the years. 'I could certainly relate to him on many levels, but he was also a very shy person,' she said. 'He was famous since he was a child and didn't really have a childhood. He was painfully shy.' They were able to bond over their unusual lives, she recalled. 'We didn't really have a relationship about me revealing myself to him, but making fun of the crazy world we were living and working in. We didn't talk about our childhoods....I think he felt eternally tortured. It was hard for him to look into people's eyes.'

3. She was told her career was 'over' after performing 'Like a Virgin' for the first time.
When her shoe fell off during the show, she tried to get it back. 'I just dove for [my shoe] on the ground, my dress went up and my butt was showing....and I didn't know my skirt was up. So I proceeded to sing the song laying down on the ground. I was just making the best of a situation, which is what I do,' Madonna said. 'After I got off stage, my manager was white as a ghost. He looked at me and he said, 'Do you know what you just did?' I looked at him and I said, 'Yeah, I lost my shoe onstage.' And he was like, 'No, your butt was showing for the entire song.' And he looked at me and he said, 'Your career is over.''

4. She dumped artist Jean-Michel Basquiat beause of his heroin addiction.
Recalling her relationship with the late artist in the '80s, Madonna said, 'We always think we can fix people and we can't....just change yourself.' After the pop singer ended their relationship, Basquiat demanded his ex return all the paintings he'd given to her as gifts. 'I loved him,' she recalled. 'When I broke up with him he made me give them all back to him, and then he painted over all of them black.'

5. She no longer does drugs.
'I tried some ecstasy in the '80s, but I felt so ill for so many days after taking it. It wasn't worth it,' she explained. Madonna doesn't smoke marijuana, either, saying she's not an 'herbalist' and never will be. She does drink alcohol on occasion, however. 'I'm pretty fun when I'm drunk,' the Grammy winner said. 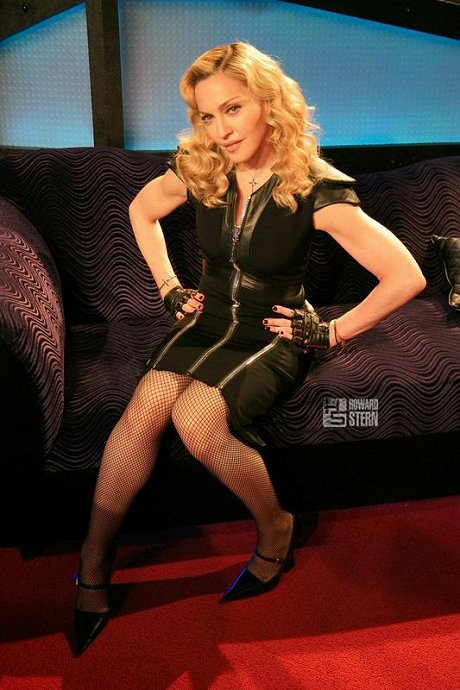 Here is a look at the French FNAC Special Edition of the Rebel Heart (Deluxe) CD which features two extra Living For Love remixes on a separate CD (in a cardboard sleeve). 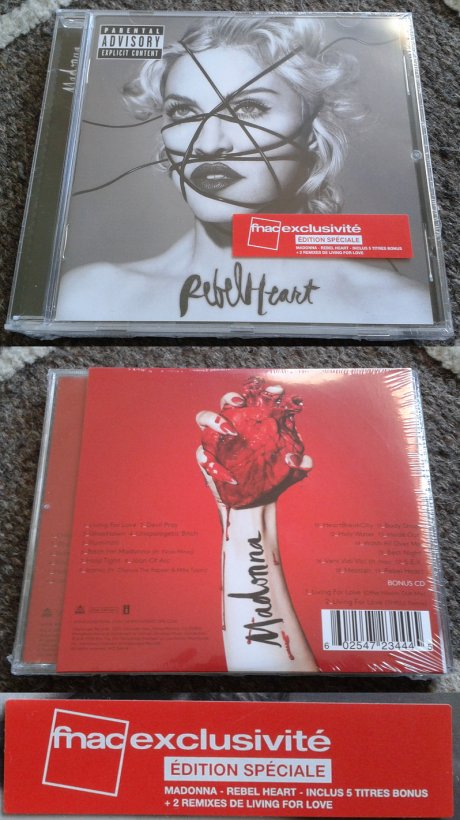