Madonna is keen to recreate her infamous kiss with Britney Spears, nearly 20 years after they first locked lips.

Not only that, the 63-year-old would love for the Toxic singer, 40, to join her on the road on tour in the future.

Taking part in an Instagram Live session with fans, a follower questioned the Hung Up singer on whether she wants to tour again sometime soon.

‘Hell yeah. I’ve got to. Stadiums baby,’ she replied. ‘Me and Britney, what about that? It would be really cool. We could reenact the original kiss.’

Madonna leant in for a kiss while on stage at the MTV Video Music Awards, in 2003, sending the audience and viewers watching on from home into a spin.

Following their embrace, she also kissed Christina Aguilera as they continued their joint performance.

However, while appearing on the live, she admitted that she wasn’t sure whether Britney would want to join her.

Aside from plans to head back on the road, the Queen of pop has been busy getting a movie about her life and incredible career off the ground.

During the pandemic, the Like A Virgin musician focused on making the project a reality, and previously said: ‘I want to convey the incredible journey that life has taken me on as an artist, a musician, a dancer [and] a human being, trying to make her way in this world.

‘The focus of this film will always be music. Music has kept me going and art has kept me alive. There are so many untold and inspiring stories and who better to tell it than me. It’s essential to share the roller coaster ride of my life with my voice and vision.’

All eyes have been on a possible cast for the biopic and Kanye West’s new girlfriend, Julia Fox, has been one of the names thrown around to appear.

Madonna confirmed this herself in a series of snaps on Instagram, showing the pair on a night out with Kanye, Antonio Brown and Floyd Mayweather, with the caption: ‘Went to dinner with Julia to talk about my movie and some other folks showed up……………… [sic].’

According to reports, the Uncut Gems actress is being considered to play the music icon’s pal, Debi Mazar.

Madonna left fans feeling slightly conflicted with her most recent music announcement, doing so in a killer new look.

The singer took to her Instagram Stories to reveal that she was currently working on a series of remixes of her music titled Re-M-ix Revolution.

She then added a snapshot of herself posing in front of a wall in a colorful outfit consisting of a daring combination of fishnets and leather. 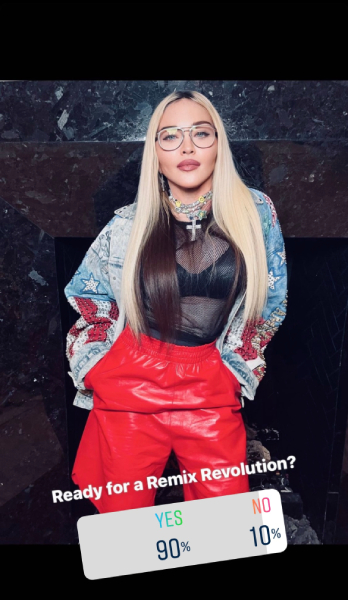 Madonna donned a fishnet top, wearing a black leather bra underneath, that flexed her toned abs. She completed the look with a star-spangled denim jacket and red leather shorts.

With the picture, she added a poll for her fans that read: "Ready for a Remix Revolution?" While many responded in the positive, there were a few who responded with a "No."

Fans have been clamoring for more new music from the pop icon, which she revealed late last year that she was in the recording booth working on, along with several remixes.

She recently took to her feed to share a series of snapshots from her time in the studio perfecting 50 dance remixes to her music.

"In the Stu working on 50 dance remixes with @therealmikedean and a little help from @honeydijon," the Like a Virgin singer captioned her post.

Madonna opted for an all-black outfit consisting of a silk blouse with a mini skirt and fishnet tights, tied in with a pair of combat boots and sunglasses.

While a few responses were more mixed, many fans excitedly reacted to the photos with comments like: "This needs to be the next tour, a proper dance party tour," and: "50 Dance Remixes?! My dream come true!

Madonna's ski trip to the Swiss Alps was a family affair.

On Friday, the 63-year-old singer shared photos from her snowy vacation in Saanen, Switzerland, including a family snap featuring all six of her children.

'Farewell Gstaad……….We will never forget your Mountains or your Moonshine! ❄️⛷🏔🌙 💙🥲,' Madonna captioned the carousel of photos from the trip. 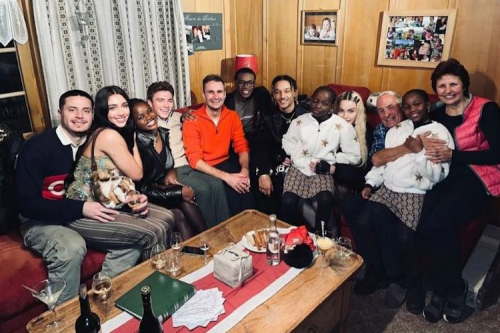 Muthaaaaa has survived 2021……….. ❤️‍🔥. God is Good 🙏. I am eternally grateful for the love and support of my family and friends and the incredible team of people around me that care for and guide me. Never forget that you’re family is your friend…….never forget that without them you are nothing……, But most of all……..and more importantly…..,,,,Never Doubt Yourself.