Madonna has opened up about getting hip replacement surgery last year.

During the Paramount+ Q&A special, Madame X Presents: Madame Xtra Q&A, the 63-year-old fielded questions from fellow A-listers, including Ariana Grande, Amy Schumer, Billie Eilish, and Doja Cat. In one question from Conor McGregor, the Like A Virgin hitmaker was asked how she stays in shape, and in response, she discussed her experiences with chronic pain.

"Let me be really honest with you - I used to be, like, a fitness/workout maniac. You probably know that right?" she told the audience. "During my (2019 Madame X) tour - I don't know if you've noticed it, but I'm limping a lot - I was in more pain that I've ever been in in my life."

The singer called herself a "bionic woman" and revealed she had hip replacement surgery to ease the pain.

The comments mark the first time Madonna has opened up about the surgery, aside from a selfie she posted to her Instagram Stories last year where she put her scar on display.

From Cover News Via Yahoo!

The Madonna special will air on Paramount Plus on Nov. 18 and is hosted by “RuPaul’s Drag Race” winners Symone and Aquaria. Each of the stars appearing pose their burning questions to the star. In the special, Kardashian asks: “Do you have all of your awards show and music video wardrobe, and if you do, do you let your daughter wear any of it?” Kardashian admits she would love to raid the closet “so badly,” and asks the Queen of pop if she could borrow an item to wear one day.

Madame X” was filmed in January 2020 during Madonna’s six-night stand at the Coliseu dos Recreios in Lisbon, Portugal, as part of her 11th concert tour, which marked the first time she had played in theaters and smaller venues since 1985 Like a Virgin tour. The concert opens with “God Control,” and is followed by “Dark Ballet,” with its sample from Tchaikovsky’s The Nutcracker.

The album was released in 2019 and is a collection of 15 new songs inspired by Madonna’s residency in Lisbon, Portugal. “Lisbon is where my record was born,” Madonna said, “I found my tribe there and a magical world of incredible musicians that reinforced my belief that music across the world is truly all connected and is the soul of the universe.”

The Q&A was filmed when Madonna held court at the premiere of the new documentary “Madame X” on Sept. 23 at New York’s Paradise Club at the Edition Times Square.

Madonna made a surprise appearance at the star-studded amfAR Gala Los Angeles to present her longtime friend and collaborator Jeremy Scott with the Award of Courage in recognition of his work with the organization and his commitment to the fight against HIV/AIDS.

The eleventh edition of the annual event was held in an elaborately decorated tent at the Pacific Design Center in West Hollywood on Thursday night after a one-year hiatus due to the COVID-19 pandemic. The gala, which was sponsored by Cadillac and FIJI Water, raised more than $1.8 million for HIV/AIDS research.

Shortly after an Ellen Von Unwerth photograph of Madonna was auctioned off for $70,000, the Queen of Pop herself took the stage and paid tribute to the Moschino creative director with a heartfelt speech, in which she also recalled how she was drawn into the fight against the devastating epidemic.

“In 1991, I stood on the amfAR stage and I was forced to clear up rumors that I had AIDS,” Madonna said. “I recall many journalists sticking microphones in my face, asking me, attacking me even, and saying ‘Madonna, Madonna is it true? Are you HIV positive? ’And of course my reply was ‘no, I just want to help people who are.’”

She continued, “That was an extremely eye-opening experience. I understood then that there was and there still is so much fear. That people thought if you stood next to a person with AIDS, or of course, hugged a person with AIDS, that you could get it. I witnessed how damaging it was. The hatred, the shaming, the fear, the misinformation that surrounded those suffering from this disease and unfortunately that fear still exists today. I’m sure that you are aware of it. I knew in that moment that my fight had just begun.”

The superstar acknowledged that the battle against HIV/AIDs is ongoing, noting that 1.5 million people had been infected with the disease in last year. “The fight is still not over,” Madonna said. “We can never be too complacent when it comes to the silent killer that continues to wreak havoc in people’s lives across the globe.”

Madonna went on to laud Scott’s work to raise funds for HIV/AIDs research from his involvement with the 1999 Life Ball in Vienna to his partnership with the Keith Haring Foundation, (RED), the Trevor Project and amfAR to carrying on the legacy of late Moschino founder Franco Moschino, who passed away from complications due to AIDS in 1994.

“You use your platform, and your platform shoes, to change the way that people look at others who are different, who are unique, who are extraordinary and often marginalized,” Madonna said. “I would say that you are destined for greatness but you are already great.” 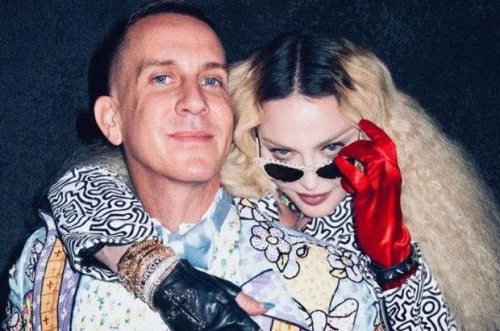 Scott was visibly touched as he embraced Madonna and accepted his award. He recounted being bullied in his teenage years and thinking to himself, “One day, I’m going to be friends with Madonna.”

He said, “It’s hard for others to even understand a time before social media and TikTok and having glimpses into other people’s lives and before a time when Ryan Murphy’s programs proliferated the airwaves with gay characters and cast, and way before Lil Nas X was topping the charts about bottoming, even before there was the term ally.”

“There was only one word that represented a safe haven for young gays boys like me and that word was Madonna,” Scott said to cheers and applause from the audience.

He continued, “On behalf of all the gay boys and gay girls who you made feel seen, appreciated and loved, I am so humbled to accept this honor from the most courageous woman I know.”

On the red carpet, Scott, who was clad in a colorful suit that he said was inspired by “nursery rhymes and stuffed animals and all things cozy and cute”, described how he felt about receiving the award from Madonna.

He told Variety, “I’m beside myself. Out of body experience. Someone who literally when people were afraid to shake the hands of people with HIV and AIDS, she was out there fighting, bringing awareness, she’s lost so many friends. So for someone who has been so much in the fight for so long to come and honor me, it’s just, I don’t have words, I really don’t.”