It’s awards season, and if there’s one winner that should - nay, must - be declared, tout suite, it is ... Madonna’s posterior.

That’s right; the pop legend took to the runway at MTV’s Video Music Awards ceremony last night and knocked it right out of the park in a suitably cheeky, achingly Madonna way: in a floor-length trench coat, police officer-style hat and matching, high-cut bodysuit with short, puffed sleeves (PVC, obviously), to the strains of her 80s hit Vogue. 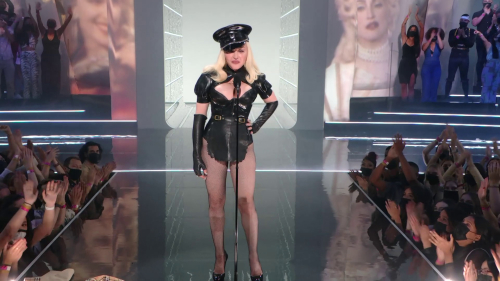 As part of her grand finale, she turned around to sashay back down the catwalk, giving us all a glimpse of her derrière – and she looked fabulous.

Credit should always be given where it is due, and I can’t think of a more glittering, praise-worthy, more bad-ass sentiment than Madonna, at 63, proving that the adage of, “age is just a number” is entirely, eye-wateringly true.

Just look at the way she retaliated to social media speculation in 2019 over whether her marvellous, shapely behind had been surgically enhanced, as reported here: “Desperately Seeking No Ones Approval,” she wrote next to a photo of herself. “And Entitled to Free Agency Over My Body Like Everyone Else!!” Right on, Madge, right on.

And Madonna isn’t alone in sticking two fingers up at the patriarchy - which has long told women that after the landmark of 30, they should abide by some kind of upside-down Victorian maxim of being “heard but not seen” - either. Just take a look at another showstopper of this year’s awards season: Joan Collins.

At 88, not only is she the “new face” of celebrity make-up brand Charlotte Tilbury, but she gave a stunning performance at last week’s NTAs, when she took to the stage to present the gong for best serial drama. Dazzling in a floor-length, puff-sleeved peplum gown, Collins stepped out to the tune of Tina Turner’s Simply the Best and received a standing ovation from the crowd. She then made a cheeky quip about the response, saying that she hoped that it might mean she gets given another series. Bravo, Queen Joan, bravo.

Then, there’s J Lo. Ah, J Lo - I swoon when I look at her, I really do. At 52, she’s still making us all gasp; notably at events such as the Venice Film Festival, last week, when she donned a white, figure-hugging, fishtail dress; leaving her old-new beau Ben Affleck completely in the shade.

But it’s not all superficial simpering, of course - the thing about Maddona, Joan Collins, J Lo, Dolly Parton, Helen Mirren (to name but a few) is that they don’t appear to give a damn about ageing, or age-related expectations. The reason we are smitten with these gorgeous, strong, iconic women isn’t, in fact, anything to do with the way they look, but for their confidence.

Anyone can dress to impress (especially when TV cameras are involved), but few do it so well and completely own it – which really means owning themselves. It’s a rare skill, to inhabit your body and your skin so thoroughly, so genuinely and so completely. It’s the kind of self-assuredness and self-awareness that comes from a life lived well and lived vibrantly – and it’s something that can only truly be gleaned through years of experience. 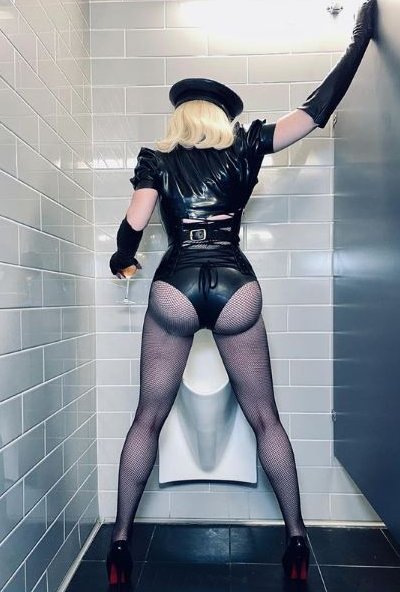 When I grow up, I want to be Madonna’s bottom - or rather I want to be the type of woman to whom a bottom like that belongs; the type of woman who sashays simply because she can, who doesn’t give a monkey’s about what women “should” or “shouldn’t” do; who ignores the shocked stares and gasps and whispers of, “at her age!”

From Victoria Richards / The Independent

Though I will always love her unconditionally, I am saddened on how MXT tickets were handled. Never ever have I put a hold to never get a ticket. I’ve gone to ALL her tours, sometimes, I was lucky to go twice. But this last tour was problematic. Close to one third was cancelled.

As for her latest upgrade 😜, it’s sad to see her focus on this more than her talent. She had the world at her feet as she was iconic mega star making trends, now she’s trying to compete with unrealistic Instagram bodies.

I think she overdid it with the filler. Sure a little surgery here and there is fine. She was stunning 10 years ago, but this looks way overdone.

I have faith the queen will realize there’s a need to reinvent herself again.

Sorry, but I think her bottom looks ridiculous and borders on being... gross.

To all who have posted, you have captured my feelings. "Madonna" was something as a younger person I believed in. I always knew she wasn't perfect, but I admired she always pushed herself to be something more. When her peers when off the deep end, she stayed the course. The Madonna of today, seems cruder, ruder, more self-obsessed, and surrounded by those who push her more and more towards this cliched extreme. It's not just about the plastic surgery (it is easy to judge, but guess what we are all getting older and who knows how we will handle it), it is the whole faux rage against the machine, the entitlement, the repetitiveness, the toxic self-aggrandizing, okay and yes the extreme fake ass.

Everything ends. I never thought Madonna would, but it looks like this is the end, at least for me and those who have posted similar feelings. I wish her the best. It has been a great ride, good and bad, and everything in between. To those who put the time and effort into these fan sites, thank you so much--you were a very special part of my day and to you I am grateful.

Time to focus on my own career more instead of Madonna's.

Jeffery--you said it perfectly. I think I am done at this point too. I am looking forward to Aimee Mann's upcoming album, Duncan Shiek, Morrissey, so many others (who are also far from perfect) but at least carry themselves and their work forward as adults, not cliches.
Thanks to those who put so much work into this as so many other fansites. Madonna was quite a ride and all these sites were always a special part of my day.

Everything ends, I thought Madonna would, and it is always possible she may pull it together, but its been almost 20 years since Confessions and that was the last great Madonna cycle. I won't be checking Madonna news any time soon, time to put that time into my own work, career, and future.
I hope to be back on this site to read good news one day. I really do. Best to all--Stay well!

FAKE is not attractive!

So she moved on from being a superstar to a super bottom? How sad…

As a hardcore Madonna fan it is sad to see what she has become. Everyone I know say the same thing, many even unfollowing her now. She has become a joke, the modern Norma Desmond, and she doesn’t even realize it. It must be wonderful living in a bubble surrounded by yes people. As far as her going back to Warner Music, who cares anymore? I don’t. As much as this pains me to say, I’m done, and by the lack of comment on this website now it seems that everyone else is done also. What a shame. She has destroyed her magnificent legacy.

For decades Madonna stayed grounded when the other megastars turned into nutcases and weirdos, or self-destructed.

It's extremely sad that she's lost the good judgement she once had when it came to style, fashion, movement, songwriting, video performances, and dancing on stage.

She was the matchless expert, the consummate pop star without peer. Yes, even Michael Jackson, talented and unique though he was, didn't have the cultural reach she had, nor did he have the range of creativity she had, or her taste, or her sense of style, or her joy. Madonna reigned across the board.

Far more often than not she looked stunning, was articulate and intelligent, stylish, enviable, and could dance like no-one else. She was sexy, witty, inspirational, aspirational, hungry, genuinely creative, and exciting. A natural leader, bold, fearless, and ceaselessly entertaining, she was captivating. She truly lived up to her status as an icon.

But somewhere along the line, and somehow, she lost her taste, style, good judgement, and artistry. She became a follower, first musically, then in her image, then in her statements, spouting clichés, jumping on bandwagons long after they had departed, and saying unintelligent things. Gone was the Madonna who ploughed her own furrow and lead by example.

On a different note: it's been very nice to see her and Rocco getting on so well in Italy. They seem really close again.