'Artists Are Here to Disturb the Peace': Madonna and ‘Madame X’ Directors on the Doc’s Message

“Artists are here to disturb the peace” is the one thing Madonna wants viewers to take from her upcoming Paramount+ concert film, Madame X, which premiered at the Times Square Edition Hotel in New York City on Thursday.

And if there’s one thing every person on the red carpet could agree on, it was that Madonna is an inspiration, which is fitting when her pop star status remains today as in ’80s and ’90s. Madame X captures the icon’s unique tour, which limited each show to a couple thousand people and sold out theaters worldwide.

“There was nothing between me and the crowd, and that was an incredible experience,” said Madonna, donning a “Trust No Bitch” necklace and “Fuck You” tiara at the premiere, of her Madame X tour. “I needed to document that - the process, the rehearsals, the show itself, what was in my mind, what inspires certain songs. It’s a different show, it’s a different time in my life.”

The concert film gives viewers a look at the Madame X tour through the eyes of Madonna and her fearless persona, Madame X, a secret agent who travels around the world, fighting for freedom. Nuno Xico, one of the documentary’s directors, says that the album is political - featuring songs about gun control, as well as rights for minorities, women and the LGBTQIA+ community - which, in turn, makes the film political as well.

“If you distill the songs, those themes are already there, so to bring those themes [to the film] was easy,” Xico told The Hollywood Reporter. “Madonna is political.”

Apart from her concert film, the iconic pop star also has a biopic in the works, which she’ll direct and co-write alongside screenwriter Erin Wilson, who remembers watching and re-watching Madonna’s Truth or Dare.

The upcoming biopic will follow Madonna’s rise to prominence as the culture-defining artist she is today. Though it’ll detail a different era of her life, there’s one thing she’ll take with her from Madame X to the biopic: her work ethic, with a commitment to “pay attention to detail, to leave no stone unturned, to keep pushing until you get to what you feel is the best possible,” Madonna told THR. “Madame X … is me telling a story about my life.”

From The Hollywood Reporter 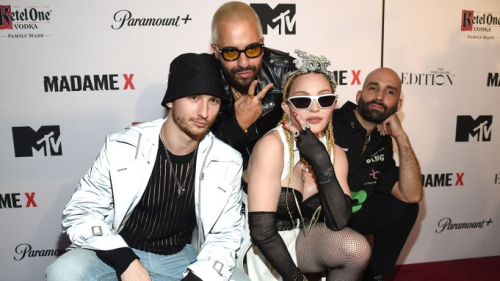 I disagree. Artists need to focus on making art rather than creating chaos and turmoil. Art is supposed to be pleasing or provocative. She's definitely not what she used to be. I would say that her last artistic period was from Confessions on a Dancefloor. Rebel Heart would have been better had she worked with Avicii and not Kanye West.