Madonna says gun control should be the ‘new vaccination’

Madonna has declared gun control the “new vaccination”, arguing that regulation would save lives.

The singer shared a video of herself erecting fly-posters featuring messages including “Wake up America” and “Gun control now”.

The Instagram clip showed Madonna wearing a Pussy Riot-style blue balaclava while shouting “wake up motherfuckers!” and demanding somebody hand her the glue. It was soundtracked by her 2019 song God Control, which is about mass shootings.

The video was captioned: “There’s a new Vaccination! It’s called GUN CONTROL! Should be mandatory. It will SAVE lives!”

Madonna urged fans to “join us next week”. She directed them to the campaign group Everytown For Gun Safety, which describes itself as “a movement of Americans working together to end gun violence and build safer communities”.

Her intervention comes after 13-year-old Adam Toledo was shot dead by police in Chicago after appearing to drop a handgun and raise his hands, and Daunte Wright, 20, was fatally shot by police during a traffic stop.

In a separate post, in which she poses in front of the posters, she wrote: “Adam Toledo was 13 years old, Daunte Wright was 20.

“The officers who killed them are only being charged with manslaughter. This is insanity. Horrific. And yet it has become normalised in our society. Yes – people kill people, not guns. But the vast majority of people are not enlightened and guns are too easy to own.

“If they were outlawed then no one would feel the need to own a gun to protect themselves from those who have guns. As for police killing innocent children: shooting and suffocating and brutalising innocent people ... They should go immediately to jail for the rest of there [sic] lives. No trial, no corrupt justice system.”

The trial of former Minneapolis police officer Derek Chauvin is under way over the death of George Floyd, who was unarmed when he died after the officer kept a knee on his neck for nine minutes.

Last year Madonna was censured by Instagram after sharing a video which claimed a vaccine for Covid-19 had already been found, but was being hidden to “let the rich get richer”.

Instagram blurred out the video with a caption saying: “False Information”.

Among them was the pop star Annie Lennox, who commented: “This is utter madness!!! I can’t believe that you are endorsing this dangerous quackery.” 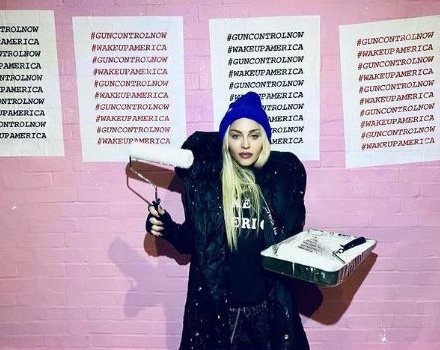 I wish that Madonna would work on QUALITY music or retire and stop opining on things that she knows practically nothing about. She needs to do her research and stop defending CRIMINALS. Also, criminals do not obey gun laws.

The George Floyd case has nothing to do with guns.🙄

I agree with Madonna on this one!!