Madame X Tour: 'The night the lights went out in Paris'

madonnalicious' last show of the Madame X Tour turned out to be memorable for many different reasons.

Sunday night was the second show of the Le Grand Rex residency for Madame X. The previous nights late running rehearsals, as the crew worked to re-block certain sections of the show due to the stage dimensions, meant that the doors did not open until 9:40pm.

Expecting another late night, we were happy to be find doors opened by 7:00pm, however the show did not start till around 11:15pm, and was the 'shortened' version of the show. 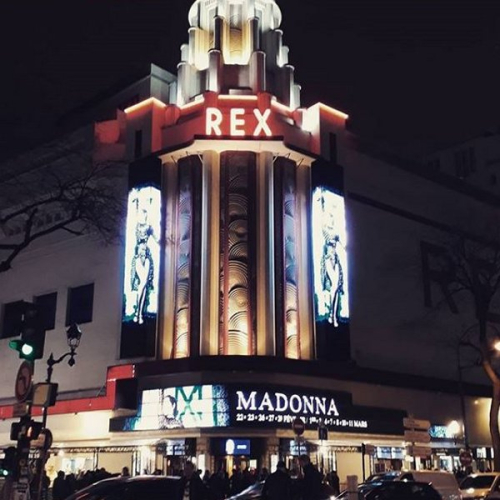 To be front and centre of any Madonna show is an experience like no other, and a great joy to be around some fans who are respectful of each other and their space (unlike some who were clawing, fighting, elbowing and vaulting over seats on their way to get past people).

When Madonna threw her guitar pick into the audience during American Life, to my joy and surprise it landed at my feet and I was able to pick it up! 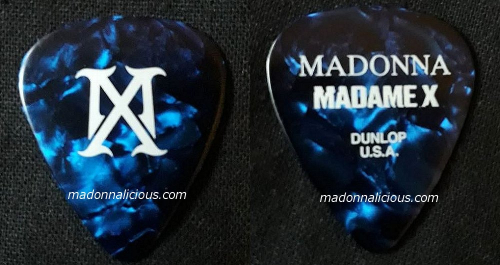 All was going well, until the Cape Verde video was playing, the audio stopped, we looked around at each other, then the power all went out leaving us in a very dark theatre with no clue what was happening. After a minute or so the lights came back up and then Madonna appeared onstage. She explained something had happened with the set for the next section of the show and they were trying to fix it. She was then joined onstage by Gaspar, and told the story of meeting his great-grandmother and how they sang an Elvis Presley song together. Then she sang the Elvis song 'Can't Help Falling in Love With You', this was directly in front of us and a unique experience. She then asked for requests and someone said 'La Vie en Rose' but she said she had forgotten the words. Then she was informed by backstage that the show was ready to start again.

During 'Killers who are Partying' she asked for fans to get closer to the stage (there was about a two metre gap between the front row and the stage), she told security that they should let them closer. However this just caused a huge surge forward and people vaulting over seats, even coming for the back of the theatre pushing forward, desperation in their eyes. Then security moved people back after that song, but Madonna invited people forward again and so it all happened over again and from then on no-one really moved until Madonna's security team cleared the front to be able for her to leave the stage at the end during the 'I Rise' finale. Lots of the show was missed with people being moved about all over the place, with the venue security trying to do their job. 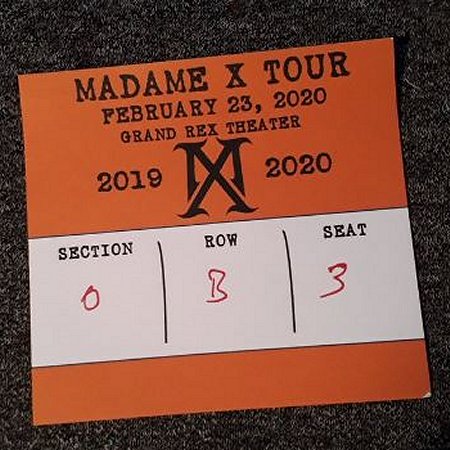 A surprise guest appeared during the Medellin finale, when the last dancer to join her was her son David Banda, and she commented that 'he had been bought up well by his mother'.

At the finale, we managed to get three fist bumps from the dancers (thanks Daniele, Sohey and Allaune) and our Madame X Tour journey was done! A memorable ride from 4th row, back of the stalls, up in the balcony in London and front row in Paris, we have seen the show from all views and it was a wonderful experience.

I got the guitar pick last night in Lisbon,!!

Sounds like a technical/logistical/short-changed disaster to me... as was most of the Madame X tour! For such a control freak, M sure lost her way big time on this tour. The plectrum is a very cool souvenir, though! #jealous

P.S. I wonder if when the DVD/Blu-ray comes out, the actual concert won't start until three/four hours into the disc, with no option to fast forward, just so that you get the full Madame X late-start experience...? ;-)