Madonna performed the third of her 10-night “Madame X Tour” residency at the beautiful Art Deco Wiltern Theatre in downtown Los Angeles on Nov. 16, and the Queen of Pop, of course, came to impress.

She impressed me with her promptness: The show started without incident only 25 minutes after the updated 10:30 p.m. show time. Guy Oseary was in the house, back on the road with M - and keeping her on time? - after traveling with U2 to New Zealand, where he also visited mosques in Christchurch and overall showed up for “our Muslim brothers and sisters.” (Also at the Nov. 16 show? CAA honcho Bryan Lourd with his restaurateur-husband Bruce Bozzi, who snagged the Polaroid Madonna takes on stage for a cool two grand, which she noted would go to support Raising Malawi; director Peter Berg; and SNL alumna Vanessa Bayer.)

She impressed me with her ability to translate her stadiums-and-arenas thing back to smaller-scale venues such as theatres, where she started in 1985 with “The Virgin Tour.” She may be underplaying it, but Madonna is still packing houses wherever she goes and speaking her mind through powerful shows. The Madame X setlist we all know by now remains unchanged; none of the numbers she teased in the lead-up to the tour was included this evening, which began with “God Control,” the sounds of those bullets rallying the audience to their feet and, in spirit, to stand up, yet again…only two days after the Saugus High School shooting in nearby Santa Clarita, for gun reform across the United States of America. “I Rise” provided the perfect bookend to that message, which Madonna let speak for itself throughout the show. (Political commentary was kept at a minimum; there really isn’t anything to add to a song like “American Life,” is there? The audience brought up Donald Trump when she made a joke about small dicks, although she did note that she did move away, to Portugal, shortly after “D.T.” got elected, mostly “to become a soccer mom," but still. The girl has follow-through, no?)

Now…sure, the show is obviously much more contained, but it is no less grand. The staging is primitive; it would be basic to say it’s “basic,” and, in any case, so is Madonna, and so are her crew and her audience. Primitives…there to connect. Elements on stage moved and adapted to impress as well, seamlessly evoking the winds of “Dark Ballet” with M on top of a piano or becoming the fado club of the Queen’s and our dreams. 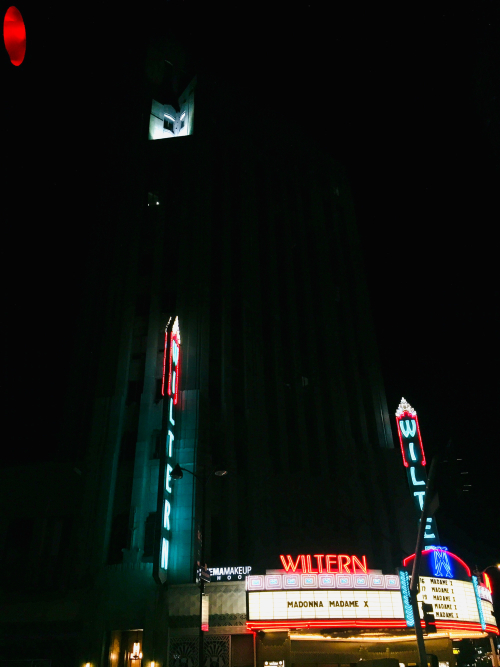 It’s a bit difficult to write about a show that’s meant to be appreciated right then and there (primitively!), you know. By partnering with Yondr, a company that makes sealable bags for cell phones, Madonna has exercised the ultimate control on the modern fan. And you’ll love it. No pics, no vids?! Did it even really happen? It did. I count myself lucky to be among the few who will have had the privilege of being in the presence of Madame X (and I got the T-shirt to show for it, OK).

She impressed me - much like she did 15 years ago when I saw her perform live in concert for the first time in Fort Lauderdale on my first of three “Re-Invention Tour” shows - with her commitment to dance and sing (in English and in Portuguese, ’cause she can), get up, and do her thing, always and forever boldly in her own terms, fuck the naysayers and the haters.

If you have a problem with how old Madonna is, what she looks like, what she sounds like; what she says; what she wears; what she does, what she doesn’t do - well…that’s your problem. Don’t hang your shit on her. She remains someone to admire, and to thank for making life for queer people, for HIV/AIDS patients, for anyone who connects to her lyrics and/or to her most steadfast of messages (to express oneself), that much easier. She does. To deny it is a fool’s errand. She did that. She’s still doing that. And she ain’t gonna stop.

This show is a journey into a moment that demands your attention but also treats you to the thrill of a lifetime, as well as the in situ live representation of Madonna’s journey. Her daughters are part of the show. Her insatiable thirst for knowledge, for experiences that will elevate not only her artistry but others, too (do sing “Hallelujah” with the Orquestra Batukadeiras when they join Madonna for “Batuka” and more), led to this moment. Enjoy it for what it is. I did. And I did loved it.

Martin Haro is a Peruvian writer living in San Francisco. During the aughts, he contributed Madonna show reviews and scoop from Miami to madonnalicious. He currently writes about social issues, art, and, of course, about Madonna at King of Cups

My only correction would be that I saw The Virgin Tour in an arena that held 16,000 people in Tempe Arizona. So I'd venture to say this is her smallest tour ever. Great review though.