After touring arenas and stadiums for much of the last four decades, Madonna is experimenting with a new format for her live shows, playing mini-residencies in theaters around the world.

The Madame X Tour kicked off with a sold-out 16-show run at Brooklyn’s Howard Gilman Opera House (the theater is one of many facilities at BAM, the Brooklyn Academy of Music). Averaging less than 2,000 seats per night, Madonna played to intimate audiences over the span of a month. According to figures reported to Billboard Boxscore, the shows combined to gross $9.6 million and sold 31,401 tickets.

Playing such intimate shows means that the extended stay at each venue is necessary in order to capture the wide-ranging audience that Madonna has previously been able to reach in just one or two shows per city. Her last venture in New York was a two-show stint at Madison Square Garden, where she grossed $5.2 million and sold 28,371 tickets on the 2015-16 Rebel Heart Tour. Further, she hit Yankee Stadium on Sept. 6 and 8, 2012, pulling in $12.6 million from 79,775 tickets - more than twice the attendance of her 2019 theater run, playing one-eighth of the shows.

Though reports through Madonna’s 1993 The Girlie Show World Tour remain incomplete, the Queen of Pop has racked up an incredible $1.3 billion gross from 11.5 million tickets over 516 reported shows, making her the second highest-grossing soloist in the history of Billboard Boxscore (she is the highest-grossing female artist, while Bruce Springsteen is No. 1 overall).

The Madame X Tour continues with seven dates in Chicago through Oct. 28, followed by multi-show runs in six additional U.S. cities and three European legs. With about 75 shows to go, smart math projects the tour to wrap in the $50 million-$55 million range. But as many of the upcoming venues are larger than the theater at BAM (Chicago Theatre holds 3,500 and The Colosseum at Caesars Palace tops 4,000 seats), the final gross could stretch past $60 million before its March 8, 2020, close at Paris’ Le Grand Rex.

With the highly specialized visual and production elements, Madonna’s Madame X Tour at The Wiltern in Los Angeles will now begin on Wednesday, November 13. The additional nine performances November 14, 16, 17, 19, 20, 21, 23, 24 and 25 will proceed as scheduled.

Due to scheduling limitations, we are unfortunately unable to reschedule the November 12th date. Patrons who purchased tickets for that performance will be automatically refunded. We apologize for any inconvenience.

If the Versace suit fits...wear it!

The world is wild...The path is lonely

Chicago is getting ready for Madame X

Just one day after hanging out with Jonathan Van Ness, Taylor Swift linked up with another member of the Queer Eye cast.

Swift documented the fun outing with a selfie of her and Porowski, as well as other friends, on her Instagram Story, praising the 'Like a Prayer' singer for putting on an incredible performance.

'Thank you Madonna for an outstanding show,' she wrote. 'Shout out to the phenomenal dancers, singers, musicians, set designers, crew, wardrobe, glam and M who gave it EVERYTHING.'

The setlist for the show was packed with tracks from Madonna’s latest album, Madame X, but also included classics like 'Human Nature,' 'Vogue' and 'Like a Prayer.'

After multiple gigs at Brooklyn’s BAM Howard Gilman Opera House, the concert series will have a short residency at the Chicago Theatre in Chicago in late October, then another at Los Angeles’ Wiltern Theater in November.

Last show in Brooklyn...now onto Chicago

Madonna, Bjork and Star Wars will all feature in a new exhibition on the kimono.

The Victoria & Albert Museum (V&A) is planning its first major exhibition on the 'ultimate symbol of Japan' and a 'constantly evolving icon of fashion'.

Highlights will include the Alexander McQueen dress worn by Bjork on her Homogenic album cover.

It will also feature original Star Wars costumes modelled on the kimono, and the Jean Paul Gaultier ensemble which Madonna wore for her Nothing Really Matters video.

The Star Wars costume, a light brown robe of threadbare cloth, was worn by Sir Alec Guinness as Obi-Wan Kenobi in the 1977 film Star Wars: Episode IV - A New Hope.

More than 315 works will be featured in the exhibition, including kimonos especially made for the show.

Curators said Japan itself is enjoying a resurgence of interest in the garment.

Anna Jackson said: 'From the sophisticated culture of 17th century Kyoto to the creativity of the contemporary catwalk, the kimono is unique in its aesthetic importance and cultural impact, giving it a fascinating place within the story of fashion.'

Rare 17th and 18th century kimonos will be displayed for the first time in the UK, alongside work by a new wave of contemporary designers and stylists.

Paintings, prints, film, dress accessories and other objects will also feature, as well as Oscar-winning costumes from the film Memoirs Of A Geisha.

Kimono: Kyoto To Catwalk runs at the V&A in London from February 29 to June 21 next year. 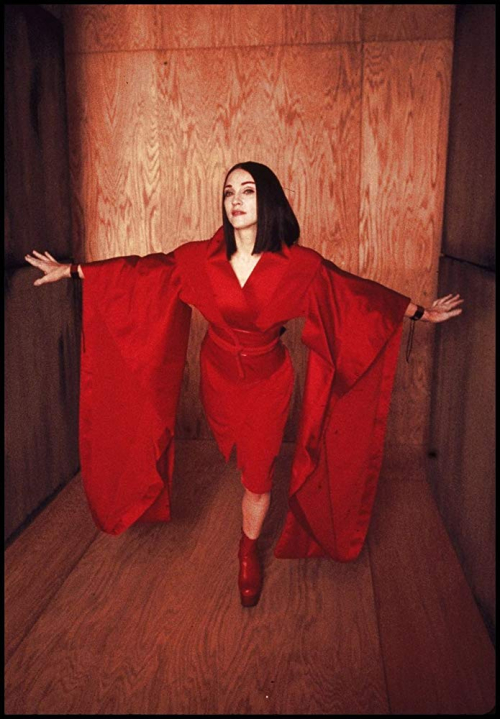 Madame ❌ is also a human being made of flesh and blood

Madonna herself has published this message about the Monday night show being postponed:

Its Hard for Madame ❌ to admit that she is also a human being made of flesh and blood and she must rest for the next 3 days to insure full recovery for her knee.

I am not a quitter. This hurts me more than you can imagine. Its time to take those heels and fishnets off for a few days! 👠. Thank you for your understanding. ♥️. See you very soon !! #recovery #madamextheatre #nevergiveup #ongod

Its Hard for Madame ❌ to admit that she is also a human being made of flesh and blood and she must rest for the next 3 days to insure full recovery for her knee. I am not a quitter. This hurts me more than you can imagine. Its time to take those... https://t.co/JoicIGgM4k pic.twitter.com/BEOWGUOSMd

Madonna is currently dealing with a knee injury and has been advised rest for the next three days to assist in her recovery.

Fans are encouraged to hold onto their tickets pending information on rescheduling.

The Madame X concerts this Thursday, October 10th and Saturday, October 12th are expected to proceed as scheduled.

We regret the inconvenience to fans. Thank you for understanding.

With highly specialized production elements, Madonna’s Madame X Tour date originally slated for Tuesday, October 15th at the Chicago Theatre will now be rescheduled to Monday, October 28th becoming the last date in the 7-show run in this city. There is no change to the performances scheduled for October 16, 17, 21, 23, 24 and 27.

Tickets for the October 15th performance will be honored at the October 28th event. Refunds if required will available via the original ticket purchase link accessed either via desktop or mobile.

Also, the show originally slated for Thursday, October 31st at the Golden Gate Theatre in San Francisco will be rescheduled to Tuesday, November 5th. There is no change to the performances scheduled for November 2 and 4.

Patrons who purchased for the originally scheduled October 31st event will receive tickets with the new performance date of Tuesday, November 5th. Fans who are unable to attend the November 5th performance and prefer a refund, please email tickets@broadwaysf.com and include your order # or call BroadwaySF at 888 746 1799. We apologize for any inconvenience.

Welcome to my Fado Club

On Thursday night the Madame X Tourbook was finally available to buy, madonnalicious reader Rob sent in pictures of the tourbook and this report from the show.

Hi there-wanted to give you a quick update on tonight's show. It started at 11pm, ended around 01:30. Sighted in one of the box seats: downtown nightlife personality Amanda LePore.

Madonna's 4four kids from Malawi all appeared in the show, including David Banda who made a cameo during Medellin. Show was flawless. Madonna sounded great, all were on point.

There was an emotional moment during the section where she sits down next to an audience member in the front row. Madonna joined Oklahoma native Kevin for a mid-show chat and he opened up to her about how her music meant to so much to the people who died from AIDS and then he opened up about how her music helped him through difficult times. She gave Kevin a big hug and seemed genuinely touched.

The other big news is that this show was the first night that the concert program book was on sale ($40) and it is FANTASTIC. There are pages and pages of beautiful photographs, some cut-out dolls, a set of 4 Madame X postcards in an envelope attached to the inner back page, as well as a full page of credits of the crew on the tour. 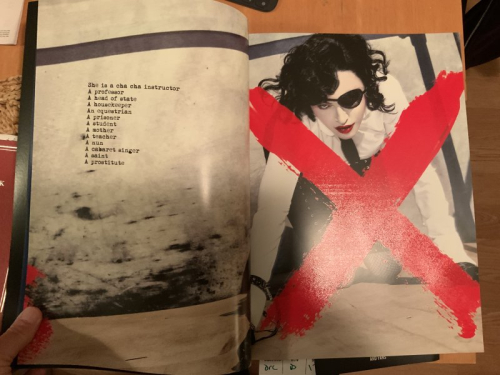 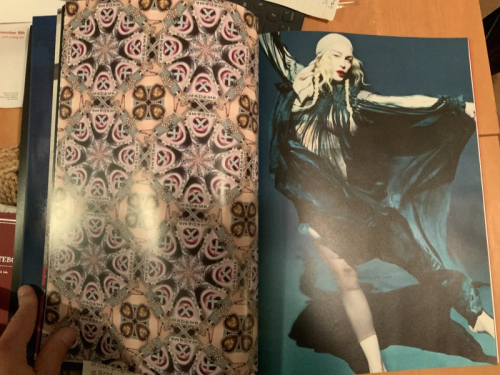 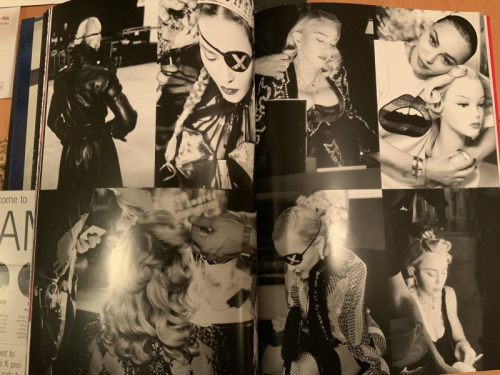 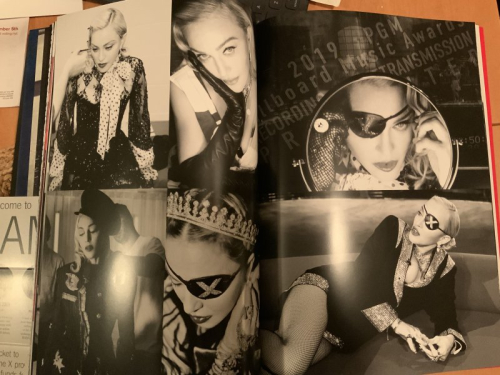 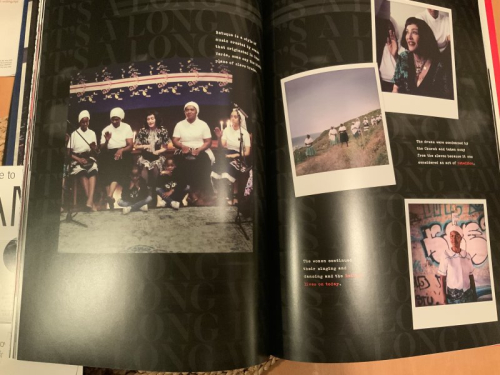 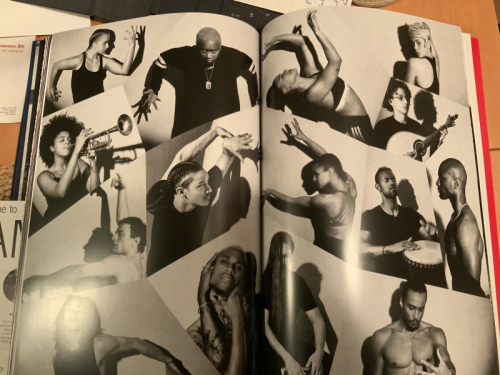 The queen of pop's intimate Brooklyn residency is powerful, empowering, stunning - and one of the best gigs of the year

Madonna has always done what she wants. Roll around the VMAs stage in a wedding dress? Of course. Forego a traditional record deal and sign up with a promoter instead? Sure thing. Skip merrily from sound to sound, even when people tell her she’s “too old” to make whatever genre she dabbles in next? Absolutely. So when Madonna decides to not put herself out on a typical tour - a different arena every night, the whole thing done and dusted in a matter of weeks – you go right ahead and book her residencies in different venues across the globe, allowing her to perform for weeks on end, in one location, in rooms far smaller than anyone in 2019 has any legal right to witness her in.

Pop’s most rebellious star does just as she pleases during the first round of the ‘Madame X’ world tour at the plush Howard Gilman Opera House too. You might expect the world’s biggest pop stars to have their audience out the door by 11pm but, by the time the clock strikes that hour in Brooklyn, Madonna’s only just come on stage. Not that anyone minds - there are a few outbursts of impatient claps and cheers in the time leading up to her arrival but the overriding atmosphere in the venue is one of pure excitement as people - in their finest gowns, tuxes, and vintage Madonna merch - sip wine from plastic beakers and hover in the select zones were phone use is allowed (all mobiles are locked in pouches for the entirety of the show).

The late start is immediately worth it. The show is a mind-blowing riot of theatrics and powerful political messaging, opening with a quote from James Baldwin being banged out onto a screen laid over the stage by a silhouetted woman at a typewriter. Each key press thuds like a gunshot and is accompanied by a dancer jerking and flinching as if he’s been hit by a bullet. “Artists are here to disturb the peace” the message ends before the queen of pop emerges and launches straight into the autotune-heavy anti-gun anthem ‘God Control’.

Later, a man wearing a gas mask sits down to play a piano, from the top of which Madonna is dragged by two dancers dressed as truncheon-waving policemen while she screams “Death to the patriarchy!” Women’s rights are a constant theme throughout the show, from the moment she’s joined on stage by a host of women - including daughters Stella, Estere and Mercy James - to chant “I’m not your bitch” to her, changing the lyrics of ‘Papa Don’t Preach’ to “I’m not keeping my baby”.

Read the rest of the review at: www.nme.com/reviews/live/madonna