On Wednesday, the singer released the highly-anticipated music video for her song, God Control - a rousing, in-your-face and politically charged call for gun violence prevention.

In an exclusive interview with PEOPLE, Madonna, 60, called the epidemic of mass shootings in the U.S. “out of control.”

“I made this video because I want to draw attention to a crisis that needs to be addressed. To me, this is the biggest problem in America right now,” she said, adding, “I cannot take it anymore.”

In true Madonna fashion, she pushes the envelope in mixing art and activism. She addresses the horrors of a mass shooting, which she depicts in the video from one of the tracks on Madame X - her ninth No. 1 album to date.

“This is your wake-up call,” she sings in the video, which evokes the disco era of the late 1970s, when Madonna first moved to New York City and went to Studio 54. “We need to wake up.”

To warn viewers about the video’s graphic and violent content, she begins with a disclaimer: “The story you’re about to see is very disturbing. But it’s happening everywhere and it has to stop.”

Moments later, club-goers are shown being shot in a hail of bullets, in scenes reminiscent of the 2016 Pulse nightclub shooting in Orlando, which claimed 49 lives and injured 53, as well as the 2018 shooting at the Borderline Bar and Grill in Thousand Oaks, California, which killed 13 and injured more than 10.

It is tough and shocking to watch - but Madonna says she wanted it that way.

“Seeing the reality, and the brutality of things makes you wake up,” she says. “This is really happening. This is what it looks like. Does it make you feel bad? Good, cause then maybe you will do something about it.” 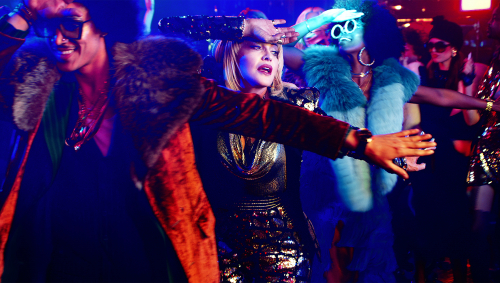 One of the main reasons she made the video was for her kids - and kids everywhere.

“I send my children to school with the same fear every mother in this era has,” says Madonna, who has six children: Lourdes, 22, Rocco, 18, David, 13, Mercy, 13 and twin girls Estere and Stelle, 6.

“As a mother, you feel protective and responsible for all of the children in the world,” she says. “It’s really scary to me that the once-safe spaces where we gather, worship and learn are targets. Nobody’s safe. So of course, as a mother, I acutely feel the worry.”

For the woman who practically wrote the book on stirring up controversy, she is ready with a response to those who might say the video is too graphic.

“I mean, this is reality. People can watch it in action films, and they are okay with it, but when it is about the truth, the reality of what’s happening in our country, why is it too graphic?”

She hopes the video inspires people to take action to find solutions to gun violence.

“It’s a call to action,” she says. “Whatever you can offer, whatever you can contribute can be helpful. It’s twofold: It’s raising awareness and raising money to galvanize, organize and get s- done.”

Shannon Watts, who founded Moms Demand Action, the grassroots arm of the gun violence prevention organization Everytown for Gun Safety, says she is grateful that Madonna is using her platform to raise awareness about the horrors of gun violence.

“It’s really important that she is both raising awareness about the impact of gun violence and urging people to get off the sidelines and get involved to end it,” says Watts.

Says Madonna: “My responsibility is to use my voice to affect change in the world.”

Conversation is great, she says. “But then it has to go to the next level.”