What an event Madonna at MTV was yesterday! Despite being kept in the basement of the Holiday Inn (albeit with unlimited carrot cake) for several hours, no air conditioning, numerous security checks, release forms to be signed and phones being sealed in plastic bags under threat of removal from the building if they were used. 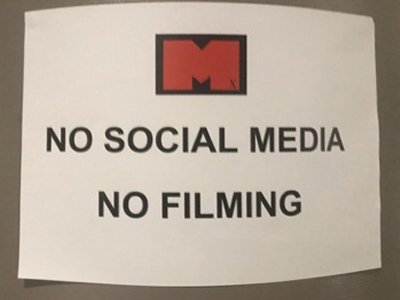 We were escorted across Camden High Street in groups of about 15 people, and like a dysfunctional school trip, we were all encouraged to 'keep together, don't slow down...' as we made it to the studio. The MTV canteen had been converted into a studio with drapes of red velvet, nightclub tables, velvet couches and a large X against the wall. 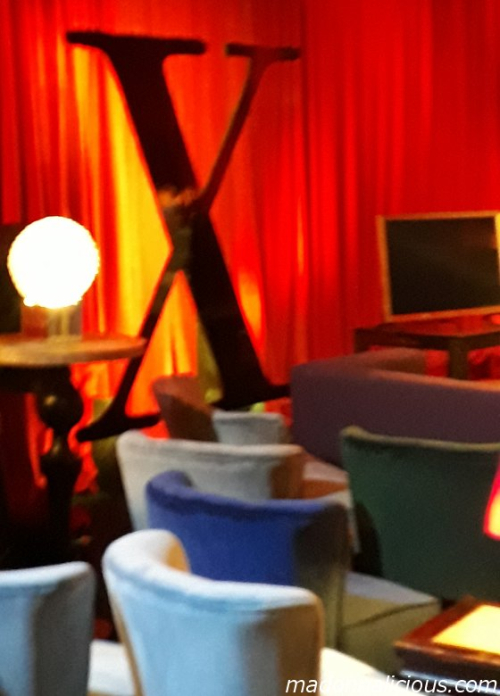 The floor manager ran through what was going to happen, explained the process, and within 15 minutes (and five minutes to broadcast) Madonna arrived. Some last minute hair and make-up checks were done, and Madonna and host DJ Trevor Nelson clinked their champagne glasses. Madonna claimed that Trevor had not taken a proper sip of champagne and told him to do it again, otherwise her whip would be used. 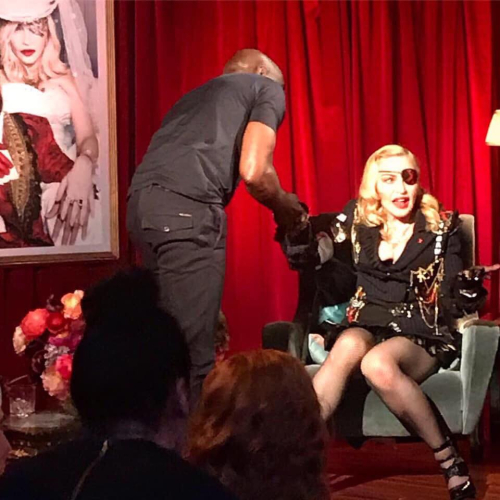 Madonna with Trevor before the broadcast / Picture by Ste

The Q&A session was very rushed (everyone felt we should have least had an hour), Madonna wanted to give lengthy and thorough answers to the few questions that were posed. I am not sure how it appeared on screen, but the delay to the foreign outside broadcast locations, was so awkward, although Madonna's reactions to it were funny.

When the Medellin video was finally played, Madonna got off her seat and crawled onto the floor so she was nearer the TV screen that she was watching during the event.

She also made Trevor read out Madame X's manifesto, and stood behind him, doing hand gestures, grinding, laughing!

After the broadcast she also asked the audience if anyone wanted cha cha lessons, everyone said YES!

At the end of the night, as soon as we were allowed to leave, the phones got ripped out of the plastic bags, and we all took pictures of the studio as we were being encouraged to get a move on out of there!

Below is the one good picture from the night, of the MTV stage set, where mere moments earlier Madonna had been sitting. 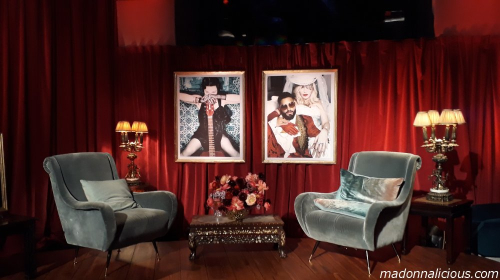 As we were leaving the studio, we picked up the MTV Call Sheet, showing Madonna's timings for the night.

@Wil W: I've yet to see an interview where Madonna hasn't seemed irritated, to be honest. Not a criticism, merely an observation.

Phones were prohibited, but once the event was over and Madonna had left the room it was a free-for-all. Once a couple of people had unsealed their phones and started taking pictures, everyone did!

May I ask you how you got in? Did you win the Icon contest? What was the answer to the question (What is Madame X doing next?)? I didn't get its meaning! :(

The time delay was BEYOND awkward and the questions asked seem staged as she had answered them all on her social media accounts leading up to this interview.When the few questions were asked I screamed at the tv, "Don't you have Instagram??" LOL. They should have tested the time delay, as if they had, they would have scrapped it. She looked awkward in that chair like it was too small. She should have been in a tall chair or something that better accommodated her. The interview part was a total bomb and she didn't look happy at all. I wouldn't be surprised if someone at MTV lost their job today. It should have been AT LEAST an hour and on prime time. It would have fared better with a bigger production value. And in this day and age, the time delay was just ridiculous and, like I said, it should have been scrapped.

The making of this album was a big departure for her and she should have been allowed more time to talk about that process. She had every right to be as irritated as she seemed to be. MTV dropped the ball on this one and my only hope is that Netflix or a major network will step up to the plate and do a special with her to coincide with the release of the album.

Wow, thanks for the recap! So exciting that you could be in the audience! But, if phones were prohibited, where did the candid snaps come from? ;-)