Long before Madonna was named the Queen of Pop, excommunicated by the Catholic Church on three different occasions, and played sold-out world tours wearing next to nothing, she was just Madonna Louise Ciccone, a young girl growing up in a religious household in Michigan.

In those days, as seen in a throwback photo she shared on Instagram this week, Madonna wasn't allowed to wear anything remotely like the provocative outfits that quickly became a staple of her onstage presence; suffice it to say, there weren't any cone bras in her childhood bedroom's closet. In the photo, Madonna and her lookalike younger sister Paula smile at the camera on a grassy lawn on the day of Madonna's high school graduation, likely in 1976 or '77. They each wear brightly patterned, sleeveless maxidresses that, as she wrote in the caption, they'd made themselves using Butterick sewing patterns. 'I was always so embarrassed we could not afford store bought dresses. In retrospect Im [sic] glad i learned how to use a sewing machine,' she wrote, adding, 'Notice No cleavage or bare knees!! Papa Ciccone was very strict.'

They say all trends inevitably come back around - so there's definitely a chance we'll see Madge rocking knee-covering, cleavage-hiding homemade dresses on her next world tour. (Then again, probably not.)

My Sister Paula and I on my High School graduation day! We sewed our own dresses from Butterick patterns. 👗 I was always so embarrassed we could not afford store bought dresses. In retrospect Im glad i learned how to use a sewing... https://t.co/hE6PJQ3JvP pic.twitter.com/39xiRJjpAF

Madonna, now 60, has previously spoken about that modest upbringing, which doesn't quite jive with the image of her writhing around onstage at the VMAs just a few years after that photo was taken. She once described her younger self to Vanity Fair as a 'lonely girl who was searching for something.' She continued, 'I wasn't rebellious in a certain way. I cared about being good at something. I didn't shave my underarms and I didn't wear makeup like normal girls do. But I studied and I got good grades...I wanted to be somebody.'

Madonna has recorded an all-female orchestra from Portugal for her new album.

The 60-year-old Queen of Pop took to Instagram to share a video of Orquestra Batukadeiras PT singing in the studio for an unknown track on her forthcoming 14th studio album.

Alongside the clip, she wrote: 'A prayer at the end of a magical recording session with the @orquestra.batukadeiras.pt So Lucky to have these Amazing Powerful Women on my record. #caboverde #lisbon #music #magic #mirwais @dinodsantiago (sic)'

A prayer at the end of a magical recording session with the Orquestra Batukadeiras 🇨🇻 So Lucky to have these Amazing Powerful Women on my record. ♥️ #caboverde #lisbon #music #magic #mirwais #dinodsantiago pic.twitter.com/Uvv4IcWRNH

Madonna jets out of JFK airport 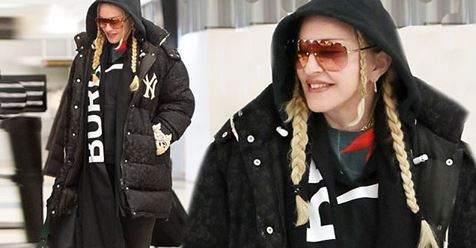 A Feast Awaits You!

Can’t wait to share all all that inspired me in Lisboa!

'Madonna and the Breakfast Club' Docudrama Gets March Release Date

The film starts with Madonna during her early days as a drummer, guitarist, keyboard player, and songwriter for the Breakfast Club. She had formed the group in 1979 with Dan Gilroy, who she had been dating at the time. As the film progresses, Madonna gets more involved with the band’s music, and begins to develop her own identity as an artist.

The docudrama will be split between reenacted scenes from Madonna’s time with the band, alongside recent interviews with Gilroy, his brother Ed, and bandmate Gary Burke scattered throughout the film. The film was produced by Guy Guido and Paul Castro Jr., and stars Jamie Auld as Madonna. Auld’s uncanny resemblance to the pop icon is incredibly realistic, and is sure to intrigue longtime fans of the singer.

'We filmed in the same locations Madonna once walked and performed in, incorporating the exact instruments she played, including the real guitar she used to write her first songs,' Guido said. 'It was surreal to capture Jamie in the drama that would eventually lead to Madonna pursuing her solo career.'

While Madonna left the Breakfast Club well before even their first single was released in 1984, the band would go on to some Billboard chart success with the release of their self-titled debut LP in 1987, which peaked at No. 43 on the Billboard 200 albums chart. That set featured the group's biggest hit, 'Right on Track,' which hit No. 7 in March 1987.

The film is set to release across digital and video on-demand platforms by The Orchard on March 12.

The play, which focuses on sexual relationships between mixed-race couples during the era of slavery, has earned several accolades and a bevy of admirers which also include composer Stephen Sondheim and Angels in America playwright Tony Kushner.

On Monday, Harris, 29, used Twitter to shut down a report from Page Six that Madonna was lured to the show for its 'full-frontal male nudity.'

'There’s been a lot of fake news regarding slave play,' he wrote, before confirming he and the singer, who brought daughter Lourdes Leon, 'shook hands.'

The play, which aimed to spark conversations about race, history, gender and sexuality in America, was directed by Robert O’Hara and opened at New York Theatre Workshop December 9.

It was recommended for audiences aged 17 or older, due to nudity, sexual content, simulated sexual violence and racially violent language.

The show was ultimately extended an additional two weeks through January 13, 2019, and earned the Rosa Parks Playwriting Award, the Lorraine Hansberry Playwriting Award, The Lotos Foundation Prize in the Arts and Sciences and the 2018 Paula Vogel Award.

While his professional debut was dubbed 'an antebellum fever dream,' by The New York Times, Harris was particularly impressed by the celebrity turnout on Sunday.

'Scarjo, Sondheim, Madonna, and Whoopi. The freaks don’t just come out at night y’all. They come out for slave play,' the playwright, who is still finishing his third year at the Yale School of Drama, joked on Twitter after the final performance.

'I don’t want people to be able to walk away from a play about slavery and say, ‘Oh, well, that’s not about 2018,’' he told the NY Times. 'Being a black body in the world makes you feel kind of insane.'

It’s the falling down that makes you great!

I remember this moment like it was yesterday.............💕🌸 i was just looking for my shoe and in the blink of an eye everything changed and thats how life is!! So you need to be ready. And you need to know what you want to do when you find that shoe. 👠! It’s the falling down that makes you great! #likeavirgin. 💍💍💍.

I remember this moment like it was yesterday...💕🌸 i was just looking for my shoe and in the blink of an eye everything changed and thats how life is!! So you need to be ready. And you need to know what you want to do when you find that... https://t.co/CX7BkyblS6 pic.twitter.com/5GHnzIMI6R

One Song: Madonna's 'What It Feels Like For A Girl'

Chad Clark of Washington City Paper published this re-appreciation of Madonna's 'What It Feels Like For A Girl':

I wanna talk about Madonna’s elegiac 'What It Feels Like For A Girl.' At this post-Brett Kavanaugh juncture in American life, I think it’s a fine time to appreciate it.

'What It Feels Like For A Girl' was the low-key, musically understated third single from Madonna’s Music album.

Released in 2000, Music followed 1998’s ambitious, resplendent Ray Of Light. For Ray Of Light, Madonna selected William Orbit as a collaborator, which was at that time considered a left-field choice. Orbit was an eccentric, progressive composer and musician who was best-known for his own curious amalgam of classical and electronic music. Interesting stuff, but the dude definitely did not have any hits. Madonna adored his work and commissioned Orbit to produce, which was a nervy move. It paid off with a gorgeous masterpiece that, while not her greatest commercial success, certainly did sell well. Five million copies in the U.S. and 11 million globally.

When it came time to make a follow-up album, Madonna once again zigzagged. She chose yet another collaborative team, headed by French producer Mirwais Ahmadzaï. She didn’t rebuke Orbit—he was invited to participate in a minor, supporting role—but she did not attempt to duplicate the alchemy of Ray Of Light. When you’re a chart-topping artist like Madonna, there is a lot of incentive to play it safe: Last album worked out great! Let’s do that exact same thing again!

To read the rest of the article visit: www.washingtoncitypaper.com/arts/music/blog

Madonna hit back at reports she has had bum implants with a straight-talking Instagram post about “not seeking approval” and “having agency over her body”.

Fans questioned whether the Queen of Pop has used cosmetic procedures to enhance her derriere after videos of her performing on New Year’s Eve emerged, showing off a plump posterior.

Madonna, 60, sparked a frenzy when footage of her duet with 13-year-old son David Banda at a New York gay bar was posted on social media.

As the pair belted out hits including Like A Prayer and I Can’t Help Falling In Love With You, fans couldn’t help but notice Madonna was sporting a behind to rival Kim Kardashian’s.

Fans claimed her alleged butt implants were 'the saddest ending to 2018' while others accused her of looking 'ridiculous'.

In the past, Madonna has treated the world to glimpses of her behind having worn revealing dresses to the Grammy Awards in 2015 and the Met Gala in 2016.

The star even flashed fans in a cheeky Instagram video after a party at last year’s Met Gala.

From the Evening Standard

Kicking off 2019 with Music and Prayer At Stonewall Inn

Madonna spent her New Year’s Eve at New York’s historic Stonewall Inn, where she surprised those in attendance with a rousing speech, as well as a brief performance.

The singer was recently appointed an ambassador for Stonewall, in the lead-up to the 50th anniversary of the Stonewall riots, a defining moment in the pride movement and fight for LGBT+ rights and equality.

Footage has since emerged from Tuesday night, showing Madonna addressing the crowd at the iconic venue, as 2018 drew to a close.

In her rousing speech, which she read from rainbow-print cue cards, she said: 'I stand here proudly at the place where pride began, the legendary Stonewall Inn, on the birth of a new year. We come together tonight to celebrate 50 years of revolution, 50 years of freedom fighting, 50 years of blood, sweat, and tears. Can I get an amen? 50 years of sacrifice, 50 years of standing up to discrimination, hatred and, worst of all, indifference. And it all started here, at Stonewall. Let us never forget the Stonewall riots and those who bravely stood up and said enough. Enough brutality. Enough violence inflicted on this community. Enough stigmatism. Enough pain and suffering. 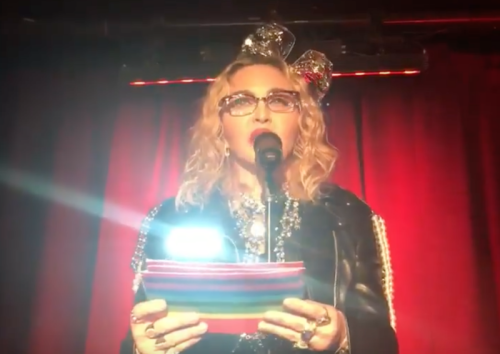 Following this, she also gave a brief performance of Elvis Presley’s ‘Can’t Help Falling In Love’ accompanied by her youngest son David, as well as her own hit ‘Like A Prayer’.

It’s set to be a busy year for Madonna, who is set to release her 14th studio album later in 2019. The upcoming release will be her first in four years, following 2015’s ‘Rebel Heart’. 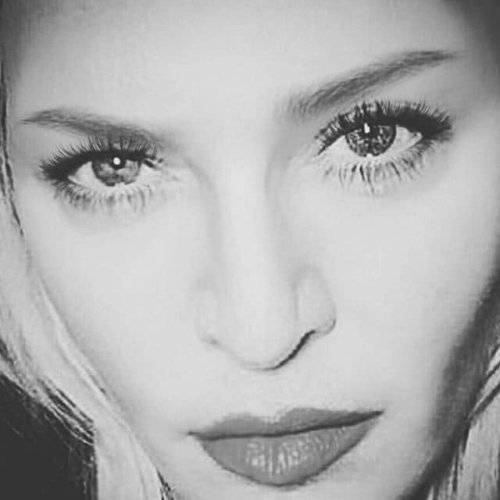