Loving the cover! Madonna is featured on her first UK cover of 2019 with the January issue of Classic Pop magazine.

Should be in UK stores now but if you cannot find it in the shops then order single issues at anthem-publishing.com/classic-pop/single-issues 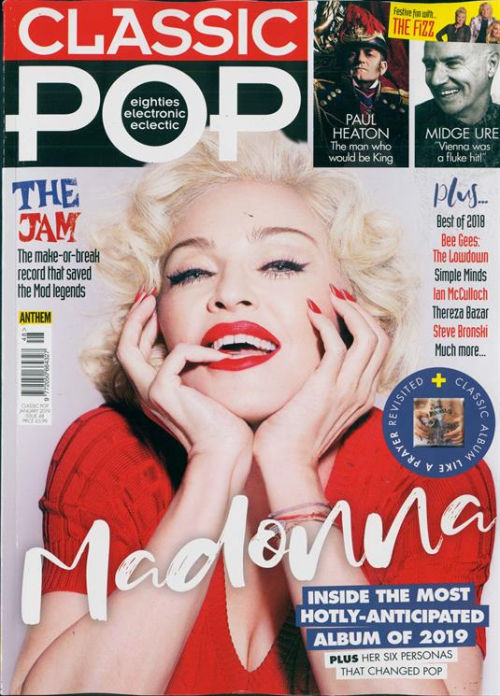 Madonna is to appeal against a judge's decision to dismiss her objections to her apartment building's rules on having kids at her home.

The 'Material Girl' hitmaker sued officials at the Harperley Hall co-operative building in Manhattan back in 2016 objecting to a 2014 change in leasing rules. The new conditions of her lease prohibited her children and domestic employees from living in the luxury $7.3 million (£5.7 million) unit unless she was 'in residence'.

Madonna's suit was originally dismissed last year (17), as she had filed it too late after the rule change. She continued her legal fight by requesting documents detailing how her lease was changed.

Judge Gerald Lebovits denied her requests and in November he formally tossed her lawsuit. However, according to the New York Post the 60-year-old musician filed a notice of appeal with the Manhattan Supreme Court on Wednesday, December 26, asking for the decision to be reversed.

Madonna, who has six children, claimed the home was her primary residence and that her status as an international popstar made it impossible for her to stick to the new conditions.

'Such a requirement is ridiculous and impossible for almost any family to comply with, and certainly not someone with plaintiff's itinerant schedule,' legal documents filed as part of her original case state.

She stated that the Harperley Hall co-op knew of her superstar status before leasing her the apartment, and so had no right to change the conditions of her lease in a way that clashed with the demands of her profession.

Merry Christmas from the Queen of Pop and her 'unicorns'!

Madonna shared a photo of herself with four of her six children on Christmas Day during which they were all smiles as they sat on the couch together. The singer, 60, can be seen wearing a black fur hat for the occasion.

'Merry X-mas from Mambo and 4 of her 6 unicorns!' the mother of six captioned the photo. 'Sending Much Love 💜💜💜💜💜💜 and many prayers for peace on Earth!'

Happy Christmas! 'A girl can dream, can't she?'

Madonna had previously been represented by BB Gun Press, which was founded by veteran music publicist Brian Bumbery - he left for Apple to head up publicity for Apple Music in August, Variety reported. Prior to that, she had been represented for more than 20 years by Liz Rosenberg, who runs her own New York City-based shop with a roster that includes Cher and Michael Buble.

According to an insider, Madonna was looking at several top public relations firms in search of a company that could provide a 'team' of support. Indeed, in Bush Novak’s Instagram - her account is private - announcing the signing, she notes, 'As a life-long fan of this incredible artist, I’m proud to share I’m leading a passionate team at ID for Madonna.' She thanks Oseary, who also manages U2, 'for the opportunity.'

You cannot stop Art by trying to Shame it

I am 19. Living in NYC 🗽. A student at Martha Graham School of Dance. ❌ I modeled For Art Schools around the city to pay the rent. Painting, Drawing and Photography classes. Many of these photos were sold to Playboy and Penthouse when I became famous. The Photographer’s. Exploited Me and then the Patriarchy tried to Shame me for Being Naked. I told the Press 'i Was Not Ashamed' and this became headline news. And this turned into A collaboration between Warhol and Haring! 🎉. I am the proud owner of 4 of these paintings. Given to me later. as a wedding gift. 🎁. You cannot stop Art by trying to Shame it. Creation always wins. 🌈 #lifeisacircle #art #dance #music #life #creation

I am 19. Living in NYC 🗽. A student at Martha Graham School of Dance. ❌ I modeled For Art Schools around the city to pay the rent. Painting, Drawing and Photography classes. Many of these photos were sold to Playboy and Penthouse when I became... https://t.co/5E4gXqr691 pic.twitter.com/YqydJUmZsZ

Madonna Remembers Penny Marshall: 'Your Talent Was as Big as Your Heart'

Madonna has paid tribute to Penny Marshall, the trailblazing filmmaker who directed the Queen of Pop in A League Of Their Own.

The pair bonded while shooting the popular 1992 baseball drama, for which Madonna wrote and performed the end credits song 'This Used to Be My Playground.' The song hit No. 1 on the Billboard Hot 100 chart and garnered Madonna a Golden Globe nomination for best original song.

'Lucky to have known you and worked with you Penny Marshall,' Madonna writes in an Instagram post. 'Your Talent was as BIG as your Heart! And you were a Trailblazer for Women In Hollywood. GOD BLESS you and your family!'

The message is accompanied with a photo of the pair looking relaxed on set, with Madonna in full costume as her feisty character Mae Mordabito. 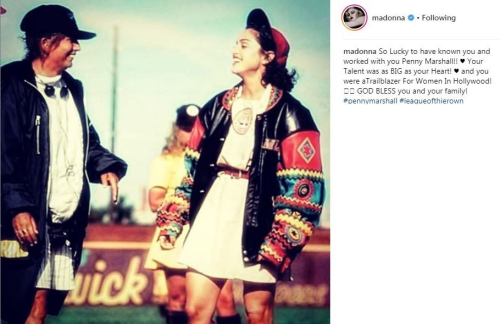 Marshall, who starred with Cindy Williams in the ABC sitcom Laverne & Shirley, and went on to direct Big, A League Of Their Own and other films, died Tuesday (Dec. 18) from diabetes complications at age 75. She made history with Big, by becoming the first female to direct a movie that grossed over $100 million.

Fans worldwide can buy the 2019 Madonna calendar now priced at £9.99 (with free first class shipping for UK fans) from www.danilo.com

A portion of the proceeds from this calendar will be donated to Raising Malawi. 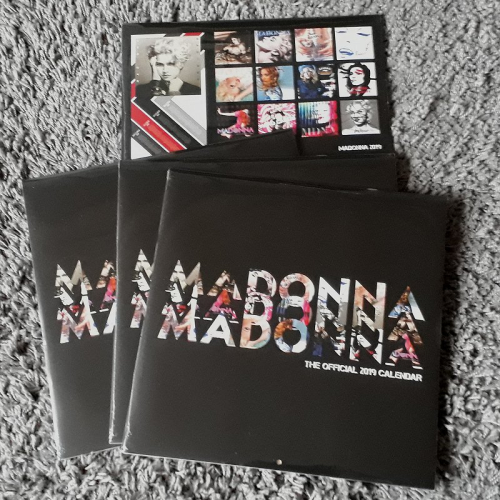 Prince Charles' FURY at Madonna and Celine Dion: 'YOU'RE NOT ROYALTY'

Some celebrities are related to kings or queens while others have distant cousins in the royal family. While Meghan Markle was preparing to become part of England’s royal family, she found out that she and Harry are cousins, as in very distant 17th cousins via King Edward III. Even talkshow host Ellen DeGeneres is related to Kate Middleton and Queen Elizabeth II.

According to the New England Genealogical Society, the funny lady and the Duchess of Cambridge are 15th cousins as they are each direct descendants of Edward III of England.

According to the website, Ancestry, US pop queen Madonna, Canadian singer Celine Dion and Camilla, Duchess of Cornwall, are all descended from the same French carpenter.

Records spanning more than 300 years from 1621 were published on the family and social history website Ancestry and revealed the unlikely link between the three women.

Camilla, the second wife of Prince Charles, Britain's heir to the throne - Madonna and Dion are all descended from French carpenter Zacharie Cloutier, according to the website.

'The fact that Camilla and Madonna are related, however distantly, highlights the truly unpredictable and entertaining nature of family history research,' said ancestry spokesperson Simon Harper.

However, Prince Charles has blasted this report in a bashful letter addressed to both Madonna and Celine Dion.

The explosive letter, published in 'The Prince Charles Letters' in 2011 informs to two pop queens that this information is 'so bally tenuous as to be barely worth mentioning'.

The Prince adds: 'Some might say I should ignore this sort of thing.'

However, Charles states in the letter that he is 'convinced that it’s all part of a ‘drip, drip, drip’ process that threatens to erode the monarchy'.

The letter, published on April 20, 2008, suggests that the website Ancestry are 'bent on mischief-making against the Royal Family'.

To end this, Charles drafted an open letter to the media detailing this this revelation is 'nonsense'.

Finally, Charles informed Madonna and Celine Dion that he would assume their approval of him 'scotching' the report should they choose not to reply to his letter.

In the letter he drafted for them to approve as words of their own, he included the line: 'We're not Royalty and we never will be.'

Jewellery designer Jade Jagger has released a new collection called Madonna, dedicated entirely to the pop star. 'She is one of those girls that when you were young was an icon' Jagger told Insider. 'I love strong women and Madonna in my eyes is the epitome of strength and style.' 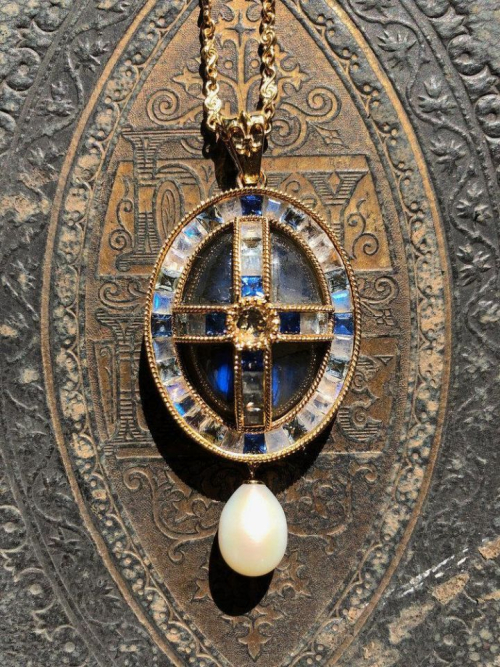 Jagger was previously creative director at jewellers Garrard before launching her own-name brand, which has been worn by celebrities including Rita Ora and Cara Delevigne.

Jagger thinks the taste for handmade jewellery is stronger than it's ever been. 'Natural handmade products are always going to be at the front of my sense of luxury.'

All of Jagger's jewellery is crafted from precious metals and gemstones individually sourced from her long-standing suppliers in Jaipur, India.

Jagger was among the celebrities who recently hit Florida for Art Basel Miami Beach, where she hosted a L'Eden by Perrier-Jouët event at Faena Hotel.

From Evening Standard Via Yahoo! News

So excited to play new music for you!

So excited to play new music for you! 🎶🎤🍾🌹 Until then Use you imagination! 🔥❌🔥❌🔥❌🔥#magic #music #mirwais #mikedean pic.twitter.com/QVLPsPF5Dg

Today is #WorldAIDSDay. ❌ Let’s pause and reflect. We have lost so many incredible people❤️ to this disease and yet we have found no cure. 🙏🏼 Please GOD in this lifetime. #Wakeupworld 🌎 🌍🌏 #globalfamily. Art by @luke_lann pic.twitter.com/Xauh0563kw

In my apartment on the L.E.S. Where i lived with my best friend Martin Burgoyne who died of AIDS. I held his hand as his spirit left his body. He was so beautiful and talented and full of Life like so many others. ♥️. In those days it ravaged people... https://t.co/cuPYeqJoJL pic.twitter.com/gPC0gmxgkw

With My Good Friend Keith Haring ♥️ He was a big AIDS activist when everyone was calling it GAY cancer. I was with him the day he died of AIDS. He said what hurt him the most was how people did not want to touch door knobs after he touched them... https://t.co/MOciXOfkMy pic.twitter.com/E4e3Kf4E5s