Madonna was photographed leaving the Casa Cruz restaurant in London on Thursday night. For more pictures from the night visit: www.dailymail.co.uk 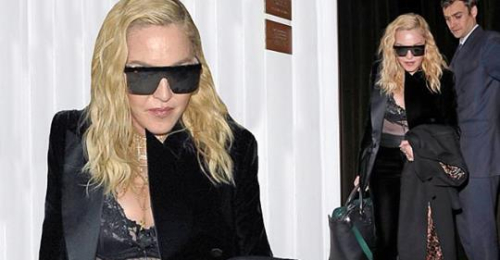 If we knew then what we know now

As i wait to finish my new record and think about the future, i can’t help thinking about the past and the amazing humans that came into my life.........♥️ if we knew then what we know now. #history #gratitude #wisdom #hindsight pic.twitter.com/9BLV2kVQTv

A bored suburban housewife accidentally gets hit on the head, wakes up with amnesia, and is mistaken for a free-spirited New York drifter named Susan.
With Rosanna Arquette and Aidan Quinn

Madonna has shared a rare snap of her six children together as they celebrate Thanksgiving in Malawi.

On Thursday, Madonna posted a picture of her brood as she declared how 'thankful' she was, and said nothing would ever equal 'what she treasures and values most'.

She wrote: 'What I am Most THANKFUL for! My Children have led me down roads and opened doors I never imagined I’d walk through. Fame, Fortune and Records Broken could never equal that which I treasure and value most. #blessed #grateful #family. Happy ThanksGiving from Malawi!'

What I am Most THANKFUL for! My Children have led me down roads and opened doors I never imagined I’d walk through.♥️ Fame , Fortune and Records Broken could never equal that which I treasure and value most. 🙏🏼 #blessed #grateful #family 🌍 Happy ThanksGiving from Malawi! pic.twitter.com/3VIlFYRtug

The Beauty Roller SOLD OUT: Now she can pay for more videos and extra dancers!

The Beauty Roller has SOLD out!! 🌪😂!!👏🏻👏🏻👏🏻. Back on line on wed.! Thanks for your support! 🙏🏼. Now i can pay for more videos for my new record. and extra dancers for my show!🕺🏽💃! What goes around rolls around! #rolllikeaqueen 👑 #beautyroller #mdnaskin #tarinskillets pic.twitter.com/cB6kkzQhZQ

How I get @therealmikedean to Work!

How I get @therealmikedean to Work! 😂 #incentive #moschino #music #magic

Just when you think you know how to drink out of a glass, Madonna comes along and does it better than you. The Like A Virgin singer, and all round queen, took to Instagram to share her unique way of having a glass of champagne - with a spoon. Yes, seriously. The 60-year-old could be seen covered in jewellery, with her hair in braids over her shoulders, as she scooped champers out of a glass with a tablespoon.

Alongside the post, shared with her 12.4million followers, the 60-year-old wrote: ‘Soup du Jour....#midnightsnack.’ That is our type of midnight snack. And fans understandably went into meltdown over the mum-of-six’s post. ‘Madonna ain’t giving zero fucks,’ one commented. ‘Soup of the Day....A Glass of Rosé. Cheers my Queen,’ another replied. While a third said: ‘Why not? Midnight, midday snack….bring it on lol.’

Madonna was at member's bar, Annabel's in London last night, to celebrate the launch of the Moschino X H&M collection. She was spotted wearing the £119 gold-chain print hoodie from the collection. 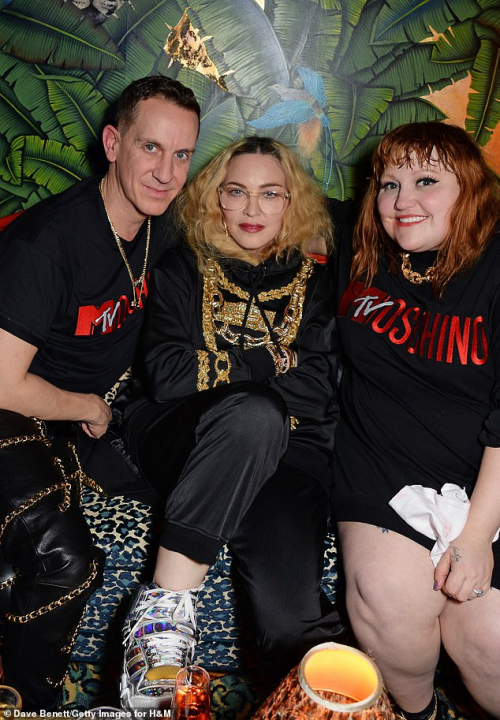 Looking for ideas for Christmas presents? Then what about this new Madonna 256-page book by by music journalist Caroline Sullivan?

Madonna is the top-selling female recording artist of all time, and a fearless, boundary-pushing artist who constantly reinvents herself and her music. Updated to include Rebel Heart, this authoritative illustrated book examines all 13 of Madonna’s studio albums in fine detail, placing each in context and charting the trendsetting musician's influence on fashion and popular culture. Covering every hit record and era-defining image, and featuring a wealth of rare and iconic photographs, Madonna takes a unique look at the legendary star's extraordinary output. 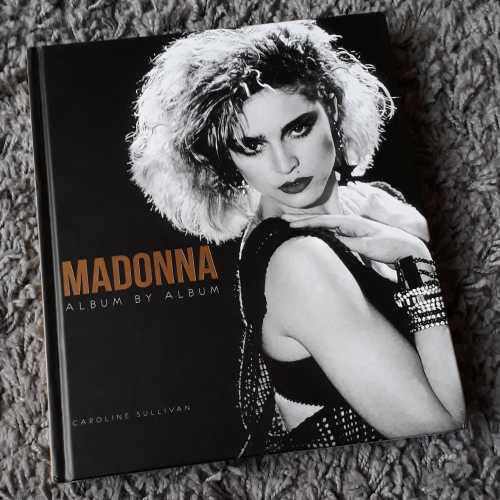 Posty’s Dimitri Clog sold out in a matter of hours on Thursday and even fashion icon Madonna wanted a pair. The Vogue hitmaker seemed absolutely gutted that she’d missed out on the footwear collaboration as Posty announced that pairs had flown off the shelves in just a day. ‘My first collab with @crocs is SOLD OUT already!’ Post Malone announced on Instagram, sharing a picture of himself not only sporting said clogs, but breaking a cardinal style sin by wearing them with socks.

Madonna instantly slid into the comments section, writing: ‘Omg I love those. How can I get some?’ After while the rest of us schmucks will have to wait until December for more stock, queen Madonna will obviously not going to be kept waiting. ‘QUEEN, hi. DM us,’ came a reply from the official Crocs account, hinting that a pair will be in the post (Malone) before the weekend is up. 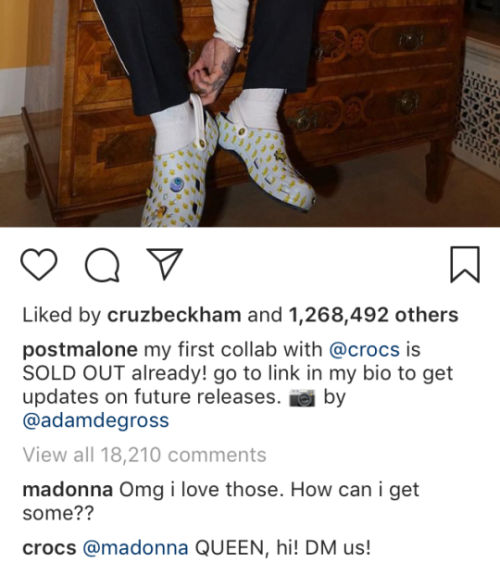 The (clearly) highly desirable, limited edition shoes - trademarked Posty Co. - feature a yellow devil face design. Modelled on the distinctive Crocs slip-on style, the clog also features ventilation ports on the toes for breathability, or a sneak preview of your socks, if you’re so inclined. Announcing the collaboration, Posty declared his love for the kind of comfy footwear that’s acceptable for any occasion.

Everything We Learned from Ariana Grande’s Interview with the BBC: 'I Can Text Madonna!'

Arianators, pull up a chair. If you aren’t lucky enough to secure tickets to Ariana Grande’s recently announced Sweetener tour, then the BBC has the next best thing: a world-exclusive of Grande performing her new material.

Recorded in front of a studio audience on Sept. 7, the hour-long special sees Grande, 25, perform with her band, a choir and all-female orchestra while also talking to BBC host Davina McCall about her music, life and career.

She can text Madonna whenever she likes
'God is a Woman' is intended to empower girls and women, and Grande wanted to involve Madonna for paving the way. It proved to be the simplest of tasks. 'I texted her, which so cool. I can text Madonna!' says Grande excitedly. 'Within a couple of minutes she replied. She was like ‘Send me everything!'

To read the rest of the article visit: uk.news.yahoo.com

Madonna attended a Halloween dinner yesterday at Soho House in London - more pictures can be viewed at: www.dailymail.co.uk/tvshowbiz 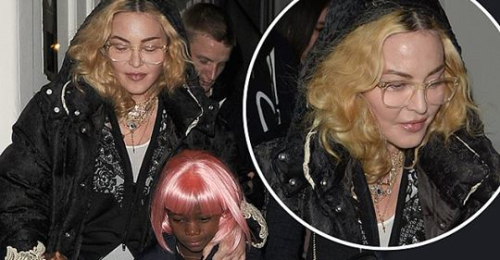 Madonna pledges up to $100,000 for Detroit Prep charter school

In 2014, Madonna made international headlines by turning her attention back to Detroit and the roots she once left behind as she headed off for fame.

Four years later, the Michigan-born pop superstar still seems committed to the cause: Madonna is announcing a $100,000 matching-grant challenge for the Detroit Prep charter school as it seeks to move into an abandoned public school building on the city's east side. The progressive elementary school is now housed in a church basement in Indian Village and is quickly outgrowing the space.

Madonna is asking fans and others to contribute to the campaign, and she'll match their collective donations up to $100,000 through her Ray of Light Foundation.

'Detroit has such a special place in my heart,' Madonna wrote in a statement. 'Kids in Detroit deserve access to great schools and I am happy to do my part to give them one!'

Detroit Prep, founded in 2016, is a sister school of Detroit Achievement Academy (DAA), one of the organizations Madonna visited and chose to financially support during a philanthropic tour of the city in summer 2014. At the time, Madonna funded art supplies for the charter school, while also contributing to the Empowerment Plan and Downtown Youth Boxing Gym.

She has continued to back DAA, including funding for that school's permanent site on West Outer Drive. She also gave teachers 50 front-row tickets to her Joe Louis Arena show in 2015.

Detroit Prep serves students from kindergarten to third grade, with plans to expand to eighth grade. Like DAA, the school follows the Expeditionary Learning model, which emphasizes principles such as self-discovery, collaboration and diversity.

Detroit Prep, co-founded by DAA's Kyle Smitley, purchased the abandoned Joyce Elementary School this summer. It has launched a $2 million capital campaign to rehabilitate the three-story, 44,000-square-foot facility, which has sat unused for about a decade.

'The idea of transforming an old, abandoned building in Detroit and making it the home of an excellent school is so exciting,' Madonna said. 'Detroit is a community that comes together, especially for our young people.'

During her 2014 trip to DAA, Madonna chatted with students about books and danced with kindergartners, who later described her as 'Michael Jackson's friend' after seeing a picture of the stars together.

'It was one of the most memorable tours I've ever given, and that had little to do with the fact that it was Madonna,' said Smitley. 'She was just extraordinary and kind and fun with our students in a way we don't often see.'

Smitley said she was particularly impressed by Madonna's continued interest in the school, including the donated concert tickets more than a year later.

'She could have easily given the money then forgotten we existed,' Smitley said. 'It showed how generous she is. She's excited when she sees people who work hard to improve the city.'

Raised in Rochester Hills, Madonna dropped out of the University of Michigan in 1978 and headed to New York as an aspiring professional dancer. Within seven years she was one of the globe's biggest pop stars.

Her daughter, Lourdes Leon, enrolled at U-M's theater school in 2014.

'Many people doubt that Detroit can come back and think that the challenges are too overwhelming to overcome,' Madonna said in a statement to the Free Press after her 2014 visit. 'But what I witnessed is the true story of Detroit - a city of innovation, commitment, perseverance, imagination and opportunity.'