Madonna ‘set to headline Glastonbury 2019 for the first time’

Glastonbury might not be happening this year, as the farm needs a break from all of its festival goers. But that hasn’t stopped organisers Michael and Emily Eavis from plotting its grand return - and it sounds like the Queen of Pop might just be making an appearance. That’s right - as it stand Madonna is reportedly favourite to headline the legendary festival in 2019. Talking to The Sun’s Bizarre column and insider revealed: ‘Preparations are already well under way after they’ve taken this year off, and Michael and his ­daughter Emily Eavis want to make it better than ever.

‘They have always been massive fans of Madonna and know she would put on an unforgettable show.’ It would be the first time Madge has ever performed at the festival and could be seen throwing out some of her classic hits on the world famous Pyramid Stage. The source added that the pair wanted to get a female artists to show their ‘diversity’ after they were inundated with backlash for not putting many women on the bill last year.

They said: ‘It was really important that they had a diverse line-up for the 2019 festival after criticism of previous ones. And with this being a fallow year they want to secure a really big name to drive ticket sales.’ It’s not the first time Madonna has been wanted to headline the show, as in 2000 Michael spoke about how he wanted to bag the Like A Virgin songstress after he was impressed with Courtney Love’s band Hole in 1999. At the time he said: ‘I would like to get Madonna, I tell you that, especially with her William Orbit [Madonna’s producer] connections.

End of a long day in Lisbon

Madonna posted these two pictures after her photoshoot in Lisbon for Italian Vogue with Mert and Marcus.

Madonna has been doing a two-day fashion shoot in Lisbon for Italian Vogue with photographers Mert and Marcus.

The Madonna of Bolton

madonnalicious got an early preview edition of Matt Cain's 'The Madonna of Bolton' today and we can't wait to read it!

The book is released on 12 July and you can pre-order it now at: www.amazon.co.uk 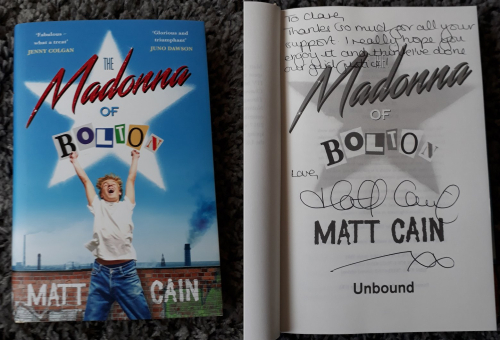 How I Met Madonna, by Seymour Stein, the Man Who Signed Her

Seymour Stein is indisputably one of the greatest A&R men in music-business history: As chief of Sire Records, which he cofounded with Richard Gottehrer in 1966, he presided over a label that for decades had not only massive hits - from Madonna, Talking Heads, Depeche Mode, Seal and others - but also acts that may not have had multiplatinum sales but shaped the sound of the last quarter of the 20th century: the Ramones, Lou Reed, the Pretenders, the Smiths, the Cure, the Replacements, Aphex Twin and so many more. A well-curated mixtape of Sire releases from the ‘80s and ‘90s is like the soundtrack to an era.

Yet Stein’s career stretches back to the 1950s: He began at Billboard and soon moved over to Syd Nathan’s King Records - home of James Brown - and several other gigs before cofounding Sire. And he’s still at it: He remains Sire’s chairman and on any given day is jetting across the globe to speak at conferences and find talent (he’s big on China and India these days), or he’s in the office, fielding calls from his mind-boggling circle of friends.

Stein (pictured below with Madonna and, far left, David Byrne) has had an astonishing life, and he’s finally penned an autobiography (with cowriter Gareth Murphy), which publishes today, called 'Siren Song: My Life in Music.' Variety is honored to present a lightly edited excerpt from the chapter where he meets Madonna for the first time. 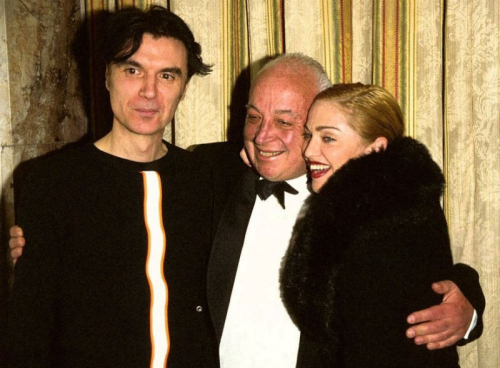 I was blowtorching the candle at both ends, and in mid-1982, I started getting pains in my chest. I thought I was getting a heart attack, so I didn’t waste any time seeing a doc. An EKG showed that the hole between the left and right ventricles was infected. My rare condition had a name: subacute endocarditis. The good news, however, was that it was fixable with open-heart surgery. I was checked straight into Lenox Hill Hospital for four weeks of penicillin to clear up the infection before they decided what to do about the deformation. And right there, feeling sorry for myself in that ass-numbing bed, was where the record man’s equivalent of Florence Nightingale walked in. Yes, you guessed it, she wasn’t really a nurse, though sometimes I do wonder if singers are types of faith healers.

The series of events that brought Madonna to my hospital bed began months earlier when Mark Kamins started dropping hints. Danceteria was still the number-one downtown club, and Mark was arguably New York’s hottest deejay. Unfortunately, he wasn’t making enough money and knew he had to broaden his professional horizons while he was in such demand. We’d asked him to remix a David Byrne solo track called 'Big Business,' but Mark was dreaming of becoming a real-deal producer and asked me for help. I told him flat out that no big artist would ever risk working with an unproven producer, even if he was New York’s hippest deejay. Like everyone else, he’d have to earn his stripes by finding nobodies and making them sound like stars.

One night in Danceteria, he had been approached by this dancing beauty who introduced herself. Madonna charmed the pants off him, literally, and played him a self-made demo of a song she wrote called 'Everybody,' which she’d made with a guy called Steve Bray. Mark then reworked and revamped the whole tune from scratch in a better studio with better musicians. He even had the sense to test his mix on the dance floor before shopping it around. The crowd seemed to respond enthusiastically, so he made copies and went hustling.

I couldn’t believe that I hadn’t been played this demo yet, so I arranged for my secretary to send the cassette into Lenox Hill Hospital, where I duly slotted it into my Sony Walkman. As penicillin dripped into my heart, I lay there and listened to Mark’s first find. I’m sure I was going nuts in that little room, but I immediately felt an excitement. I liked the hook, I liked Madonna’s voice, I liked the feel, and I liked the name Madonna. I liked it all and played it again. I never overanalyze or suck the life out of whatever I instinctively enjoy. I reached over and called up Mark. 'Can I meet you and Madonna?'

He called back saying they’d drop by the hospital that evening. 'What?'

'I know. I told her you were sick, but she really wants this.'

I just said, 'Okay, see you this evening,' and hit all the panic buttons. 'Get me a pair of pajamas,' I told my secretary. 'Oh, and send me in a hairdresser as quickly as you can.' I then pushed the buzzer for nurse assistance. 'Someone important is coming in. I need to wash. Can you unplug this drip while I have a shower?'

From Variety Via Yahoo! News

Madonna dancing with the Batukadera’s of Cabo Verde

Madonna has been dancing with the Batukadera’s of Cabo Verde along with musician Dino d’Santiago as she posted on her Instagram page.

In 1996, Antonio Banderas starred with pop icon Madonna in the musical drama Evita, in which Madonna starred in the role of Eva Péron and Banderas played Argentinian everyman Ché. While Madonna’s casting was controversial, Banderas had nothing but love reflecting back on his costar. 'She was totally into this character. It was actually great working with her,' he tells Lola Ogunnaike, host of PeopleTV’s Couch Surfing.

The actor recalls a day filming at La Casa Rosada - the residence of the Argentinian President, akin to the White House, where Madonna showed her commitment to the film: 'She got an idea with [director] Alan Parker: we have 5,000 extras in the Plaza de Mayo where she has to give a speech - 'Don’t Cry for Me, Argentina.' So she came dressed as Eva Duarte de Perón, shooting with no rehearsal, no nothing, and the extras’ reaction was extraordinary. All of the extras started crying, and the cameras were shooting, so we captured all of that. It was one of those magic moments I will never forget.'

I'll be the Bride 💍💍💍 Married to Amazement!

Ill be the Bride 💍💍💍 Married. to Amazement! 👑 #soulmate pic.twitter.com/rlteWQvYq7

Madonna has been back in the studio making new music as these posts from her Instagram account show:

Cooking Up something Yummy today!

To celebrate Pride Month Billboard magazine have republished this article about how Madonna is a constant inspiration to the LGBTQ community:

1. Those Decades of AIDS Activism

Back in the ‘80s, we were hard up for celebrities who spoke out against AIDS (and it didn’t help that we had a president who was, shall we say, reticent on the subject). But in 1989 Madonna and her Detroit-era dance instructor Christopher Flynn, who was then diagnosed with AIDS, fired up New York with a major benefit dance marathon. By that time, Madonna had already lost her good friend Martin Burgoyne to the epidemic. In footage from the event, she thrashes about with sweet abandon. That’s fun to watch, but it’s even cooler to see Flynn, who later died from the illness, open up about Madonna as a confidante who understood him.

2. The Documentary Where Madonna Is Queen, But the Gays Rule Too

The ‘91 documentary Truth or Dare is quite possibly the second most essential purchase for new Madonna fans after The Immaculate Collection. It gives you legendary performances (not just the masturbation-centric 'Like a Virgin' but also 'Oh Father,' 'Vogue,' and 'Keep It Together'), infamous cameos from the likes of Antonio Banderas, Kevin Costner, and then-beau Warren Beatty, plus scream-worthy interactions with her backup dancers, most of whom were gay. Truth or Dare is one of the first documentaries I ever saw that featured gay dudes hanging out. They go to a Pride parade, gossip about each other, and get an earful from Madonna when they’re mean to another dancer. 'Be nice to him. He doesn’t have the thick skin that you have,' she intones like the headmistress of homosexuality. Be sure to bring a hanky when she dedicates a show to her pal Keith Haring, who died just before the tour started.

To read the rest of the article visit: www.billboard.com/pride/madonna-lgbtq