This is so cool!! One day I will release the song we did together! 🎶🔥🎶🔥🎶🔥 👑👑 #epic #princeyorgoland #robertxavier pic.twitter.com/tpn0CvRq3H

Sean Penn isn’t shy about his love for the Material Girl!

The 57-year-old actor appeared on The Late Show earlier this week, and in a segment called 'Sean Penn-y For Your Thoughts,' he was asked by host Stephen Colbert to pick between Madonna, who he was married to from 1985 to 1989, and pop princess Britney Spears.

'Ah, I love my first wife very much,' Penn said of the 59-year-old singer. 'There’s no [comparison]… you don’t compare those things.'

'People compare them all the time!' Colbert noted, before asking, 'So, you’re going to go with Madonna?'

'Sure!' Penn replied with a grin.

The two-time Oscar winner went on to reveal even more fun details about himself, including that his go-to karaoke song is the 1983 hit 'It’s Raining Men' because he used to sing it on the way to the set of his 2008 film, Milk.

When asked if he’s ever been mistaken for another celebrity, he replied, 'Emilio Estevez, about 20 years ago.'

Penn and Madonna haven’t been shy about their mutual love for one another in recent years. In December 2016, they worked together at a charity event benefiting Raising Malawi, and Madonna offered to remarry her ex.

'I’m still in love with you,' she told Penn in front of the star-studded audience.

The two have remained friends since their divorce and both have remarried several times. Penn was married to actress Robin Wright from 1996 to 2010, and was engaged to actress Charlize Theron before their romance ended in 2015. Madonna was married to director Guy Ritchie from 2000 to 2008.

March For Our Lives

It is our Responsibility, our Duty and our Right to Stand Together, with every Student, every Family, Every Human!! ♥️ Every Heart! And Demand an End to Gun Violence!

It is our Responsibility, our Duty and our Right to Stand Together, with every Student, every Family, Every Human!! ♥️ Every Heart! And Demand an End to Gun Violence! #MSDStrong #MarchForOurLives #NeverAgain 🙏🏻🇺🇸 pic.twitter.com/ZB4OmsiYxr

Ciccone Youth From Across the Ocean...........🌍🌏🌎. Stand In Solidarity! In the movement to end Gun Violence. 🙏🏻🇺🇸 #MSDStrong #MarchForOurLives #NeverAgain 🙏🏻🇺🇸♥️ pic.twitter.com/nGOwVNPBCG

Everyone wears a Mask

Madonna Getting Ready in a Red Lip, Bold Liner and Hair Rollers Is as Glam as You’d Imagine

Come on, vogue! Madonna’s longtime hairstylist Andy Lecompte shared a photo of the star on Instagram on Wednesday, March 14, that confirmed what we already assumed to be true: the Material Girl is never not glam. Giving us her best vogue pose, Madge looked #flawless sporting a hair net and rollers as she got ready for the day. Needless to say, these were not your grandmothers curlers.

Rocking a bold red lip and radiant skin, the 'Like a Prayer' singer already looked ready for a night out in the pic Lecompte posted. Her striking eye makeup included super fluttery lashes, graphic liner and brushed-up brows. And while we never got a look at the finished look, Madonna makes the hair net and roller look so chic (and not all that more outrageous than some the avant-garde styles we are used to seeing her in), we wouldn’t have been surprised if she left the house just like that.

Also, if there was any doubt the 59-year-old songstress DOES. NOT. AGE. this photo puts it all to rest. Madge has long talked about being fastidious with her skincare regimen, and, as founder of MDNA SKIN, she worked with a team of Japanese experts to create masks, moisturizers and mists that utilize thermal mineral water, volcanic clay and olive oil from Italy for nourishing and anti-aging effects.

The mom of six has waxed poetic about the moisturizing and glow-inducing powers of the Rose Mist, which she admitted to liberally spritzing throughout the day. The tightly curated line of products also includes a high-tech Magnetic Flow tool that can be used like a magnet with the line’s Chrome Clay Mask to further remove impurities or with the Serum to improve penetration and effectiveness.

Basically, we’re onboard to try whatever she’s doing, and she may actually inspire us to dig out that roller set we haven’t thought to touch in years! 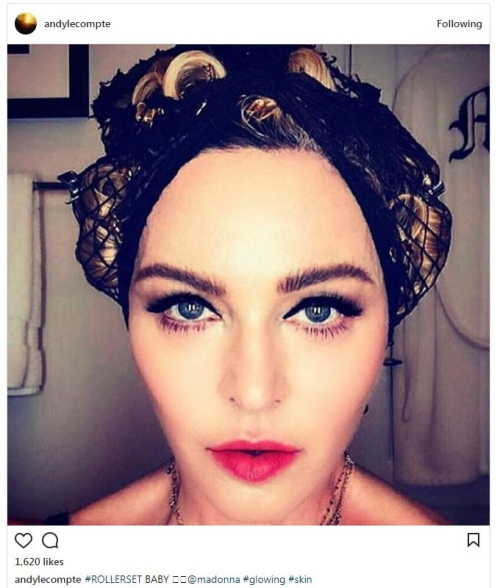 Madonna is making her comeback as a movie director

Madonna has announced that she’ll be making her directorial comeback at the helm of a new film about the life of Dutch National Ballet’s Michaela DePrince.

Taking Flight will tell the life story of the dancer who started life as a a war orphan in Sierra Leone before rising to worldwide acclaim as one of the most celebrated names in ballet. It will be an adaptation based on the memoir by Camilla Blackett.

'Michaela’s journey resonated with me deeply as both an artist and an activist who understands adversity,' said Madonna. 'We have a unique opportunity to shed light on Sierra Leone and let Michaela be the voice for all the orphaned children she grew up beside. I am honoured to bring her story to life.'

As well as acting in the likes of Evita, Dick Tracy, Swept Away, Shadows And Fog and Shanghai Surprise, Madonna’s directing credits include Filth And Wisdom, and 2011’s Wallis Simpson biopic W.E. Her work on the screen has been met with varying degrees of critical and commercial success.

As well as being among the rumours for headlining Glastonbury 2019, Madonna is also at work on her 14th album.

She has however, shot down rumours that a biopic of her own life was in the works at the hands of others.

'Nobody knows what I know and what I have seen,' she wrote on Twitter. 'Only I can tell my story. Anyone else who tries is a charlatan and a fool. Looking for instant gratification without doing the work. This is a disease in our society.'

So excited to be able to bring the story of this rare and talented soul to the world! 💃🏿💃🏿💃🏿. Michaela’s journey resonates with me deeply as both an artist and an activist who understands adversity. We have a unique opportunity to shed... https://t.co/M056G4w58M pic.twitter.com/vQ4ONTNGdQ

I have not forgotten what GOD put me on this 🌏 for....#music

Exclusive! @Madonna on her epic Oscar parties, and the secret to her success: https://t.co/EzV4LjY6BL pic.twitter.com/XuawLuM5xr

Tonight on #ExtraTV: Icon alert! We’re hanging with the one and only @Madonna, dishing on her epic #Oscars party & MDNA Skin! pic.twitter.com/HLmgAqlQC1

Kim Kardashian Recalls Spying on Madonna as a Kid

Kim Kardashian was once next door neighbors with Madonna.

The Keeping Up With the Kardashians star shared a childhood memory with the singer at the MDNA x KKW Beauty event on Tuesday in Los Angeles.

During their conversation with Kandee Johnson, Kim revealed that while growing up in L.A. she lived next door to Madonna's manager.

'She, at a time period in her life, moved in with her manager who happened to be our next door neighbor growing up,' Kim said (via People). The KKW Beauty founder went on to share that she and sister Kourtney Kardashian would walk her next door neighbor's dog and when they went over to the house, they would see Madonna.

'We were shaking,' Kim recalled.

In addition to receiving some jewelry from Madonna, Kim and her BFF also got to watch Madonna film her music video 'Cherish' in 1989.

'My best friend Allison Azoff and I were at her parent's beach house and we went outside hearing music and saw you on the beach filming,' Kim shared with Madonna. 'We sat there all day and watched you and the team let us and we sat there on the little stairs and we were mesmerized and we just talk about it all the time.'

Kim, who would've been around nine at the time, called the experience the 'best memory ever.'

While at the event on Tuesday, Madonna shared a selfie with Kim on Instagram. 'Thank you @kimkardashian and all the folks @mdnaskin,' she captioned the post.

This comes just days after Kim and Madonna were spotted hanging out at the singer's 2018 Oscars after-party, where the duo posed for a photo with Cardi B. 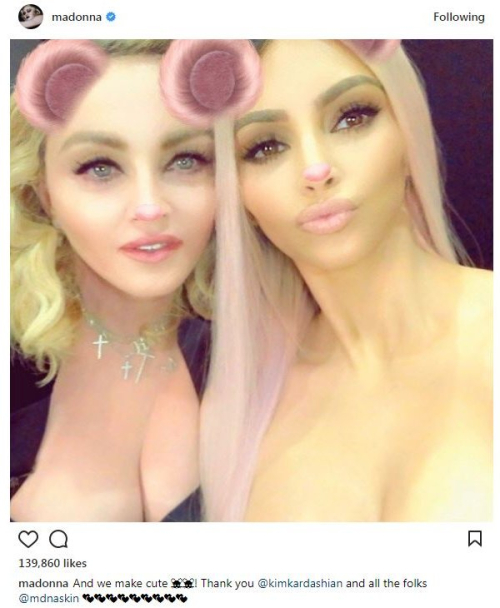 The next minute i was having a serious chat about skin care and beauty with @KimKardashian 💕🌈🎉!🌈💕🎉🌈💕🎉! Fun Day #mdnaskin 🌹 #beauty #skincare. #epic @mdnaskin pic.twitter.com/Q3CbTCzQrP

Madonna shared a selection of pictures from her 2018 Oscars afterparty photobooth:

Inside Madonna’s Oscars 2018 Afterparty With Kim Kardashian, Cardi B and More

Her Madgesty knows how to party! Madonna hosted a star-studded 2018 Oscars afterparty on Sunday, March 4, that drew in some of the biggest names in film, TV and music.

Kim Kardashian, Cardi B, Jennifer Lawrence, Margot Robbie, Timothée Chalamet were among the many stars who showed up to celebrate with the Queen of Pop, 59. 'Madonna was an amazing host,' a source tells Us Weekly exclusively. 'She worked the room all night and chatted with all the guests.'

'Madonna was dancing up a storm all night!' the source tells Us. 'She and Margot Robbie were on the floor at one point. She spent a lot of time with Kim and Cardi B. Madonna and Cardi B are talking about a collaboration on Madonna’s upcoming album.'

A second source adds, 'Cardi B performed ‘Bodak Yellow’ at the party. Madonna was in a great mood, bouncing around.'

Chalamet, 22, 'kept to himself' throughout much of the bash, according to the first source. The Call Me by Your Name actor, who was nominated for best actor at the Oscars, dated Madonna’s daughter Lourdes Leon in 2013 while they were students at Fiorello H. LaGuardia High School of Music & Art and Performing Arts in New York City. It is unclear if Leon, 21, attended her mom’s party.

The 'Vogue' singer’s longtime manager Guy Oseary shared an epic picture on Instagram of Madonna, Kardashian, 37, and Cardi B, 25, posing in what appears to be a photo booth at the fête.