As i look back on this year 🎉🌈🎉🌈. I wanted to take A moment to give Thanks to All my Friends and Family. Everywhere!! 🌎🌍🌏. Life would be empty and meaningless without each and every one of you. I am Truly Blessed!! ♥️💃🏿♥️💃🏿 So Bring It 2018! Give Me All you Got! pic.twitter.com/iqBX66HCeP

Madonna: 'Feeling some type of way'

Happy Holidays From the Ciccone Youth. Love and Gratitude ♥️♥️♥️ to Everyone we ever Have Loved, and will continue To Love!! ☃️☃️☃️🌲🌲🌲🌎🌍🌏🙏🏻 #family #together #happiness #blessed #life #love ♥️ pic.twitter.com/EKCKWReONA

Loved This Mans Show!! 👏🏻👏🏻👏🏻👏🏻👏🏻 COMFORT IS POISON!! 🎭🏆 🎭. Not Sure how many people appreciate the profundity of.this statement @chrisrock 💙 pic.twitter.com/758fepom5Y

The Perfect 24-Hour Spa Day Involves This, According to Madonna

'You have M from MDNASkin.com,' is how Madonna answers the phone while doing press for her new skin-care line out of Japan, MDNA, named after her 12th studio album, which was named after the pop icon herself.

Cutting right to the chase - you’d expect nothing less from a music legend and cultural symbol who has made a career out of self-empowerment - she delves right into the eight-product line that now includes a light, water-based finishing cream that is packed with hydrating ceramides and derived from the shimmering mineral mica.

It is the culmination of a life spent on the road, she says, where much activity and little sleep is had. After all, good products, sleep, and water are the answer to perfect skin: 'Juice is not water! Water is water!' says the 59-year-old, her enthusiasm making way for her Midwestern accent.

The sun-conscious, Michigan-born mogul, who now has six children, the eldest of which is Lourdes Leon, 21 - 'I have dreams of her laying out by the pool without wearing any sunscreen and I go ballistic,' she says - prides herself on having always taken care of her skin, even when she was a broke artist just starting out on Manhattan’s Lower East Side.

'When I was making the transition from dance to music, I would save the little money I had and get a facial on Seventh Street, sandwiched in between all of the punk stores, once every couple of weeks,' she says. 'I don’t know why we took care of our skin, but we did.'

The 'we' she is referring to is her and best friend Debi Mazar, the actress who moonlighted as her makeup artist at the time, not she and then-boyfriend Jean-Michel Basquiat or good friend Keith Haring. No, she says with a laugh, 'the boys did not take care of their skin. But they were artists and painters and everything was about visuals.'

To read the rest of the article visit: www.vogue.com/article/madonna-mdna-skin-care-line

On Friday (Dec. 8), Madonna stopped by Live With Kelly & Ryan for a casual interview about her kids, performing and everything in between. The singer joined the two hosts for a game of 'Sketching With the Stars' and brought out her pal (and 'silver fox') Anderson Cooper to be her partner.

In a scene now cut from the YouTube video, Cooper delays the game by asking the singer when she'd be heading back out on tour, to which she replied: ''Soon. I gotta get my show together. 2017 was soccer mom in Portugal. 2018....I’m coming back, baby. I’m coming for you!'

US TV: Madonna On 'Live With Kelly And Ryan' Today

On Friday, December 8, 2017, Madonna will sit down with one of our favorite fan girls Kelly Ripa and Ryan Seacrest for an exclusive interview on ABC's 'Live with Kelly and Ryan'. The Queen of Pop will discuss her career, philanthropic activities, as well as her current projects, including her brand new MDNA Skin care line, which was recently launched in the U.S.

The last time Madonna 'officially' met with Ripa was back on January 11, 2007 on 'Live', but the two of them made the headlines twice over the past years, Ripa attending Madonna’s 2012 Sticky & Sweet Tour and 2015 'Rebel Heart Tour', the Material Girl handing her microphone for Ripa to sing along from the front row!

Will Kelly and Ryan get the MDNA Skin Chrome Clay mask treatment from Madonna herself? Find out by watching the show next Friday and get ready for more fun!

Life....you can close your eyes or you can stick your tongue out at it!

Stunned passengers were left open-mouthed as they watched Madonna get off an economy flight - loaded with her Louis Vuitton luggage - after their plane was diverted on its way to Lisbon.

The music legend, worth around £600 million, was flying from Heathrow with Air Portugal earlier this week when the crew told passengers that the plane had to refuel in Porto instead.

The American, 59, looked tired as she wore a long, black and white multi-checked coat, a monochrome striped scarf and hid her make-up free face under a grey fedora hat, reports Daily Mail.

She had been hiding completely unrecognised in the cheap seats - which cost from just £42 instead of £180 for business class tickets - until the flight landed in Porto and her agent whisked her through business class to the front of the plane.

An onlooker said: 'We'd been on the ground for about 20 minutes when I saw her assistant speaking with crew members at the front of the plane. Then I noticed all this Louis Vuitton luggage being carried past me down the aisle too. And Madonna literally walked by me. I couldn't believe it. She had no make-up on but I Googled her and I discovered that she's recently bought a place in Lisbon, so her being on the flight suddenly made sense.'

'I thought to myself 'Madonna is on my flight!' 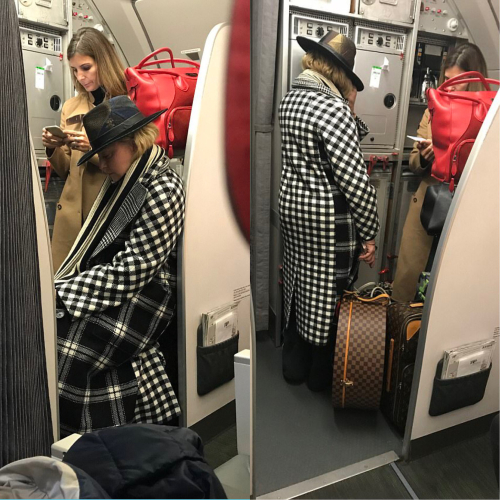 'She looked tired as she sat and waited at the front of the plane for about half an hour. I could barely see her face, she was constantly turning away or hiding her face in her scarf. She didn't say or do anything while her agent was on her phone. Madonna was just sitting and waiting. Then she got off the plane and I saw her get on to an airport bus. I'd heard her agent saying that her car was waiting out front - they must have meant outside the airport.'

The assistant appeared to have told the crew she was Madonna but they remained professional and didn't react. No one else appeared to recognise the Holiday superstar in their midst.

The lunchtime flight sat on the Porto runway for about an hour before flying on to Lisbon.

The source continued: 'Then a lady asked why two women had left the flight at Porto. A female crew member whispered to her that it was Madonna. She was gobsmacked!'

When MailOnline spoke to Madonna's publicist Barbara Charone about this story, she refused to comment.

A spokesman for TAP said heavy rain in Lisbon meant there was bad air traffic over Lisbon.

The pilot was told that they would be in a holding queue for half an hour when they got there so they decided to touch down, he said.

The spokesman added that while TAP always carried sufficient fuel they decided that the better course of action was for the plane to land in Porto.

'TAP confirms Flight TP359 from November the 28, from Heathrow to Lisbon, diverted to Porto (distance between the 2 cities around 300 km) due to bad weather in Lisbon.'

In 1991 i took out a full page ad and published this letter. In Billboard magazine. So many lives have been lost since then!!! (And before!) we need to continue to make people aware of this disease, to do what we can to facilitate research and above all... https://t.co/bvWSoJJBVt pic.twitter.com/9Qjds42EjY

In honor of World AIDS Day!! Im posting this photo of me with 2 of my dearest friends who died of AIDS. Kieth Haring and Martin Burgoyne. I Loved them both dearly! ♥️ We can never forget the lives lost by this disease!! And that there is still no cure... https://t.co/OhkRYXiR98 pic.twitter.com/OFdTzwJbr9