A Song For ThanksGiving!

Living in Louis Vuitton (and nothing else)

Fit For A Queen!! 👑 The New MDNASkin Finishing Creme!

My latest enamel pin design is based on the Desperately Seeking Susan pool scene, and it’s the finalist to be produced as a limited-edition run via pin giant, Pin Lord. I submitted the design because I wanted to introduce 80s Madonna to their 100k following (it’s a young-ish following), I didn’t realistically think the design would be shortlisted.

If you like it, and would be kind enough to help me out, all you and your followers need to do is write @windowblues (that’s my Insta) on the Instagram post stated below. That’s it! I would be forever grateful. 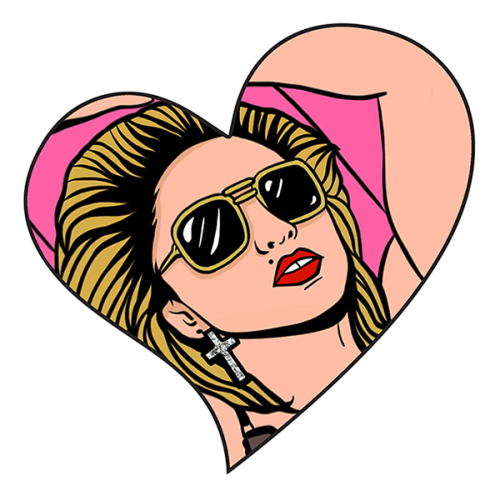 It has been announced that Liz Smith, legendary gossip columnist and long-time Madonna supporter has died. We at madonnalicious always loved her columns and insights on Madonna and will miss them and her.

Former New York Post gossip columnist Liz Smith, who won her own A-list status with her witty chronicling of the glitterati, died of natural causes on Sunday, said her literary agent, Joni Evans. She was 94.

An affable blonde known for pealing laughter, Smith wrote a column that celebrated her famous friends, from Tom Hanks to Liza Minnelli to Madonna, and was read around the world for more than a quarter-century.

Despite her towering reputation, Smith held a lighthearted opinion of herself.

'We mustn’t take ourselves too seriously in this world of gossip,' she said in 1987. 'When you look at it realistically, what I do is pretty insignificant. Still, I’m having a lot of fun.'

Born in Fort Worth, Texas, in 1923, Smith graduated from the University of Texas in 1949 with a degree in journalism and, a year later, moved to the Big Apple.

Smith ultimately wrote for nine New York newspapers and dozens of magazines, but it was a stint writing for Cosmopolitan that led to her big break.

While establishing herself as an authority on Elizabeth Taylor and Richard Burton, Smith attracted the attention of the New York Daily News. She started her own column at the tabloid in 1976 - and a gossip star was born.

By the 1990s, she began a syndicated daily column that ran in Newsday and the New York Post.

The column, which was reprinted across the country and abroad, reportedly earned her more than $1 million a year.

Her scoops included Donald Trump’s 1990 split from first wife Ivana. Later, in The Post, she supported her celebrity friends, including backing Billy Bob Thornton after word got out that he and Angelina Jolie had gotten married and exchanged necklaces adorned with vials of each other’s blood.

Smith’s 2000 memoir, 'Natural Blonde,' in which she admitted she was bisexual despite having married two men, was a best-seller.

In an interview with the New York Times this past July, Smith revealed that she was having trouble moving after suffering a minor stroke.

'I can’t walk. I can’t talk as well as I used to, but I’m relatively healthy otherwise,' she explained.

'But everybody gives up something to be able to do a job, a demanding job,' she added. 'And being a reporter is a demanding, dangerous job. It may be glamorous or put you in harm’s way. I gave up being considered ethical and acceptable, for a while.'

Madonna‘s children get the best lullabies at bed time, if the singer’s latest video is any indication.

The Grammy winner, 59, shared a cover of Elliott Smith‘s 'Between the Bars' on her Twitter page, where she’s softly singing and playing guitar during a late-night music session.

'Strumming my favorite song when everyone else is asleep,' she captioned the black and white video posted early Thursday, adding the hashtags #prayer #lullaby and #love.

This isn’t the first time Madonna has expressed her love for the track off Smith’s 1997 album Either/Or. In a 2006 interview with Q magazine, she named 'Between the Bars' as the song from the last 20 years she wished she’d written.

She also covered the tune at a 2013 screening of the short film #SecretProjectRevolution. The singer was dragged into the room by men dressed as prison guards. Halfway through the performance, she was accompanied by a masked dancer dressed head-to-toe in black—who just happened to be her son Rocco.

Between the Bars............🎼🖤strumming my favorite song when everyone else is asleep. ♥️ Eliot Smith 🙏🏻 #prayer #lullaby #love pic.twitter.com/i0JvwvMaPA

She may be the Queen of Pop, but Madonna opted to shun first class travel in favour of economy on a recent flight to Portugal.

The 59-year-old shocked passengers after she jetted out of the capital to Lisbon on Halloween.

The Material Girl singer was pictured using her phone in a window seat on the Air Portugal flight in what appeared to be economy class.

Despite denying herself first class travel she did allow herself the luxury of extra leg room.

Fans struggled to believe their eyes with one tweeting: 'Can you imagine boarding a plane and then sitting next to the f****** QUEEN?! I JUST CAN'T. @Madonna.'

Another posted: 'If I got on a plane and MADONNA was sitting next to me in coach I would LOSE MY MIND.'

A third was shocked that she doesn’t own her own plane, writing: 'Wtf madonna doesnt have her own plane? Xd.'

Madonna was reportedly in London to visit her son Rocco Ritchie, who she has with ex-husband Guy Ritchie, before boarding the flight to Portugal to visit her second son David Banda.

The 12-year-old, who Madonna adopted from Malawi in 2006, recently signed to the Benfica football team youth academy.

Madonna is said to be splitting her time between the UK, US and Portugal and recently bought the 18th century ‘palacete’ Quinta do Relógio in the hilltop town of Sintra in Lisbon. 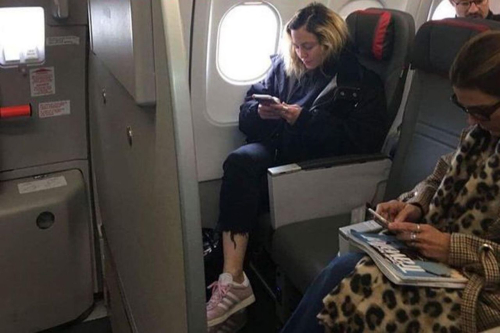