Madonna shared this wonderful sleeping picture of her and the kids (and an awake Gypsy) on her Instagram page: 'Gypsy will you please go to sleep! 🐶 💘' 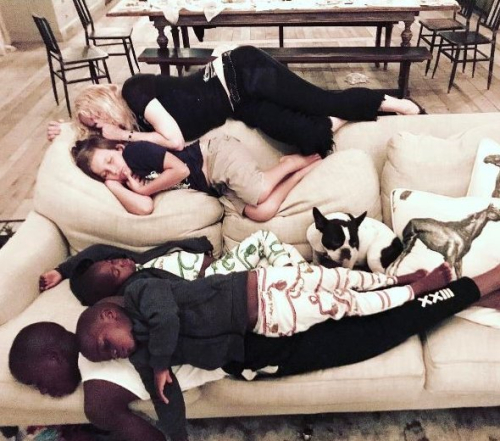 Don't Be A Chicken!

Orange is the New Black!

Orange is the. New Black! 🖤 pic.twitter.com/XujB8plyyG

A home once lived in by a young Madonna that later was remodeled following arson was put on the market Thursday for nearly five times its previous sale price.

The two-story 2,700-square-foot colonial features five bedrooms, two bathrooms and a total of 14 rooms, according to the RE/MAX listing, which states it was built in 1969 and last remodeled in 2017.

The listing was not shy about touting the home’s claim to fame.

As Madonna Ciccone, the music icon spent some of her younger years as one of six siblings living in the house.

Associate broker Robert Kabbani said the current owners bought the home in 2012 for $91,000 and had to remodel the residence because of a 2008 fire that was attributed to arson.

After the blaze, the home was boarded up after extensive smoke and fire damage throughout the home. Authorities believed the fire started in the living room. Kabbani said he wasn’t sure how long Madonna lived in the home, but her parents owned the house until 2001. He said one man bought it off eBay and then sold it to another person who owned it until about 2008.

Erika Juhl, 60, and her husband Daniel Juhl, 58, currently own the house. Erika Juhl said she had no idea Madonna once lived there when she first looked at it.

'1.22 acres in the heart of Rochester Hills was very appealing to me, and I love to garden, and so the damage on the house didn’t deter us,' Juhl said. 'It was more the land we were interested in.'

During the closing process, her brother-in-law mentioned that Madonna grew up in the area, so Juhl did what anyone would do. She Googled to find out where.

'I went online and typed in ‘Madonna’s childhood home,’ and lo and behold, there’s the picture of the house we just made the offer on,' Juhl said, laughing.

The Oakland County house is located on a cul-de-sac at 2036 Oklahoma, north of Walton Boulevard and east of Texas Avenue in the subdivision Hitchman’s Haven Estates.

According to the description, the home has hardwood floors, vaulted ceilings, a 'dazzling kitchen' with custom oak cabinets, oak countertops and a porcelain farmhouse sink. An open family room leads to a screened in porch and covered patio.

For the rest of the story and more pictures visit: www.detroitnews.com 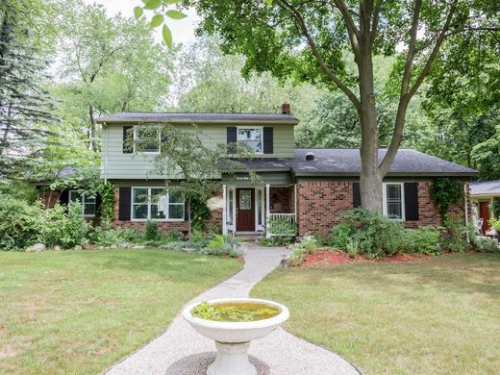 Madonna has announced that her record-breaking MADONNA: REBEL HEART TOUR will be released by Eagle Vision on September 15 on digital download, DVD and Blu-ray complete with bonus content, and an audio CD of highlights from her much-heralded tour.

The Material Girl will also release a live album featuring 22 songs from the Rebel Heart Tour, available on double CD and digital download.

The MADONNA: REBEL HEART TOUR film was recorded around the world and features both live and behind the scenes material, as well as previously unreleased footage culminating with performances at the Qudos Bank Arena in Sydney, Australia in March of 2016. MADONNA: REBEL HEART TOUR is co-directed by Danny Tull and Nathan Rissman, both of whom have worked extensively with Madonna on her feature films and tour movies. A version of the film previously debuted on Showtime in December 2016.

The tracklist for MADONNA: REBEL HEART TOUR film and live concert album span all decades of the iconic superstar's illustrious career, including songs from her chart-topping Rebel Heart album to classic fan favorites. Of particular note to longtime fans will be the new interpretations of some of Madonna’s timeless hits. 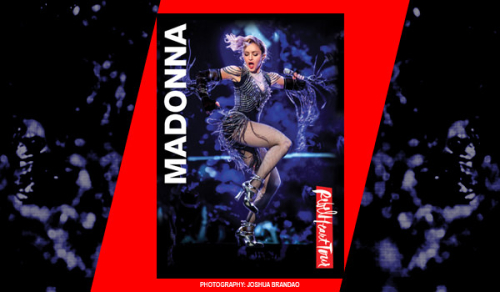 Light up your weekend!

Light up your weekend with my new favorite toy! 🔥🎭😂 An LED face mask for skin care and relaxation! 🙌🏻💯🎉♥️ pic.twitter.com/WrBC1qPiRA

Amazon Founder Jeff Bezos has tweeted asking for advice on his philanthropy. At the time of writing he’s had more than 8,000 retweets and 30,000 replies. Madonna was one person who tweeted a reply:

A woman's work is never done!

A Woman's work is never done!! 6 kids and many jobs =ratchet hair 😳😂🤡🎥🎬🎭Prepping my film not just whistling dixie! 😝 pic.twitter.com/TuD9SMBUMa

All We Need is Love!

All We Need is Love ♥️😍🙏🏻 pic.twitter.com/56MHaDqLmw

1. Those Decades of AIDS Activism
Back in the ‘80s, we were hard up for celebrities who spoke out against AIDS (and it didn’t help that we had a president who was, shall we say, reticent on the subject). But in 1989 Madonna and her Detroit-era dance instructor Christopher Flynn, who was then diagnosed with AIDS, fired up New York with a major benefit dance marathon. By that time, Madonna had already lost her good friend Martin Burgoyne to the epidemic. In footage from the event, she thrashes about with sweet abandon. That’s fun to watch, but it’s even cooler to see Flynn, who later died from the illness, open up about Madonna as a confidante who understood him.

For the rest of the reasons visit: billboard.com/madonna-lgbtq-inspiration

'Congratulation to my brave and beautiful friend Ariana for organizing the benefit concert in Manchester! Last night. Gathering so many great artists and bringing everyone together in the spirit of ❤️ and Peace and not bowing down to F.E.A.R. Im so Proud of you! 💘💕and I would like to make a donation along with my manager Guy Oseary and encourage others to do the same!! 😂🎉💯♥️We ♥️Manchester http://www.welovemcrcharity.org/

Congratulation to my brave and beautiful friend Ariana 🏅 for organizing the benefit concert in Manchester! Last...https://t.co/MxB4w75oQt pic.twitter.com/P7kGuudOJ8

A Glowing Weekend with Madonna

This week sucked all the moisture out of me!! So Friday is MDNA Chrome Clay Mask Day! 🤡😂💯 Need my skin to Glow this weekend! 💕💕💕💘💕💕 pic.twitter.com/2uZo4di9kF