Madonna and family head back to the US

Join your friends for an all madonna dance Party with Dj JENE , while you experience magical views of NYC's skyline. 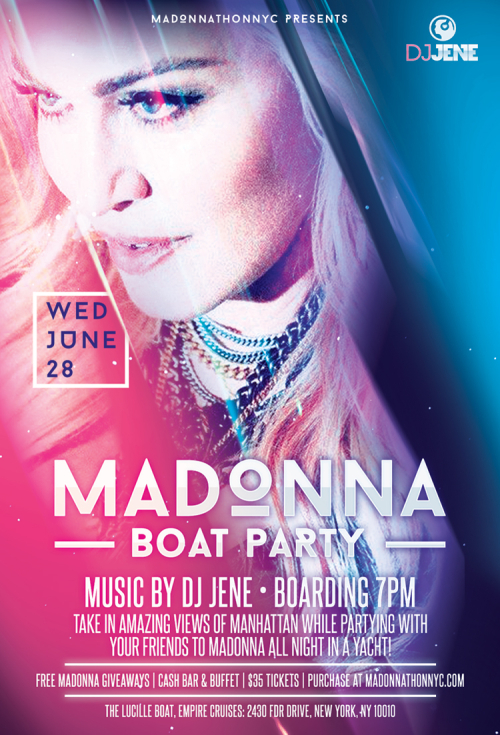 Madonna attended Noel Gallagher's birthday party last night and shared this picture of her with Bono and Stella McCartney.

Zac Efron has the wildest story about Madonna

It’s a pairing that we’d NEVER have thought could happen, but Zac Efron has the wildest Madonna story, and we can’t quite believe it.

Efron made a pitstop from the promo tour of his new movie Baywatch to chat to Jimmy Kimmel on his late night chat show, where he was quizzed about what happened when he was sat next to the pop music icon during a U.F.C. fight at Madison Square Garden last November.

From snaps of the night, it seemed that the pair were getting on famously, and Kimmel was keen to figure out what the former High School Musical star and the Queen of Pop had been up to.... 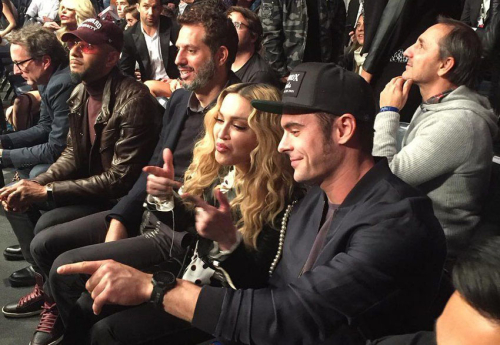 Firstly, Efron was quizzed at how the pair actually even ended up sitting together.

'In the coolest way possible, I showed up at this fight. It was totally last minute,' Efron said. 'The seats are all named when you get to the center of the ring, and I was ring side, so I was very close to this fight. I kept getting closer, and I knew I was in the front row. I saw several ‘famous’ people, and then Madonna and Zac Efron. Then it just ended. I was like, ‘I’m next to Madonna for this entire fight?’ It was awesome.'

The actor went on to say that he chatted to pop legend, and that they hung out. In fact, Madonna was allegedly pretty into the fight, with Efron saying that 'she was having the time of her life out there.'

Of course, this being Jimmy Kimmel, things didn’t say above board for long, with the chatshow host quizzing Efron as to whether it was possible that Madonna was actually coming on to him.

'Is it possible that Madonna maybe switched the sign so that maybe you would be seated next together?' Kimmel asked. 'Madonna is an irresistible person. When she sets her sights on someone, there’s no escaping.'

Going visibly red, Efron was rather coy about his answers....

Indeed, Efron even joked that he and Madonna got a bit handsy with each other thanks to the excitement with the fight. In fact, Kimmel even shared some video footage of the singer tapping the actor.

When asked point blank whether something had happened between Madonna and himself, the actor gave an embarrassed laugh, before jokingly referring to the previous clip. 'I guess you could say she tapped that,' he said.

From Hello Giggles Via Yahoo! News 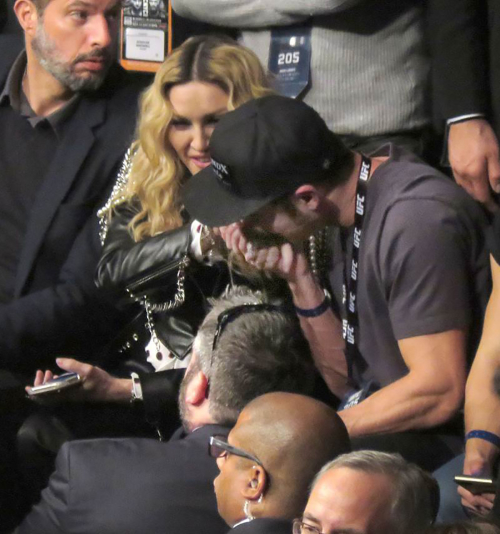 Lisbon I had so much Fun!

Glorioso! 🌝 Lisbon I had so much Fun! I cant wait to come back one day and unlock all of your secrets. 🔑🗝🌈💘😂 pic.twitter.com/JwIFCtdzPl

1985 was the year a rising pop star named Madonna went supernova thanks to her starring role in the hit comedy Desperately Seeking Susan and her first blockbuster North American concert tour. But the singer didn’t look like the next big music sensation when she turned up on the set of the high school wrestling movie Vision Quest - which was released in February 1985, two months before Susan and the Virgin Tour - to film a small role as a nightclub singer serenading the movie’s stars, Matthew Modine and Linda Fiorentino.

'She looked like Boy George,' Modine tells Yahoo Movies. 'The producers were saying this girl was going to be such a big star, but I remember people not really being impressed.' Even her songs left listeners cold. First, she performed the largely forgotten 'Gambler,' followed by 'Crazy for You,' which has since become a staple of proms around the world, but slightly underwhelmed listeners at the time. 'We thought, ‘Oh, that’s a sweet song,‘' Modine says of hearing that slow dance anthem for the first time.

Within a year, though, the actor discovered just how big a star Madonna had become. While visiting Rome to discuss a potential film role, Modine saw a giant poster of the singer’s face, with 'Crazy for You' printed in Italian. 'I thought, ‘Oh, she must be doing a concert here.’ But then I looked at the poster a little bit closer and at the bottom I saw myself [in a scene from the film] with my arms in the air. The movie had gone from being a Matthew Modine movie that Madonna was in to a Madonna movie that Matthew Modine was in! That’s how fate would have it.'

Thirty-two years later, Vision Quest‘s Madonna-scored montages are among the highlights of a teen sports movie that’s clearly made in the image of The Karate Kid - a box-office sensation the year prior - but has its own unique moves. Available for the first time on Blu-ray, Vision Quest is notable for how it avoids giving the underdog hero, Lowden Swain (Modine), a Cobra Kai-style nemesis to defeat on the wrestling mat. Instead, his final opponent, Brian Shute (Frank Jasper), is presented as a decent guy who is on his own 'vision quest' - a self-imposed rite of passage that leads teenagers into adulthood. In Lowden’s case, that quest involves dropping 22 pounds to wrestle Brian, who is in a lower weight class.

Madonna and her family are currently enjoying a holiday in Portugal, and Madonna has been sharing pictures on Instagram page:

Members of the Television Academy in the USA have just received showreel DVDs for consideration for Emmy nominations. The Rebel Heart Tour is in the 'Outstanding Special Class Program' category. 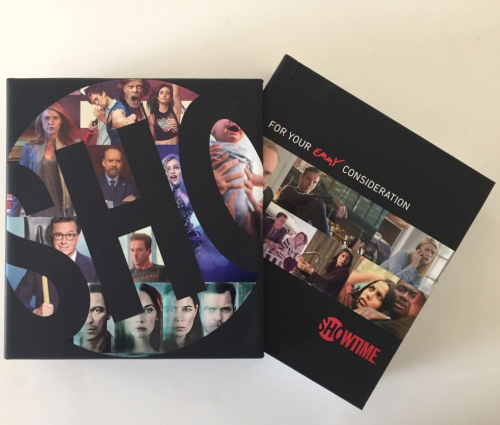 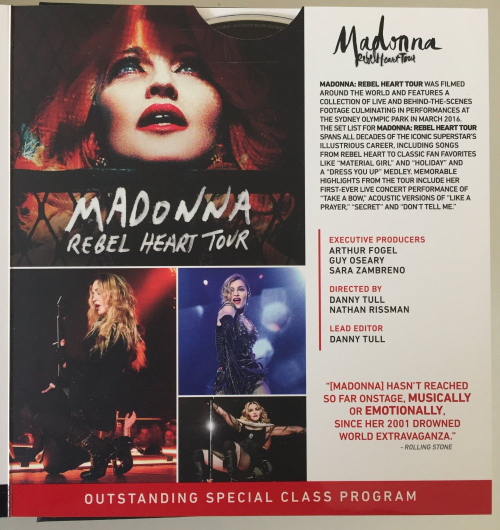 Madonna announced her new concert film, Rebel Heart Tour, will be released September 15th. The live film originally premiered on Showtime in December 2016 and was taped during Madonna's Sydney, Australia concerts in March 2016.

The film includes bonus content such as live and behind-the-scenes unreleased footage. The career-spanning set list featured hits from throughout Madonna's discography, as well as reinterpreted renditions of classic tracks, acoustic versions of 'Like A Prayer,' 'Secret' and 'Don't Tell Me' and her first ever in-concert performances of 'Take a Bow.' 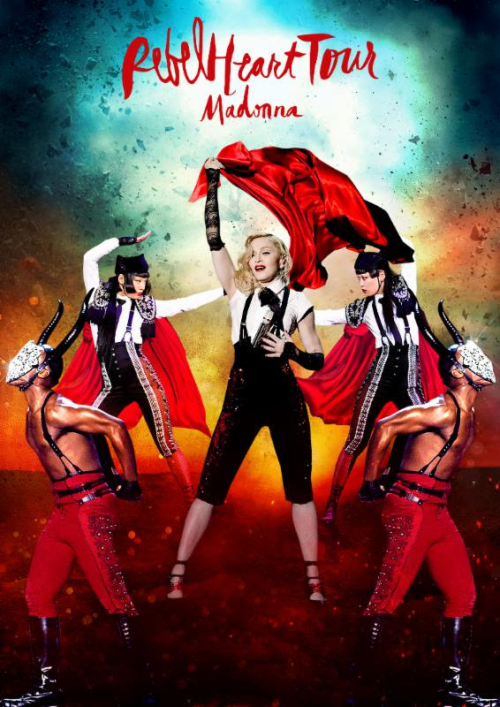 Madonna posted this message and picture about her friend Amy Schumer's new film: 'OMG this movie looks like so much FUN!! 🔥🎉🎉🎉💯💯😂😂😂. Can't wait to see my good friend Amy in her new film. this weekend. #SNATCHED! 😂🤡🎉'

Patti LuPone is not a Madonna fan, clearly. The Broadway legend went off on Madge during Tuesday's (May 9) episode of Watch What Happens Live with Andy Cohen, where she made it clear she doesn't care for Mad's singing, acting, or anything else, really.

The American Theater Hall of Famer took particular issue with Madonna's portrayal of Argentina's Eva Peron in the 1996 movie musical Evita, a role LuPone originated on Broadway in 1979. 'I thought it was a piece of s***,' she told host Cohen. 'Madonna is a movie killer.'

That hurt, but LuPone was not nearly done. 'She's dead behind the eyes. She couldn't act her way out of a paper bag. She should not be on film or on stage. She's a wonderful performer for what she does, but she is not an actress.'

The two-time Grammy and Tony Award winner went after Madonna when a caller asked if the two had ever spoken about their shared performances as the late First Lady of Argentina. She explained that she was performing in Anything Goes while Madonna was making her Broadway debut in David Mamet's Speed the Plow in 1988 when a press agent put a sign up that said 'there was only one diva allowed' in the theater at a time.

LuPone got a snicker out of that, but quickly followed up by saying that the only words Madonna has ever spoken to her were: 'I'm taller than you.' A spokesperson for Madonna could not be reached for comment. 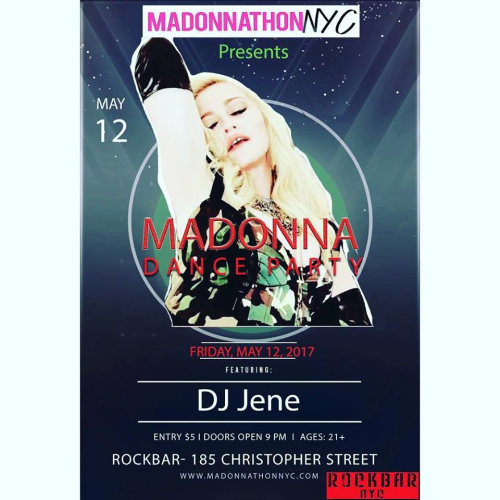 The Met Ball was full of Surprises!

I danced for 3 minutes to Deep House with Jeremy and ended up with 11 minutes of Gorilla Zoe. 🤡 The Met Ball was full of Surprises!! 🎪🎉🤡😂!! pic.twitter.com/n97AsgO7Ow

US actress Sarah Paulson successfully photobombed Madonna on the red carpet at the Met Gala and her reaction was priceless! The pair later fooled around in front of photographers as Sarah offered to position Madonna’s Moschino camo gown. 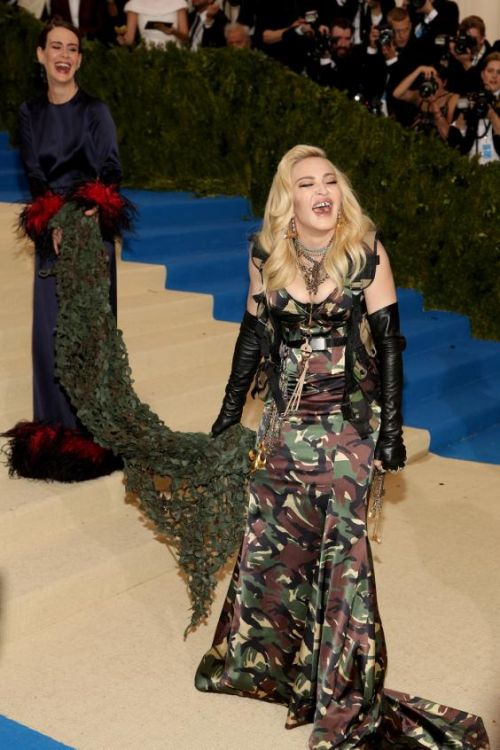 Madonna Explains Her Met Gala Dress, Reveals She Has Rosé in Her Canteen

Madonna's got a little extra help to get her through the Met Gala.

ET's Carly Steel caught up with the 58-year-old singer on the red carpet ahead of the event in New York City on Monday, where she revealed that her army-inspired look came with a canteen of rosé.

'I am of legal age. I know I look young,' Madonna joked, before explaining the thought process behind her unique ensemble.

'We knew we wanted to go with camouflage from the very start. We started with the flak jacket, and then we worked our way down inside,' she said of her Moschino look. 'So, you know, we're ready. We're ready to go to fashion war.'

Wasn't just a collaboration between Madonna and Scott - her newly adopted daughters, Stelle and Estere, gave their mom the OK.

'They're great. They also approve of my outfit,' the mother of six revealed. 'It's very important.'

With the kids at home, however, Madonna and her canteen are ready to party.

'It's going to be a fun night,' she shared. 'As long as I drink the rest of my canteen.' Madonna and Jeremy Scott get ready for the Met Gala

Madonna attended the annual Met Gala in New York City last night and shared her preparations on her Instagram page:

'Pre Met Gala Face 😂 Before Getting into Battle Dress. I prepare for Combat with MDNA Chrome Clay Mask 😂🎉🎉🎉💯♥️' 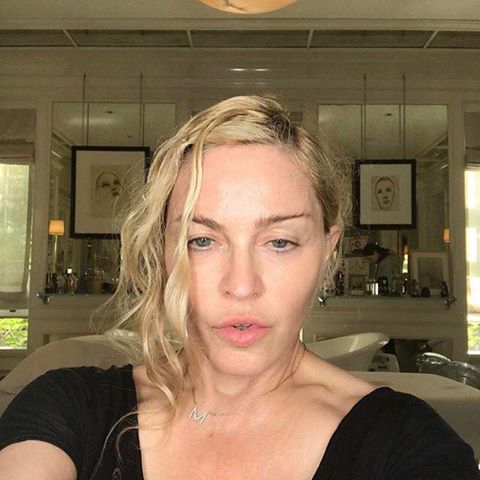 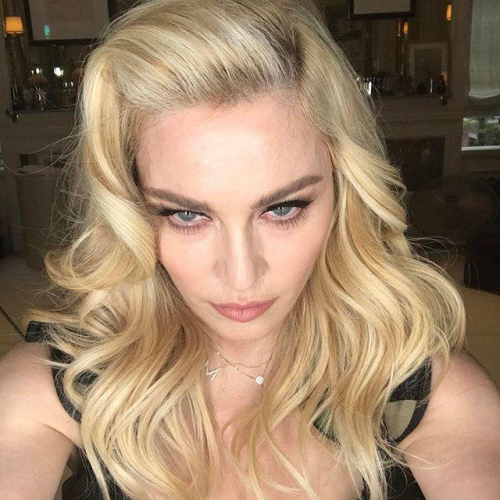