They are the simplest of documentary conceits: Where are they now? What happened to them then? These are the two questions that 'Strike a Pose,' a documentary that focuses on Madonna’s 1990 'Blond Ambition World Tour' dancers, spends 83 minutes answering.

We know what happened to Madonna, who never left the limelight. But her coterie of male dancers - who worked so closely with her that the then-childless Madonna was like a mother to them - seemingly disappeared into the wind after a brief flurry of fame. The film is a role reversal, with six of the seven dancers (the last is shown through archival footage and family interviews) front and center on screen, while the Material Girl is a ghostly presence, seen in some clips but no recent footage. That was a conscious choice on the part of co-directors Reijer Zwaan and Ester Gould.

'We realized that whatever she would say, or if she would even appear, even if we wouldn’t want to, the film would shift towards her. Because she’s an attention-grabber. We didn’t want that to happen. It would be so much different,' says Zwaan. 'There wouldn’t be this freedom and there wouldn’t be this space for them to connect with each other, because they would connect to her.'

Instead, Zwaan and Gould focused on recruiting the dancers who brought the underground dance art of vogue to the MTV-watching masses and a provided a groundbreaking example for the gay rights movement.

'We wrote them all carefully written letters in which we explained what we set out to do. That we wanted to make a film about them and their lives and their experiences, and that this wouldn’t be a film about Madonna, but a film about what that special period of time had meant to them but also to a lot of other people. And also because of the AIDS epidemic in the early '90s, it was just a moment in time where it all happened together, and they became such an iconic group of people,' says Zwaan.

Most of the dancers came on board right away, but a few were skeptical of the Dutch filmmakers’ intentions. In the aftermath of 'Madonna: Truth or Dare,' the 1991 black-and-white documentary that followed them on the 'Blond Ambition' tour, several of the dancers sued Madonna over invasion of privacy; others didn’t want to be the subject of a modern gossip flick. But Zwaan and Gould won them over, and always had in mind a film that focused more broadly on contextualizing the men within the times.

For the rest of the article and to buy tickets to the film/events visit: www.freep.com

After the films: On Saturday, Jose Gutierez Xtravaganza talks to the Free Press’ Ashley Woods, and demonstrates voguing. On Sunday, he chats with Free Press style columnist Georgea Kovanis.

Says Extravaganza about the workshop: 'Know that there’s no experience necessary. We’re going to find your inner performance artist. Everyone has one. You don’t need a technique because voguing is a feeling. It’s not something where you need to study 12 years of professional ballet or anything. It was created out of emotion and out of movement and out of feeling, and we all have that.'

As well as the Rebel Heart Tour, you can expect to see all your favourite Madonna performances, videos and remixes.

Entry is free as always, and if you want to win Madonna prizes, make sure you post as many photos as you can of you and your friends at the event on your Instagram account using the hashtag #MadonnaFanParty! 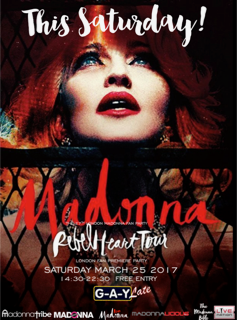 Madonna Launches Internet-Video Contest to Find Her Next Dance Trainer

Madonna is turning to the digital masses to find her next trainer.

The singer-dancer is teaming with DanceOn, the dance-entertainment digital network she helped co-found in 2010, to solicit an open call for video submissions to be considered in the audition. According to DanceOn, its community of 100 million users will help decide the finalists.

Madonna is looking for a dancer-choreographer with personal-training certification. Video submissions must include strong dance routine elements as well as heavy conditioning components.

Contestants must submit a video that is at least 60 seconds long, comprising a dance workout in the first half and a fitness workout in the second half. All submissions must be posted on on social networks (YouTube, Facebook, Instagram and/or Twitter) with the hashtags #MadonnaChallenge and #DanceOn, and all must be 18 or older. The finalists will be flown out to New York to work out with Madonna before she makes her final selection.

DanceOn CEO Amanda Taylor said the timing of the final selections in the contest will be left to Madonna’s discretion. ''We’re going to see what kinds of submissions come in,' she said.

More info on the contest is available at danceon.com/madonna

From Variety Via Yahoo! News

Madonna sure knows how to express herself!

The legendary entertainer, who has been known for being a devoted Kabbalist, shared a set of photos this weekend showing her decked out for Purim in a yellow dress, reminiscent of Belle from Beauty and the Beastand a matching Beast mask to play both characters fitting, considering the film premieres this Friday.

Sometimes you just have to take off the mask and confess! Madonna, 58, captioned one snap of herself (sans mask) and a male friend in a pope costume, with the singer holding a rose between her teeth.

Elegant and Lady Like. Confident yet Loving. Thats what matters! she wrote to accompany another photo, in which shes wearing the iconic yellow dress and white gloves, a beautiful necklace and the beast mask.

Sometimes you just have to take off the mask and confess! 💛🐗😇🎉😂🙏🏻 Thank you @JRart pic.twitter.com/XwfvVk7rFt

The only UK Madonna event supported by Madonna’s team, MADONNA FAN PARTY, is proud to announce the 2 on Saturday 25th March 2016 at G-A-Y Late, Goslett Yard, Soho, for the Fan Premiere of the Rebel Heart Tour.

Entry remains free as it always does at every London Madonna fan event, with doors opening at 14:30 and the celebration going on until 22:30. Fans travel from all over the world to Madonna Fan Party events; our last party attracted fans from as far as Australia, Canada, Brazil and Argentina, along with visitors from all our Europe and of course the UK.

PLEASE ARRIVE EARLY : the Party will kick off with highlights of Madonna’s Tears Of A Clown mini-show, with the Fan Premiere of the Rebel Heart Tour kicking off at 15:30 for you to enjoy with your friends. Once you’re in, don’t leave as you’ll miss out on Prize Draws, drinks promotions and 8 hours of Madonna videos - including all of your favourite performances from Madonna’s iconic Who’s That Girl World Tour. 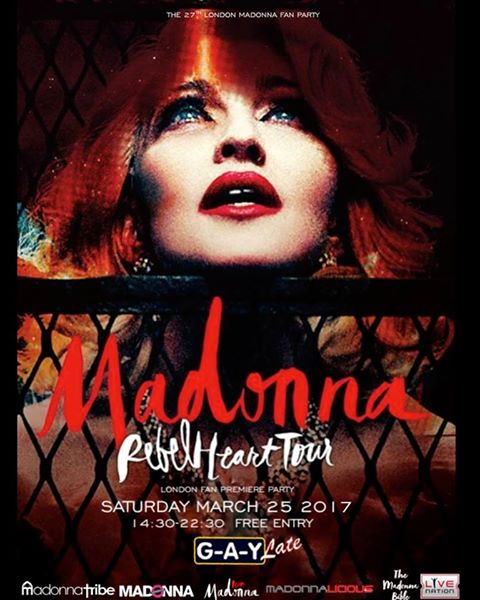 Fans still looking for the three Madonna covers of German Vogue can buy online (with worldwide shipping) via www.newsstand.co.uk

Madonna is indisputably the Queen of reinvention. She's a true chameleon that pops up always where she's least expected and never as we could imagine. She's a never-ending inspiration to all of her fans, and many of them express their art (re)working on their idol's image.

Piccadilly Edition is giving you the opportunity to discover a selection of works by Sébastien from madonna-art-vision.com that depict the one and only Queen of Pop in a totally revisited, sublime, oneiric, and sometimes crazy, way. 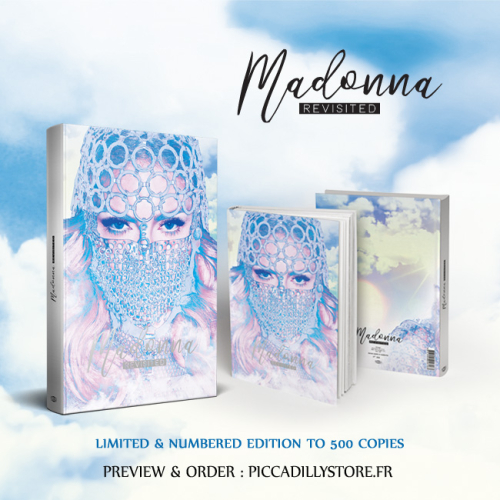 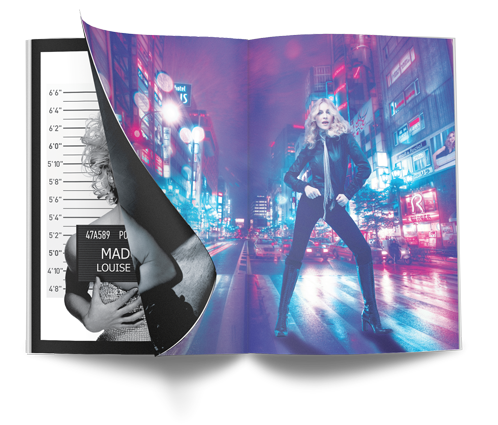 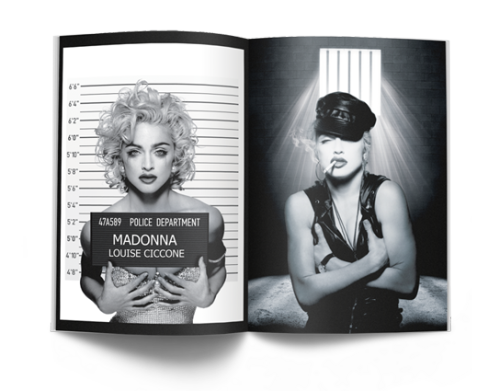 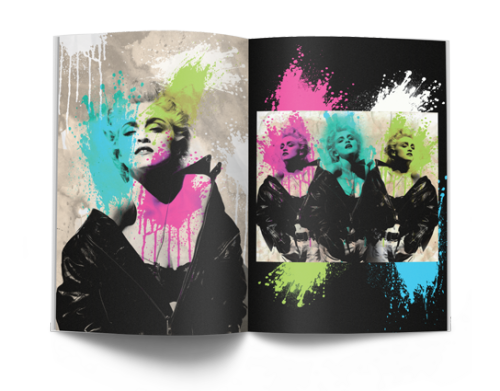 Madonna on the cover of German Vogue

Madonna is featured on the three covers of the April 2017 edition of German Vogue, photographed by Luigi & Iango. 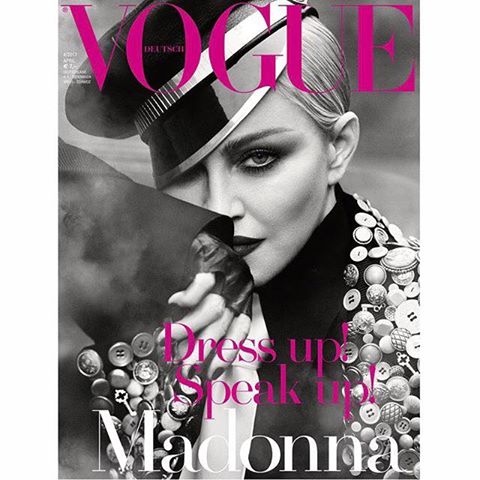 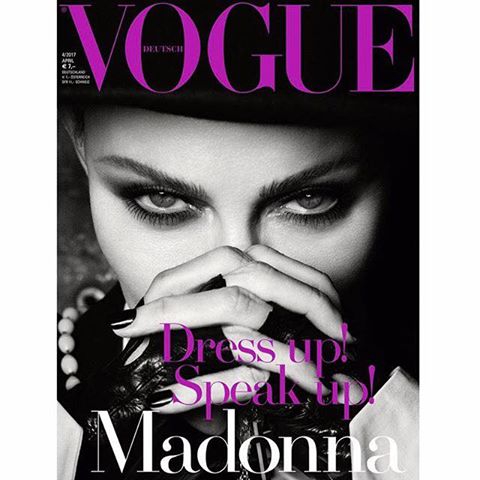 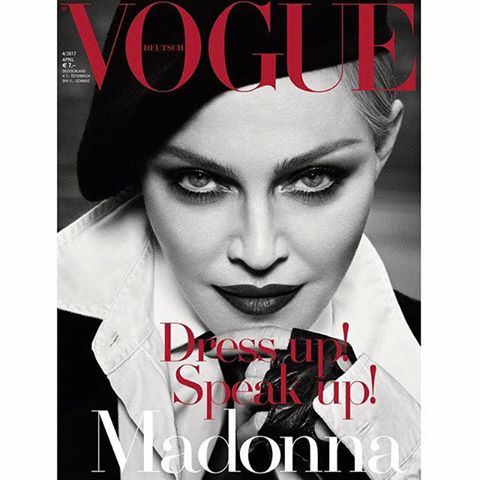