The February issue of Vogue Italia featuring Madonna on the cover has reached the UK in limited quantities. Three out of the four covers were available (I missed out on the fourth cover - boo). 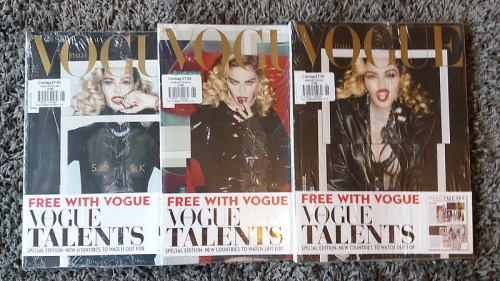 Madonna posted this new picture on herself lying on the floor with her 4-year-old twin daughters, Estere and Stelle, on her Instagram page. 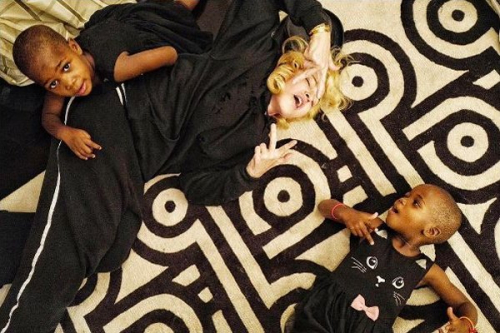 Madonna is featured in artwork by Benjamin Seidler on the special subscibers' cover of UK magazine Grazia that was delivered to subscribers today. 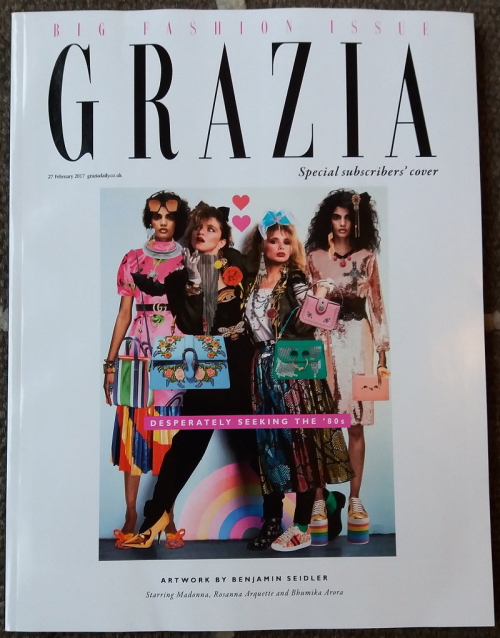 Madonna and Steven Klein attended the Philipp Plein runway presentation at NYFW held at the New York Pulic Library, she was spotted sitting FROW next to Kylie Jenner and Tyga. 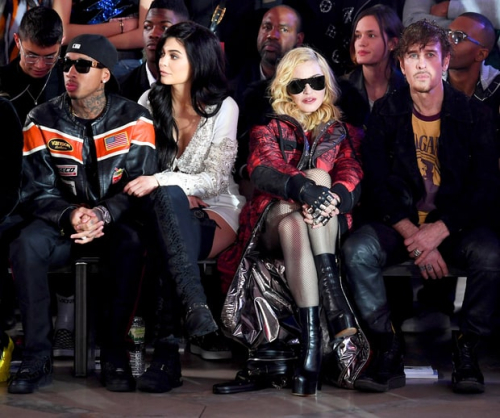 Saluting NY and Philipp Plein for your very generous donation to @RaisingMalawi. Well Done on your first Show in The big 🍎. 🙌🏻🙌🏻🙌🏻💯🌺💯🌺💯🌺💯♥️ pic.twitter.com/MRIBXl3MWg

Madonna shared the news that she is starring on the cover of the February edition of Vogue Italia, photographed by Steven Klein:

'Stamped by SK for the Polaroid Issue #StevenKlein for Vogue Italia. God Bless you Franca Sozanni not only for what you did for the World of Fashion but for encouraging strong Independent Women to take risks! 😂💘🎉🌸💯♥️💯♥️💯🎉🎉🎉💘💘💘' 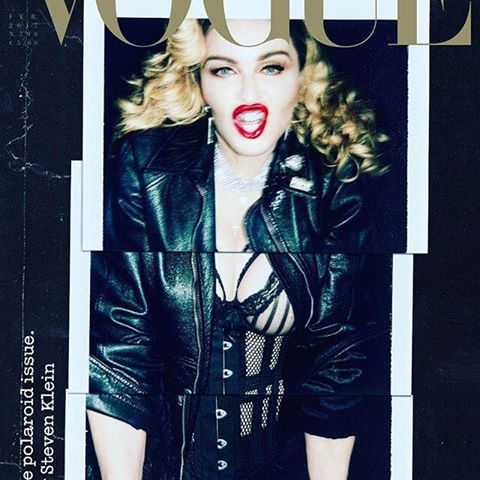 'Good Morning World!! So lucky to have worked on the last issue of Italian Vogue with The amazing and inspiring Franca Sozzani' 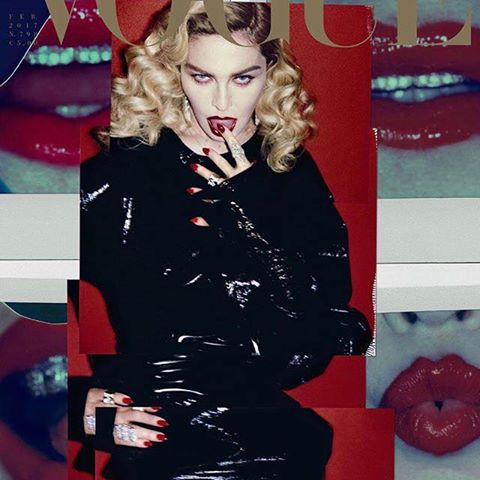 Madonna was asked 'uncomfortable questions' by a judge in Malawi during the pop star's successful application to adopt more children from the southern African country, according to a court document obtained Wednesday by The Associated Press.

Judge Fiona Mwale detailed her reasons for letting Madonna adopt the 4-year-old twin girls in a ruling on Tuesday, saying she was satisfied that Madonna 'is motivated by her desire to offer a home, love, protection and guidance.'

Madonna, who has two other adopted children from Malawi, previously described reports of a new adoption process as false, saying she was in the country for charity work. But on Wednesday she said in an Instagram post that 'I can officially confirm I have completed the process of adopting twin sisters from Malawi and am overjoyed that they are now part of our family.'

The singer filed for adoption in a high court in Lilongwe, Malawi's capital, on Jan. 25, court and government officials said. The Associated Press last month reported that she was seeking the adoption, but at the time she denied that any such proceeding was underway.

'The petitioner is a professional performer and I guarded myself against the danger of her merely reciting a well-rehearsed speech by asking her some rather uncomfortable questions to which she gave very candid answers,' Mwale said in her ruling.

Mwale said she didn't challenge Madonna, 58, on Malawi's residency requirements for adoption, saying the country's Supreme Court of Appeal had addressed the issue in the pop star's previous adoption.

'In determining her motives, I questioned the petitioner at length about the impact of her decision which could be construed as robbing Malawi of its most precious resource, its children,' the judge wrote.

Madonna said the children will keep their birth names as part of an effort to preserve their identity as Malawians, and a Malawian carer will travel with the children to the United States to ease their transition, according to the ruling.

The twins were delivered by cesarean section and the mother died within a week because of complications from the birth, the court document said. The children have five older siblings and the father, who was at the Jan. 25 court hearing attended by Madonna, had remarried and was unable to provide for all his dependents, it said.

In 2006, Madonna founded the charity Raising Malawi to address the poverty and hardship endured by the country's orphans and vulnerable children.

In 2013, Malawi accused Madonna of exaggerating her contributions to the impoverished country and unreasonably demanding special treatment during a tour there. The pop star denied the accusations. On a visit to Malawi in late 2014, she met newly elected President Peter Mutharika as well as the father of her adopted, Malawi-born son.

Mwale noted that the pop star has raised $7.5 million for her latest project in Malawi, the construction of a pediatric surgery ward at Queen Elizabeth Central Hospital in Blantyre. The ward is scheduled to open early next year.

From Associated Press Via Yahoo! News

Madonna has officially confirmed her adoption of twin girls from Malawi posting this picture and message on her Instagram page.

'I can officially confirm I have completed the process of adopting twin sisters from Malawi and am overjoyed that they are now part of our family. I am deeply grateful to all those in Malawi who helped make this possible, and I ask the media please to respect our privacy during this transitional time. Thank you also to my friends, family and my very large team for all your support and Love!'

I can officially confirm I have completed the process of adopting twin sisters from Malawi and am overjoyed that...https://t.co/A7q3WGmJFG pic.twitter.com/rWzLUpBdjG

Madonna's cover edition of Harpers Bazaar US has finally arrived in the UK. Selected larger newsagents may stock it, or you can buy online (while stocks last) at www.newsstand.co.uk 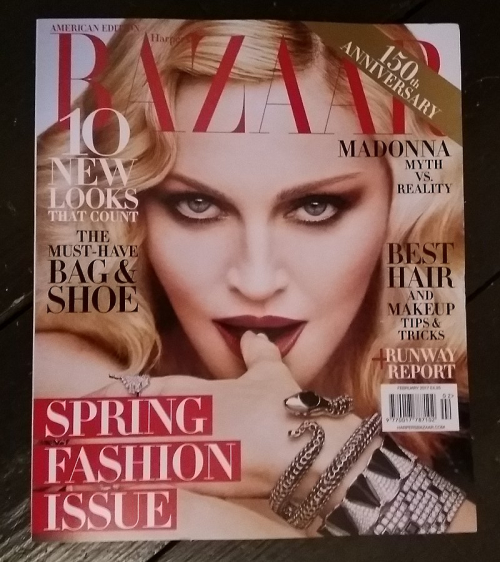 UK newspaper the Metro followed up on the Malawi adoption story in their Wednesday edition of the paper. 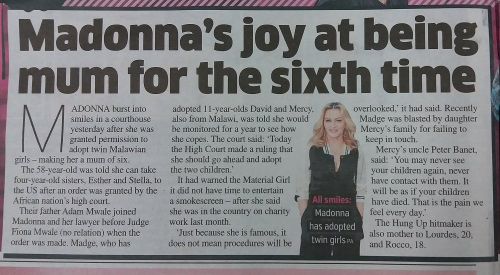 The U.S. singer has previously adopted two children from Malawi, stirring anger among some Malawians who accused the government of allowing her to skirt laws that ban non-residents from adopting.

Madonna was inside the courtroom when the approval ruling was delivered, judiciary spokesman Mlenga Mvula said.Reuters could not reach representatives for Madonna for comment.

'Madonna has demostrated over the years that she has passion for Malawi and her children and therefore the court was satisfied and could not stop the adoption of the twins,' Titus Mvalo, a lawyer for Madonna in Malawi, told Reuters.

Mvula said that one of the conditions of the adoption was that Madonna should provide a report showing that the home in which they lived was suitable.

He could not provide details on the children she will be adopting, saying it was against the law to divulge such particulars at this stage.

Madonna, 58, adopted Malawian children David Banda and Mercy James in 2006 and 2009. She has two other children, Lourdes and Rocco, from previous relationships.

Madonna denied reports that she wanted to adopt again after she visited Malawi last month, at the time saying her trip was for her charity work.

From Reuters Via Yahoo! News

Fly to see this film!

Fly to see this film! ✈️✈️✈️ I Am Not Your Negro! 🎥 A Masterpiece. Poetic. Brutal.Inspiring! "History is not the...https://t.co/FTdkGjjjHx pic.twitter.com/a7XkDfxRt0