When you've spent hours in your closet and you still cant find a thing to wear... https://t.co/mhLX2to0EM pic.twitter.com/6utg1PFJ4x

Growing up on the small Pacific island of Guam, Pia Mia never imagined that she would one day become a budding style icon, let alone be handpicked by Madonna as the first-ever fashion director of Her Madgesty’s Material Girl clothing line for Macy’s.

'I died [when I got the call]! I’m in music, so I’ve been watching all of Madonna’s music videos my whole life. And I’ve seen her documentary Truth or Dare a million times,' the 19-year-old singer told Us Weekly exclusively during a run-through of an upcoming Material Girl collection on June 15. 'Just being inspired by her musically and then having her pick me as her first-ever fashion director, it’s like blowing my mind right now.'

Pia, equally known for her unique image as she is for her powerhouse vocals, dished to Us about the responsibilities bestowed upon her by the Queen of Pop.

'As the first fashion director, I’m basically putting my personal stamp on the clothes and looking at the line sheets and making the changes to pieces that have already been created before I got involved with the brand,' the style-minded musician explained of her exciting new role. 'I’m choosing the photographers, the locations for the shoots, putting outfits together. I’m basically touching everything.'

Asked why Madonna, 57, trusted her to hand over creative control of the brand (which the music magnate launched in August 2010 with daughter Lourdes, 19), Pia pointed out that she and the superstar share a similar sartorial savvy.

'I think [Madonna’s] influenced my style just in the perspective of not caring what anyone else thinks,' the 'Do It Again' songstress - whose wardrobe staples include bandannas, thigh-high boots, checkered flannels and diamond grills - told Us, 'and wearing whatever makes you feel comfortable. I think we’re alike in that way.'

Aside from emulating Madonna’s fearless approach to fashion, Pia has made a concerted effort to follow in the 'Express Yourself' hitmaker's footsteps when it comes to maintaining authenticity as an artist.

'One of the one things that I love most about Madonna is that in the Truth or Dare movie, when the [Toronto] police come backstage and they’re like, ‘You have to perform your show a different way because we’re in this certain place,’ and she is like, ‘No, this me as a person. I’m an artist and this is what I want to do. I’m not changing my show,’' the pop ingénue recalled in awe. 'I thought that was so cool because I feel the same way. Because people are constantly trying to change who other people are, and it’s just like you have to stick to who you are and just do you.'

Although Pia hasn’t met the Material Girl herself in person yet ('I honestly don’t know what I would do!'), she’s already dreaming about collaborating with her in the recording studio....well, maybe. 'That would be just like - oh, I’d pass out,' she joked. 'I’d pass out in the booth!'

Until then, Pia is fully focused on making Madonna proud from afar. 'I think it’s dope, just because I’ve loved Material Girl for so long,' she raved to Us. 'And just to be able to work with one of my idols and a brand that I love is so perfect. I’m giving this my all.'

The Like A Prayer singer and her ex-husband were due to appear before a judge in New York on Tuesday to decide on the terms of the custody of their son Rocco, 15. But the hearing was adjourned hours before it was due to take place 'on consent of all parties'.

Madonna and her film director ex have been involved in a transatlantic custody row since last December when son Rocco refused to return home to New York after staying with his dad.

After his mother visited him in London, he has since returned to New York, and appears to be dividing his time between the U.S. city and London.

A spokesman for the Manhattan Supreme Court confirmed to Mail Online the hearing was delayed while a court officer said that the case had been 'put over for continued negotiation'.

While a new date for the hearing has not yet been set, editors at Mail Online claim both sides are close to reaching a resolution.

The New York hearing had already been delayed once before as Madonna, 57, and The Man from U.N.C.L.E director Ritchie work through their differences.

'Do you think you could get a bill passed through legislation before you leave office that would make it illegal for people to be overly literal in social media?? 😂 please Mr. President 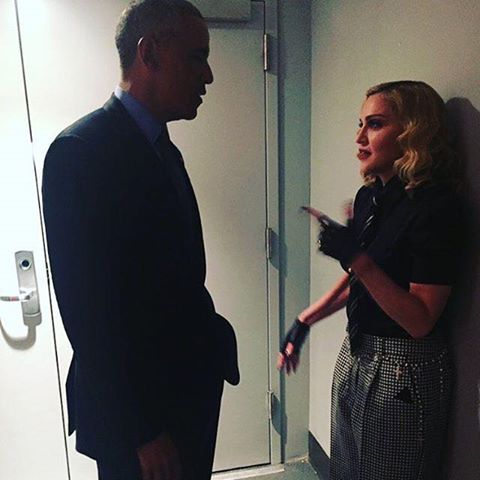 Madonna posted these three messages and pictures on her Instagram page after the Orlando terror attack: 'What has happened in Orlando is Devastating. My heart Goes Out to all the Victims of the Shooting and to their Families. Stop Hate Crimes!!!!

What has happened in Orlando is Devastating. My heart Goes Out to all the Victims of the Shooting and to their Families. Stop Hate Crimes!!!!https://t.co/oQC1Hoqj7T pic.twitter.com/tNkhYj8AVE

Love is Love. Stop Hate Crimes. 🙏🏻 Any form of terrorism is a form of Hate! pic.twitter.com/jBMOudzNMM

Madonna shared some more pictures and thoughts after her performance on The Tonight Show with Jimmy Fallon on her Instagram account: 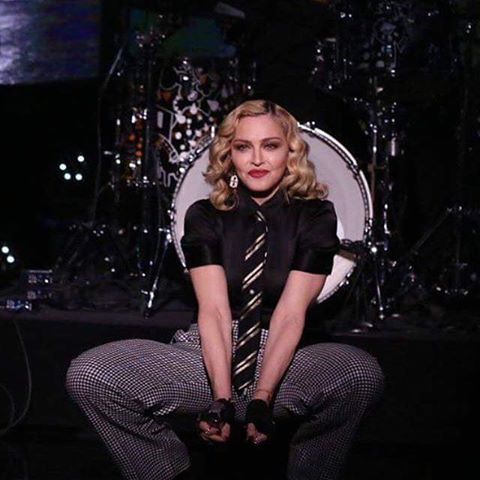 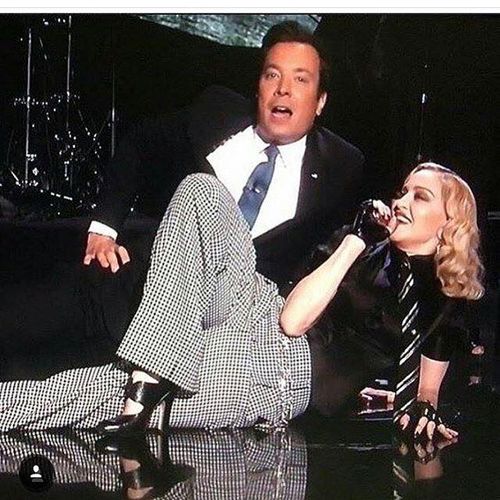 'Ok I'll sing Borderline if you let me do stand up next time I'm on your show! 😉 shhhh don't tell my manager. 🎤😷🏃🏃🏃 Jimmy Fallon' 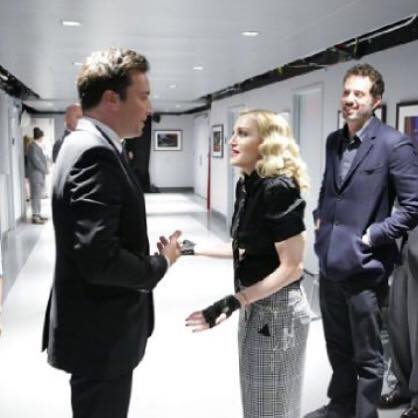 She’s got the best of Us! Madonna made a surprise appearance on the Thursday, June 9, episode of The Tonight Show Starring Jimmy Fallon to perform a slowed-down version of her 1983 smash 'Borderline.'

Before the superstar, 57, took the stage to belt out the very first top 10 hit of her career - which was the fifth single off her eponymous debut album - Jimmy Fallon told his studio audience how much he cherished Her Madgesty.

'She recently wrapped her wildly successful Rebel Heart Tour, which grossed over $190 million, making her the highest grossing solo touring artist in the world,' the late-night host, 41, said before he introduced the singer. 'Oh, I love her so much!'

At the end of her set, the pop diva had fun with Fallon by lying on the ground with him. 'I’ve been waiting all night for this,' the mom of four said over the sound of screaming fans, gazing up at the Saturday Night Live alum. 'Go ahead and push me over the borderline,' she joked.

The Grammy winner, who donned a menswear-inspired ensemble, complete with a necktie and leather glovelets, reprised some of the dance moves from the track’s iconic music video and wowed the crowd with powerful live vocals.

A meeting of the Leo's! 🦄. A Cosmic Convergence!! .
2 ❤️#rebelhearts @jimmyfallon pic.twitter.com/lf4Hv6PX3Q

Finally! Madonna’s wish to meet Barack Obama was granted on Wednesday when she was introduced to the President of the United States during an appearance on The Tonight Show Starring Jimmy Fallon.

Talking to Us Weekly exclusively last year for a 25 Things You Don’t Know About Me feature, the Material Girl revealed that Obama, 54, was the one person she really wanted to meet.

'The person I most want to meet is President Obama,' she said. 'When the heck am I going to meet him? He just needs to invite me to the White House already. He probably thinks I’m too shocking to be there. I’m serious. If I was a little bit more demure…or if I was just married to Jay Z. Hey, if Jay would only take me as his second wife, then I’d score an invitation. '

As it turns out, the singer didn’t have to wait for an invite to the White House - because Fallon made the dream meeting take place, backstage at his late show, where the President was filming an interview, inviting Madonna along for a musical appearance.

'For Once I ’m Speechless………..President Obama @jimmyfallon,' the 57-year-old musician captioned the photographic evidence of the meeting which she shared via Instagram. In the photo, Madonna, who is wearing a black shirt and a black and white tie, looks demure and in shock as she stands in front of a blurred Obama.

In another photo, shared later in the night, the two are seen posing with their arms around one another, both smiling broadly.

The episode, which will air today, Thursday, June 9, is being hailed as a 'one of a kind' show by NBC.

From Us Weekly Via Yahoo! News

'Where else besides ‘The Tonight Show’ and New York City can you have the President and the Queen on one show?,' said Jimmy Fallon.

'The Tonight Show Starring Jimmy Fallon' is America’s #1 late-night talk show, out delivering his time-period competition on the broadcast networks in every key ratings category.

With the news of Muhammad Ali's death reaching the world in the past few hours, Madonna has been joining in paying tribute to the man:

'This Man. This King. This Hero. This Human! Words cannot express. I'm devastated. God Bless Him.' 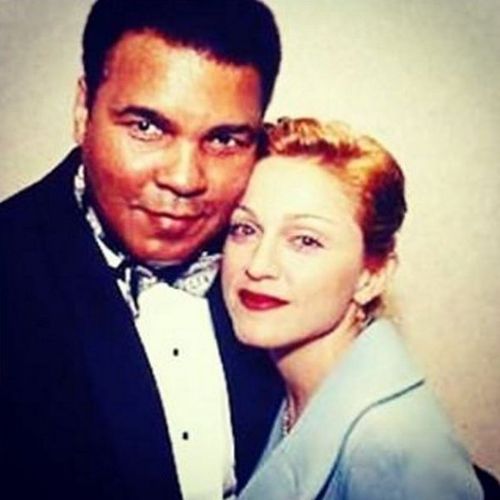 'What is going on??!! We are losing all of our National Treasures. Our Pillars of Humanity. He was the Greatest! 💘' 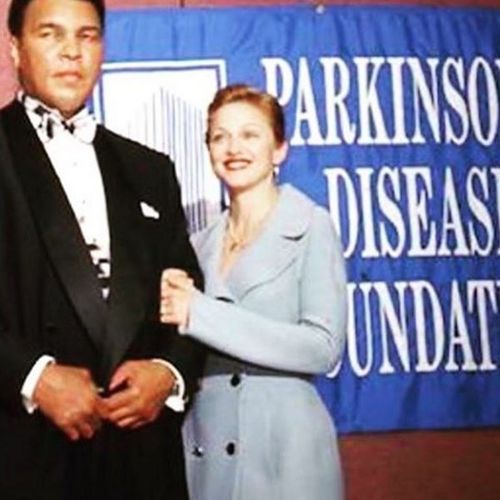 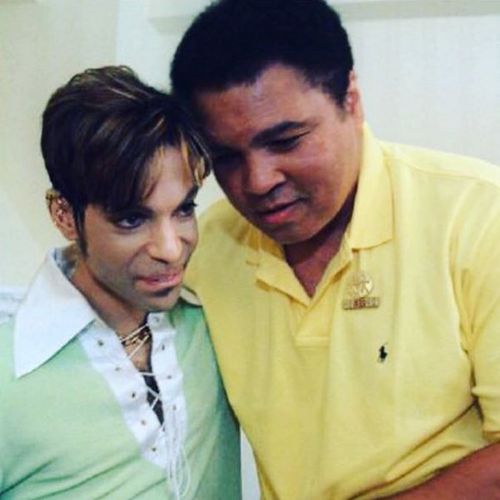 The title of one of Madonna’s most popular songs is right on the money: 'Material Girl.' With a personal fortune of $560 million, she’s one of the richest self-made women in the country - and claims the top spot on our first-ever list of America’s Wealthiest Female Musicians.

Though Madonna has been in show business for decades, her earnings power is as strong as ever. Her recently-wrapped Rebel Heart tour grossed $170 million, adding to her whopping career total: an estimated $1.4 billion on the road alone.

The latest cash infusion adds to a fortune already rich with royalties and the rising value of her real estate portfolio, which includes an outrageously large townhouse on Manhattan’s Upper East Side purchased at the bottom of the market, as well as a fine art collection reportedly featuring the likes of Picasso, Kahlo and Man Ray.

Her secret? 'I’m a workaholic' she once said. 'I have insomnia. And I’m a control freak.'

From Forbes.com - thanks to Micheal

Pop singer Madonna prevailed on Thursday in a copyright lawsuit over her song 'Vogue' that alleged a producer copied a fraction-of-a-second segment of horns from an earlier song.

The 9th U.S. Circuit Court of Appeals ruled that a general audience would not recognize the 0.23-second snippet in 'Vogue' as originating from the song "Love Break."

Attorneys for the plaintiff, VMG Salsoul LLC, could not immediately be reached for comment.

A producer of 'Vogue,' Shep Pettibone, also recorded 'Love Break' in the early 1980's, according to the court ruling.

VMG Salsoul owns the copyright to 'Love Break' and alleged Pettibone sampled the 'horn hit' from the earlier work and added it to 'Vogue.'

The three-judge 9th Circuit panel ruled 2-1 in favor of Madonna, Pettibone and other defendants including Warner Bros Records. Dissenting Judge Barry Silverman said even a small sample of music, used without a license, should be a copyright violation.

'In any other context, this would be called theft,' Silverman wrote.

An attorney for Madonna could not immediately be reached for comment.

From Reuters Via Yahoo! News

Madonna took two of her children, 19-year-old Lourdes and 15-year-old Rocco, to the off-Broadway show Sleep No More at The McKittrick Hotel on Tuesday night, all three wearing masks as they exited the performance.

Tuesday's outing marks the first time since late last year that Rocco has been back in the United States. The teenager has been living with his father, director Guy Ritchie, in London, despite a court ruling that previously granted Madonna care of him. The 'Rebel Heart' singer and 47-year-old Ritchie have been embroiled in a drawn-out custody battle since December over their son's living arrangements. The two were set to have the custody hearing on the matter on Wednesday, but it was delayed to June 14. 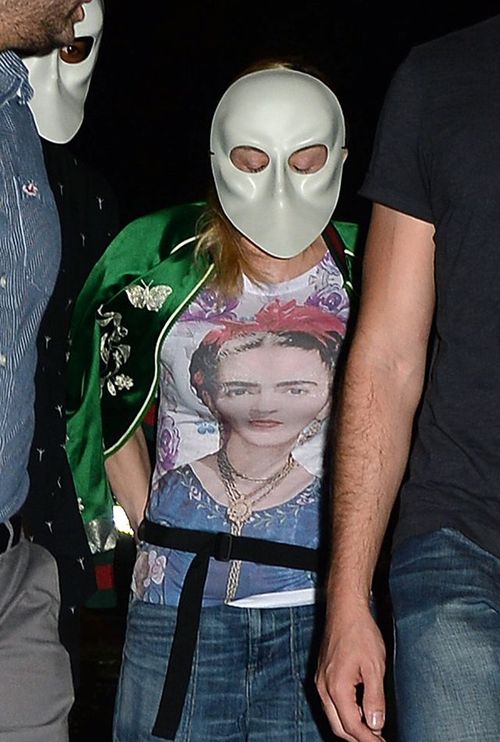