Madonna visited one the Downtown Youth Boxing Gym in her hometown of Detroit, she has been helping to support this gym since 2014.

'Downtown Youth Boxing Gym is the place to be!! Was so inspired by Cortez a young and talented Boxer hoping to go to the Olympics! If you want to help us with fundraising go to their web site for more info. #detroit ❤ #Rebel rebel-hearts' 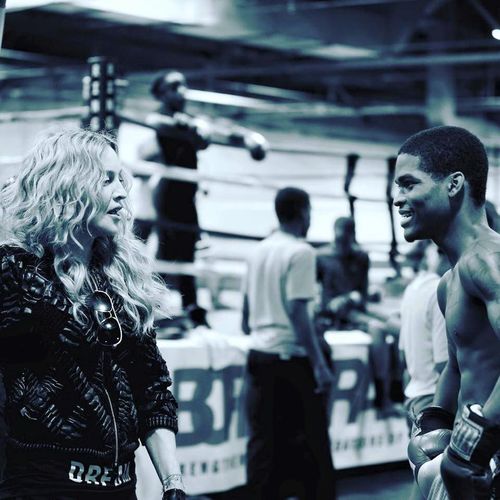 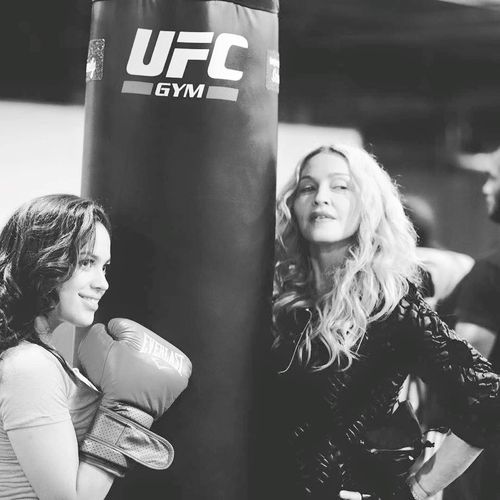 She may not stir quite as much instant outrage anymore. The Top 10 hits may not come as consistently as they used to. There’s a new generation of pop starlets grabbing the headlines and social-media oxygen.

But don’t go betting against Madonna.

Having kicked off her Rebel Heart Tour earlier this month in Montreal - launching a global jaunt scheduled to run through the spring - the Michigan-born pop star will swing into Joe Louis Arena Thursday, scene of her hometown tour stop in 2012.

At 57, Madonna seems to have moved into the stage of her career where she reigns as a kind of confident, impervious pop matriarch, grabbing what she pleases from the music of the day, still happy to titillate when she can - even if she's no longer single-handedly reshaping the boundaries of popular culture.

The Joe show brings Madonna home to a region that’s been very much on her mind this past year. In summer 2014, she pledged funding to three Detroit organizations - Downtown Youth Boxing Gym, Detroit Achievement Academy and the Empowerment Plan - after touring a host of community groups in the city.

It was the start of what she called a long-term commitment to Detroit, where 'a piece of my heart will always be,' as the Rochester Hills-bred star said.

It was about that time when word emerged that her teen daughter, Lourdes Leon, had enrolled at the University of Michigan - the school Madonna briefly attended before heading off to New York to kindle her dance career. (Lourdes and Madonna’s father, 84-year-old Silvio Ciccone, are expected to be on hand Thursday, a source close to the Joe Louis show tells the Free Press.)

And then there was the Rochester Hills dustup in March, when she took to 'The Howard Stern Show' and criticized her hometown as straitlaced and stifling. Those remarks - later reiterated in an US Weekly interview - prompted rebukes from the city’s mayor and U.S. Rep. Debbie Dingell.

A staffer for Rochester Hills Mayor Bryan Barnett said the mayor had contemplated attending the Joe Louis show to present Madonna with goodwill flowers, but will be out of town Thursday.

Madonna has always been tuned in to the latest dance-music trends, and 'Rebel Heart' certainly fits the bill. Released in the spring after a series of premature online leaks, the album sees Madonna carrying on the EDM theme she latched onto for 2012’s 'MDNA,' this time working with electronic-crossover producers such as Avicii and Diplo.

In an era when younger artists have upped the ante on stage production (see: Taylor Swift) and pushed the boundaries of pop-shock (see: Miley Cyrus), Madonna appears to be holding her own. By all accounts, the Rebel Heart Tour - part of her ongoing mega-deal with Live Nation - is a sizzling, top-end production, a spectacle of continually shifting staging, racy outfits, daring stunts and intricate dance routines, with a fit, high-energy Madonna at the heart of it all.

Reports have described a show featuring a playful, lighthearted demeanor to go with a set list that includes ample material from 'Rebel Heart.' She doesn’t neglect her older hits, but just like other Madonna tours of recent years, the veteran star uses the opportunity to overhaul arrangements and refashion musical approaches. Concertgoers who want to hear the oldies as they remember them will have to live with Madonna doing things the way she wants.

As Madonna nears her 60s, it remains to be seen how long she’ll keep running with the template that has shaped her career from the outset: the rebellious sexuality, the poking and provoking of religious conventions, the knack for keeping herself on the leading edge of fashion and trends.

Of course, many asked the same question when she turned 50 - and, for that matter, 10 years before that. We'll have to see what happens Thursday at Joe Louis Arena, but it's unlikely that Madonna is ready to be boring just yet.

From the Detroit Free Press