Instead of singing, Madonna and Pussy Riot spoke with passion about human rights issues at a concert for Amnesty International.

Madonna told the crowd of thousands Wednesday night that she received death threats for standing up for Pussy Riot, a Russian protest punk band, when two of its members were arrested for hooliganism after staging a protest in a Russian church in 2012.

'The right to be free, to speak our minds, to have an opinion, to love who we want to love, to be who we are - do we have to fight for that?' the pop icon said, answering her own question with an expletive. 'I've always considered myself a freedom fighter since the early '80s when I realized I had a voice and I could sing more than songs about being a material girl or feeling like a virgin. And I have definitely paid for and have been punished for speaking my mind and for sticking my neck out for this kind of discrimination. But that's OK.'

At the Barclays Center in Brooklyn, Madonna introduced Maria Alekhina and Nadezhda Tolokonnikova, who were released from prison in December and made their first public appearance in the U.S. on Tuesday. They spoke through a translator at the 'Bringing Human Rights Home' concert, telling the audience they were grateful to be free, but have to continue to fight to save others who are imprisoned.

Alekhina and Tolokonnikova, who wore T-shirts featuring cross designs Wednesday, thanked supporters for sending letters while they were in jail and Amnesty International for its mission to protect human rights.

'Thank you to all of those who are bold enough and who care enough to speak out against injustice and speak the truth,' Alekhina said.

The Moscow-based group, which features nearly a dozen female musicians, has been critical of Russian President Vladimir Putin and political conditions in their homeland. 'Russia will be free!' they yelled along with the crowd before they exited the stage.

While Madonna and Pussy Riot didn't perform, the Flaming Lips and Yoko Ono closed the more than four-hour event, while Imagine Dragons were crowd favorites with their Grammy-winning hit, 'Radioactive.' Lauryn Hill and Blondie earned cheers as they entered the stage. Hill kicked off her set - each act roughly performed three songs - with 'Ready or Not' from her Fugees days, while Debbie Harry was a firecracker when she sang 'One Way or Another' and 'Call Me.'

Amnesty International's 'Bringing Human Rights Home' also included performances from Cake, the Fray, Bob Geldof, Tegan and Sara, Colbie Caillat and Cold War Kids. It is the organization's first concert since the 'Human Rights Concerts' were held from 1986 to 1998, and included U2, Bruce Springsteen, Sting and Peter Gabriel.

From Associated Press Via Yahoo! News 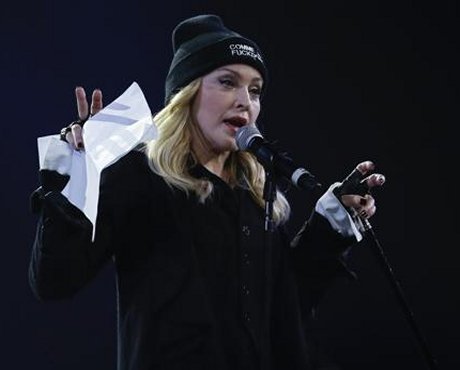 Picture from Reuters Via Yahoo! News

Now if only she and her fans would practice that. It would be great. But Madonna and her fans cannot stand other's freedom and opinions...most especially if those opinions differ and are against them. Hypocrisy at its best. Hence the irrelevance . . .

Thanks for standing behind human rights issues Madonna!! Alot of artists won't speak their real mind unless it will be popular and won't get them in any hot water. This is one of the many things I have admired about you since the first time I heard Holiday on the radio on the way to work. I had no idea who you were but I loved the song and have loved (almost) everything you have done musically since then. Having the opportunity to have dinner with you and talk to you about the world is on my bucket list even though I know it will never happen. Maybe I shouldn't say that because back in 2004 I was going to have pancreatic surgery which I thought I was not going to survive and seeing you live in concert was on my bucket list. I had tried getting tickets to see you live so many times but they always sold out too fast. Anyhow, I entered a MTV contest called "Front and center with Madonna" and I won a pair of tickets to see you in Las Vegas from the pit during your reinvention tour. Since that was on my bucket list I was so scared it was an omen I wasn't going to survive the surgery but I am still here so I shouldn't say it will never happen. And I am now writing this as if you are reading it.....I am cracking myself up right now. Anyhow, Peace!

This is such a cheap PR, what about gay rights in Iran, african countries, Pakistan, Jamaica? Does Madonna think that the only country with those issues is Russia, or bigger the country - bigger PR?

She shoud care about music she makes, we don't care about her political views and opinions, she is now out of limits promoting ONLY POPULAR issues that can call attention. She doesn't carw about Pussy Ryot ot gay stuff in those caountries, she became such a selfish individual who seeks promo in all campaigns no matter how, when and where.

being on of the biggest fans of Madoona I feel sorry for her.