Fan Report from the #secretprojectrevolution in London

madonnalicious reader Dec was at the Tate Modern screening last night of the #secretprojectrevolution film and shares his report:

I saw the Tate Modern London showing, the Soho one in Chinatown was packed, the 11pm one at the Tate was a little quieter but it was late. I thought about just watching youtube today but felt the call to war from our Queen. The screening started a little late, but only 15 minutes or so. A lot of people were wandering around thinking how and where exactly is this screening going to happen. Eventually a van and some production people arrived in a van with a massive projector and several speakers. After a test projection, the film started. It was entertaining, worth the trip and wait, she looked glorious most times, very angry tone throughout.

Not as fashion-y as I first thought, mini gang bang, she kills all the dancers. It is worth several more looks, no new music, no Rihanna. Brahim in there as an abusive police man, with Madonna being thrown in jail for artistic expression.

About 6 minutes into the screening, some people arrived in pyjamas and nightgowns and a big row occurred, I thought they were part of the show, maybe a live performance too, but no they were nasty moaning neighbours annoyed over the volume and disturbance, living next to a modern art gallery! They would not back down, kicking over speakers etc, I think they needed a dose of love and tolerance too, it was only 16mins long!

Passers by stopped, wondered what was happening, got very excited when they heard it was to do with Madonna but they got far too excited and chatty, but I had to remember love and tolerance so I just semi-glared at them with a silence look on me, they started to whisper...

Some production guys taking photos, interviewing, recording the crowd, asking what freedom meant to us. There was another man in a big bobble hat, asking questions, provoking thought. He looked very familiar, I convinced myself he was an old fit flame, thought he'd recognise me any mo, but no, I eventually recognised him as the superfit M bodyguard! Think Davis Collins funeral, she certainly keeps the staff busy on other projects!

Definitely thought provoking, and after 30 years it seems she is a little tired of I quote 'singing the same song, sit there, dance that same dance for us, and shake your ass while you are at it.' Can't remember everything, there was plenty of recording going on. Was glad I went, there was also beautiful choreography, was another group effort for Madonna and the dance team. Worthwhile, surprise secret trip outdoors. Very moving in some sections, sad in others, made me think a lot more I guess. Will definitely be watching it again and again. 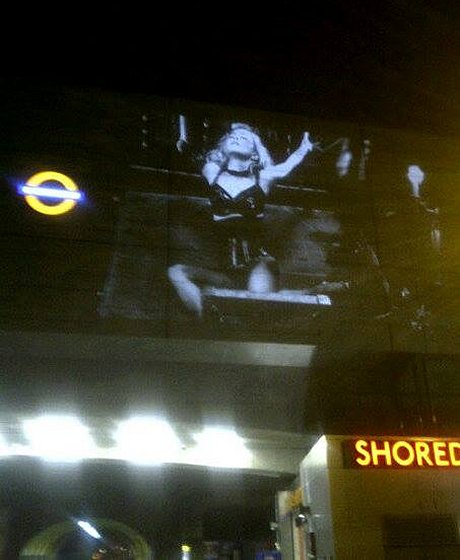 madonnalicious reader Daniel shares this picture from the Shoreditch projection screening of the #secretprojectrevolution last night.

@ngl and jeffrey: agree with you both. M has completely lost the plot artistically and musically. Increasingly, when I think of the M that I once loved, I start to think of those lyrics by the Pet Shop Boys:

"and someone said: 'It's fabulous you're still around today
You've (both) made such a little go a very long way'

why are all you people complaining about the violent context?? do you not get it?? Its showing whats going on in many places around the world if you are not a certain race your beliefs are different or your sexual preference is different. People are being persecuted for this. And yes they being shot, murdered, beat up and being thrown in jail. Wake up and stop complaining. Open your eyes. She is just showing the violence and hate that is occurring because of other peoples differences.

ffs, interpret a bit, it's art, a performance, you blindsided peeps.. :)

@richi - let's live in a pop-bubble forever, shall we.. ffs.

I adore M, but how can you preach love and tolerance when in the video she is killing all her dancers? How can violence be a part of this project at all? I just don't get it. This is all contradictory.

Madonna's 'Secret Project: Film' has her relentlessly preaching in the voiceover about Love/Tolerance (worthy sentiments)- however in the film Madonna is both Angry/Violent & Killing people with Glamour! Where's the Love? All I see is pretentious nonsense from a rich & increasingly out of touch once great performer.

Absolutely class review of what happened! Loved reading that!!!!

this video proves that Madonna doesn't care about good music anymore. Annoying speech about global things and problems, why she thinks we want to hear this?

I really don't think describing the residents of London as 'nasty moaning neighbours' - even if in jest - is very nice, or very wise.

Many - maybe even most - of them will have lived there from the time when the building was empty and disused (1981 onwards), before it was converted into the Tate Modern (1995-2000), but even if not they are entitled to respect at that late hour. Living next door to a business does not mean you forfeit your right to respect as a resident; it's the other way round: businesses owe respect to the residents whose area the businesses operate in (on a business park or industrial estate things are obviously different). That area of London isn't a rowdy one, even when it's thronging with people. Exhibitions situated outdoors in the past have proven that they can be sensitive to the locals. 11pm is very late and I doubt proper consultation was done with the residents (Toronto also seems to have had issues). It is no good starting a revolution with disrespect and contempt for people who have done nothing wrong, and who could be on your side.

It's hypocritical of Dec to glare at people when he wants them to hush whilst condemning other people who wanted the performance art to shush. You can't have it both ways: is noise allowed when it suits Dec and disallowed when it doesn't suit him? Is Dec the centre of the universe? This is precisely the sort of selfish, hypocritical behaviour that any revolution of love would need to put an end to if it was to be successful.

By this stage of her career Madonna should well understand how to organise things without riding roughshod over people. Most of her fans are old enough to understand how to get things done without treading on toes too. Freedom doesn't mean disrespect for residents. If it does, then count me out.

What does this have to do with LOVE? It seems so violent and just indulgent. Madonna is so out of touch lately... I don't get her MDNA period stuff... why all the anger? For the record, I am huge fan... but this is just﻿ stupid.

Thanks for your report! Getting chills from all the clips on YouTube and instagram. So proud to be a fan of M. I cannot wait to see the short film myself.

Only a couple of hours left until the film goes viral via BitTorrent! Let's all fight the enemy within and become freedom fighters!! :)