Madonna among mourners at funeral of David Collins

Many friends of the architect David Collins, including Madonna, gathered at St Patrick’s Church in Monkstown Co Dublin today for his funeral mass.
The acclaimed architect, who was 58, died last Wednesday from skin cancer.
Madonna arrived very discreetly carrying a bouquet of flowers and went for tea in the parochial house with David Collins’ mother, Helen, after the mass. Graham Norton was visibly upset during the homily which was given by David’s brother, Fr Michael Collins, curate of St Mary’s on Haddington Road.
The designer Tom Ford rang the family at the weekend to offer his condolences on the death of his good friend.
Fr Collins said that when David was still in his early twenties he headed to England where he got a job as an architect. He loved England and all the excitement and all the opportunities that presented themselves to him and he adapted to life very well there.
Mr Collins was an internationally acclaimed interior designer, and his projects included Claridge’s, The Connaught Hotel’s bar and Nobu restaurant.
'David was a great mimic and had an outrageous sense of humour and liked to exaggerate a story,' his brother told the congregation.
Fr Collins said that fifty eight years ago David was born less than five minutes walk away in Tudor Hall on The Hill in Monkstown which was his grandmother’s house.
'He was born to Jackie and Helen as their first son and was already the little brother to Geraldine and Paula and later on became my big brother.'
Eight days later he was brought to St Patrick’s Church to be baptized 'for that reason today brings us full circle and to completion of his life,' he said.
The final hymn was Canon Sydney MacEwan’s Bring Flowers of the Rarest which was, according to Fr Collins, 'a particular favourite of David’s'.
Among the chief mourners at the funeral were David Collins’ mother, Helen, and his sisters Geraldine McAlinden and Paula Hickey.
Irish friends included the fashion designer Louise Kennedy; the editor of Image Magazine Melanie Morris; the founder of The World of Interiors Kevin Kelly and the fashion designer-turned-antique-dealer Michael Mortell.
Family and friends travelled to the Ritz Carlton hotel in Enniskerry after the burial in Shanganagh Cemetery. 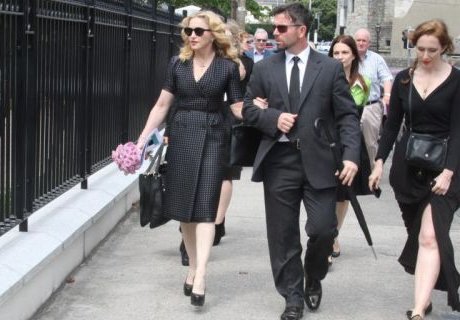 @ngl: Thanks for that re: Blond Ambition. I log on daily, but only post when I have something to say... ;-)

Madonna looks great- once again! Who's that man, they look great together.

@bristar- Welcome back & great to see you posting again! A belated 'answer' of sorts to your question RE 'The Blond Ambition Tour: male spelling for blond'- I've reread all my Madonna books & I can't find any textual references to cite backing up my claims that she did it to make a feminist statement! Sorry! But I assure you that I'm not simply making it all up, I did read it somewhere.

I think it's amazing that she had time for this trip to a funeral. Back in the late 80s and early 90s when her friends were dying of AIDS she didn't have time to attend.

Agreed, that guy is a TOTAL hottie...perhaps he should be incorporated into some of Madonna's projects. He got the goods from head to toe!

@Wales1978 and @Mattk Yes, that is indeed one of her extremely gorgeous bodyguards! Phwoar!!!

That's her bodyguard of many years people!

She just looks amazing - maybe with that guy even slightly more amazing :-))

who's the guy she is holding on to?

She looks so classy and elegant. Not Madonna, the icon but the person.

Madonna looks beautifully stylish in an effortless way, and totally appropriate for such a sad occasion.

Who is that with madonna? He looks similar to a bodyguard I have seen her with in the past year.