Pop star Madonna treated fans to an intimate show at Paris' famed Olympia theatre on Thursday, voicing her love for a France that is open to minorities and artists and reinterpreting 'Je t'aime moi non plus,' a song laced with sexual innuendo.
Tickets for the surprise show - a last-minute addition to Madonna's 'MDNA' tour - were offered first to members of her fan club and sold out within minutes. Some people began gathering outside the Olympia as early as Wednesday for the show, and anticipation was running high.
In the end, reaction was mixed and some in the audience voiced disappointment at the show's length, a mere 45 minutes. A few called for refunds as they left the 2,700-seat theatre, Paris' oldest surviving music hall which has welcomed iconic stars from Edith Piaf and Jacques Brel to the Rolling Stones.
The concert was expected to have a political overtone to it, and Madonna started off on a rebellious note.
'I have a special affinity with France, and I have for many years,' the pop star shouted at the start. 'It could go all the way to Napoleon because I think of myself as a revolutionary.'
Yet there was no repeat of the performance she gave at the 80,000-seat Stade de France on July 14, which angered France's far right party leader Marine Le Pen by showing a picture of her with a swastika superimposed on her face.
France's National Front has since announced it will sue her.
On Thursday, Madonna offered only veiled criticism of the party's anti-immigrant stance, paying homage to a France which she said once 'opened its arms to minorities.'
'I know that I have made a certain Marine Le Pen very angry with me,' she said, adding that her intention was not to make enemies. 'We are entering some very scary times in the world. People are afraid, and what happens when people are afraid? They say 'get out! You're the reason. You're the problem. You're to blame,' she told the audience.
Tickets for the show, which included both classics and songs from her latest album 'MDNA,' started at 80 euros ($98) and were offered first to members of Madonna's fan club. They sold out in less than 5 minutes, organizers said, and the Olympia's website crashed several times due to heavy traffic.
Fans started gathering at noon on Wednesday to attend the show, with many pitching tents on the sidewalk to make sure they got as close as possible to the Material Girl.
Die-hard fan, 25-year-old Ally Gloser from Cologne, Germany, said she had bought tickets for 11 of Madonna's shows over the summer, at a cost of 2,500 euros.
'Normally, I'm a student. Now I'm a poor student,' she said.
True to form, the 53-year-old offered up an array of sexy outfits and age-defying moves, at one point adding a French touch for Parisian fans with a black leather pencil skirt, red lipstick, and a French beret. She paid tribute to several French artists, including actor Alain Delon and singer Piaf.
'I walk in her footsteps, actually I crawl in her footsteps', she said of the 'La Vie en rose' singer while kneeling on stage.
Under red lights and on an entirely empty stage, Madonna sang the famous French song, 'Je t'aime moi non plus' ('I love you, neither do I') written by Serge Gainsbourg in the late 1960s. She tied a dance partner down on a chair and pretended to shoot him in the mouth.
Audience reaction to the show was mixed.
'The show itself was pretty good, but she didn't even sing for an hour', complained 33-year-old Guillaume Delaval. 'She spoke for 15 minutes about tolerance, it's not the U.N. here.'
Pierce Brosnan, the Irish actor who played in four James Bond movies, attended the show with his wife.
'We're fans. My wife wanted to come, so we bought tickets,' he told Reuters, explaining he was in Paris to shoot a movie with Emma Thompson called 'Love Punch.'

Article from Reuters Via Yahoo! News 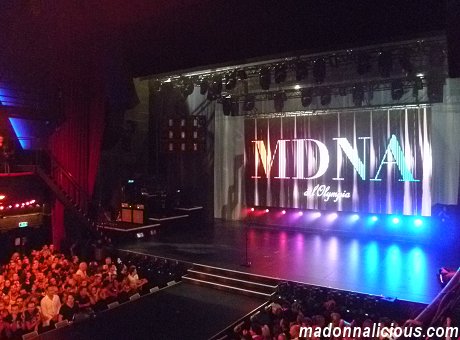 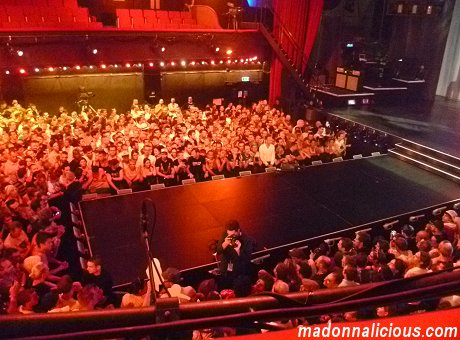 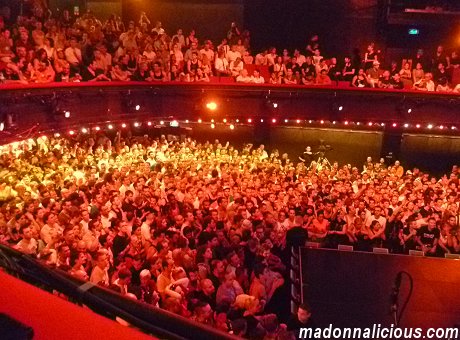 I love Madonna! she puts on an amazing show!!

Hmmmmmm. Anyone think M is planning to move to Paris (for a certain reason ;-) ), so she's sucking up to the French fans in preparation...? Just a thought...

yep it really does suck...what a way to end a career.... FAIL

Lol yeah Lisa now we know who the shits were!

Aren't those the people who backstabbed Madonna?

Can you say ungrateful? She never does small venues so they should be happy she even did that, even if it was for just 45 minutes. I saw the show on the internet and thought it was amazing. She's definitely trying to get a good point across. Are we listening????