Madonna Sits Down With Jimmy Fallon for Live Facebook Chat

'I thought it would be best to talk to my fans,' Madonna told Jimmy Fallon on Saturday, explaining why her Facebook chat with the Late Night host is the only live press she's doing for her new album, MDNA. Taped in front of an audience and live steamed through Madonna's Facebook page, the interview incorporated questions sent in from fans around the world as well as a few dance lessons for Fallon.
Over the course of the interview, Madonna professed an interest in quantum physics, said she'd like to cover the Serge Gainsbourg song 'Je T'Aime Moi Non Plus' and described how Quentin Tarantino's films inspired her new song 'Gang Bang.'
'I have a whole thing worked out in a motel room,' she said, imploring Tarantino to direct the video. 'All he has to do is show up with a camera. And I can’t afford a director’s fee.'
A fan asked what the pop queen would do if she were president of the United States.
'Well, when I am the president,' Madonna corrected, 'I will first of all take all the money spent on defense and put it into education, so that schoolteachers get paid more money. It's scandalous how low their pay is. Gay marriage would be legal everywhere and accepted. There would be no restrictions whatsoever on any of my videos, ever.'
That last policy was perhaps inspired by the recent news that YouTube is limiting views of the 'Girl Gone Wild' video to those over 18. As Fallon put it, 'Now you have to hide the grinding and the groins.'
'I’m supposed to be a girl gone wild in the video!' Madonna said. 'How could you go wild and not grind? This is the question that people should be asking.'
Responding to Fallon's suggestion that one shot in the video showed a man masturbating, she objected: 'No, he was just brushing off his latex g-string. They get smudged - you know light picks up all the fingerprints.'
Dressed in a t-shirt emblazoned with the title of the new album, Madonna let slip a few details of her upcoming tour, including the fact that she's recently acquired a few bruises learning how to slackline. When asked how she chooses songs to perform on tour, she said she tries to fit songs into themes and dramatic arcs in her shows.
'The first section I titled 'Transgression,' so use your imagination,' she said of the new show. 'But then I have to go back in my catalog and pick songs that fall into that category. It's not 'Cherish.'' 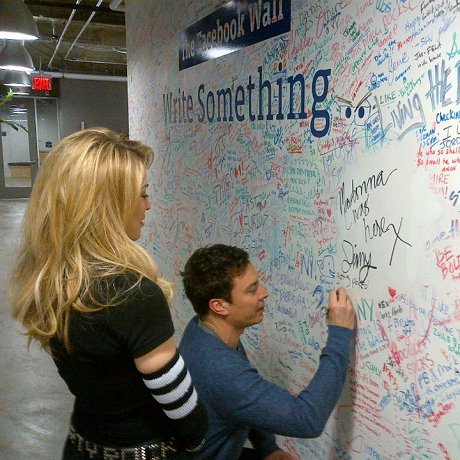