It’s the 5th Anniversary of us celebrating Madonna's Birthday! 53 this year but who’s counting... Come join us on August 14th at the fantastic central London venue, Punk - 14 Soho Street

There'll be celebs getting into the groove, an 'Express yourself' Madonna exhibition, outstanding performances, including a madonnalicious cabaret show, an amazing charity auction with 'cherish'-able prizes, a Material girl shop, the best 'Hey Mister' DJs in town and we'll be searching for a mega-Madge fan who will get to be a 'lucky star' in a Madonna documentary.

THE HOSTESS
Your hostess for the evening's extravaganza is none other than the stunning and legendary Chrissy Darling; the UK's most outrageous, fabulous, door whore and nightclub host!

THE EXHIBITION
To kick off this very special night an exhibition celebrating all things Madonna will include expressions of Madonna love in the form of electric art installations, photography, and a selection of unmissable artworks from Roberto Rashella, Magda Prus, Kurt Hoffman and ten year old Alexander Graham. Rare never before seen Madonna memorabilia will be the highlight of the show!

THE MOVIE
Lights camera action... Jelena Rozenko, budding art house movie director will be filming for the Madonna documentary 'A Madonna Odyssey'. They're searching for a star, so our incomparable Master of ceremonies, Kizzy Black, will be holding screen tests in the Madonnalicious Video lounge, no casting couch pun's intended...

THE SHOW
Fresh from their dazzling main stage performance on Trafalgar Square at London Pride - Vanilla Lush, Baga Chipz, Vicki Vivacious - the UK's top showgirls - will star in an all dancing, all singing, seven song set!
This amazing show-stopper will be complimented by a touch of cabaret with Myra Dubois who has performed at the UK's most prestigious burlesque nights and venues, also toured the UK and received almost sycophantic reviews at the Edinburgh Fringe.
Pop sensation on the rise, Glen Charleston, takes to the stage with an electrifying mix of classic Madonna hits. Glen is currently putting his songwriting talents to use on his second studio album, catch him in a rare London performance!

THE DJs
The Very Miss Dusty 'O' - Club land legend writer, club host, recording artist and The Queen of Soho herself...
The legendary DJ Craig Jones - Resident DJ at G-A-Y and having been fortunate enough to play for Madonna and all of these amazing acts - Lady Gaga, Kylie, Christina Aguilera, Mariah Carey, Pussycat Dolls, Rihanna, Alicia Keys and so many more.
David Robson - long term resident pop DJ in some of London's most iconic Gay venues is fresh from a spot supporting the Streets, Eliza Doolittle and Chase & Status with the Ministry of Sound tour crew.
Tasty Tim - He gigs all over the UK as well as Italy, Germany, New York, Australia, South Africa, Japan and Russia. Tasty is also one half of T-Total, whose remixing credits include The Pet Shop Boys, Danny Tenaglia and Cevin Fisher.
Neil Prince - resident DJ at Guilty Pleasures, Carpet Burn and Wig Out and also has played parties for the BAFTAs, MTV, Lovebox, Gatecrasher Sound System festival, indigo2, Somerset House, Hed Kandinsky and the Met Bar.
Dejay Kurt - Mr.MC himself. Originally from Oxford started a club night with James Lavelle and then worked with Soul II Soul, James Hymen,Roger Sanchez, Eddie Colon, Joey Musaphia and MTV. Now the man behind Madonna Celebrate.

THE MADONNA AUCTION & SHOP ETC...
A silent auction will be held to raise money for the charity and a shop with heaps of Madonna memorabilia, records, videos, DVDs, CDs, T-shirts and posters and loads more. So bring some cash!

A very special gift for all who attend the party is a one-off bespoke chocolate Madonna confectionary courtesy of (DC of London).

The official event photographer is the celebrated Fabio Taveres, from Brazil.

Punk, situated in the heart of Soho, is an amazing nightclub, just off Oxford Street 2 mins walk from Tottenham Court tube (5 mins from Oxford Circus). Top of Soho Square.

Advance early bird tickets are just £10 from ticketweb.co.uk (£15 on the door)

All money raised will go to Stonewall. For more information visit: stonewall.org.uk 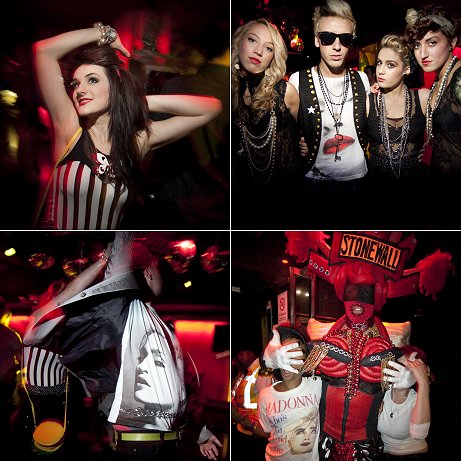