Madonna arrived back in New York City a few days ago - UK newspaper The People published this picture of her arriving at the airport. Click on the image to enlarge. 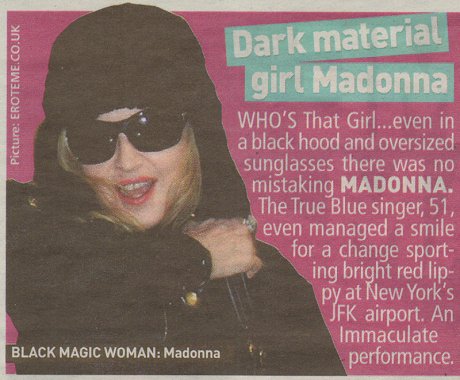 Madonna has become so nuts for coconut water that she recently invested about $1.5 million in one of the leading makers of the drink, which has taken Hollywood and The Big Apple by storm, The Post has learned.
Guy Oseary, the Material Girl's manager, told On the Money in an exclusive interview last week that the superstar decided to invest after she learned about the product from a September story in The Post.
Oseary is also investing seven figures in the company, New York-based Vita Coco, and has rounded up pals like actors Mathew McConaughey and Demi Moore, and the Red Hot Chili Peppers' Anthony Kiedis, who are making smaller, but 'significant investments.'
The total investments, estimated to be under $10 million, will amount to a minority stake in Vita Coco, which has been valued at between $120 and $140 million by industry analysts.
Madonna, who Oseary said started drinking coconut water on her world tour last year, doesn't look like she is going to be a passive investor - she's already lobbing some business ideas at company founder Michael Kirban. For example, she thinks it would be a marketing winner if the company made coconut-water popsicles.
Madonna is so enthusiastic about coconut water - the clear juice from young, green coconuts, not the brown coconuts that have a milky liquid center - that she drank fresh coconut juice daily on the overseas leg of the Sticky & Sweet tour. There is also talk that she might make a follow-up investment.
Oseary said he and Madonna were attracted to the financial side of the business because it is vertically integrated - they own their own factories - and because they are independent. 'The fact that they are saying no to everyone who wants them is pretty cool,' he said. 'You want to go to the party that no one else is invited to.'
As reported in these pages, Vita Coco, which expected to log $40 million in sales this year, turned down multimillion-dollar invest ments from beverage industry giants Coke and Pepsi - opt ing to try to make it alone in the highly competitive water wars.
Vita Coco has 60 percent of the market, but competes with two other brands, Zico and ONE.