Madonna takes to the dancefloor

Madonna is prepared to grind hard to promote man-candy Jesus Luz's career. The pop superstar showed up to catch the tail end of her boyfriend's DJ gig at the DVD release party of Matt Tyrnauer's 'Valentino: The Last Emperor' on the 18th floor of the Standard Hotel. 'She was grinding with a bunch of hot fashion guys while Luz spun,' says a spy. 'She's been tak ing a more active role in promoting him, so she stuck around for a bit and mingled before they left together (right).'
Madonna has already given her Brazilian boy-toy's modeling career a push, helping him land a juicy contract with Dolce & Gabbana, although her rep insists she's 'not at all involved in managing the career of Jesus Luz.' Also in attendance were Adrian Brody, Charlie Rose, Diane von Furstenberg, Martha Stewart, Marc Jacobs, Katie Lee - who was overheard discussing her new book of recipes in the elevator - and Brian Grazer and his former 'culture czar' Brad Grossman.

The Sticky & Sweet Tour may be over but tour dancer AntBoogie still has plenty of video diaries from the tour to share with fans. He is also building a community on his website at www.antboogieworld.com

Here is an interview he did with fellow dancer Kento who was the dancer who got to recreate Michael Jackson's moves every show.

Sticky & Sweet Diary (Kento the Jack) from AntBoogieWorld on Vimeo.

Debi Mazar: My Kids Have Play Dates With Madonna

Want to date Madonna?
Entourage star Debi Mazar has had plenty of dates with the pop icon - at least while their kids are present.
'Madonna and I have been friends for almost three decades - dear friends,' Mazar, 45, tells CelebrityBabyScoop.com. 'Our children have had play dates, and we will always be friends.'
Mazar - who appeared in five of Madonna's music videos, including 'Papa Don't Preach' and 'Justify My Love' - says that they 'enjoy each other's company immensely' when she brings daughters Evelyn, 7, and Giulia, 3, to get-togethers with the singer's children, Lourdes, 12, Rocco, 8, David Banda, 4, and Mercy 3.
'We are both creative minds,' she says, adding that she hopes to work with her again.

To read the rest of the report (including what Madonna got up to on the dancefloor) by Jacob Bernstein and more pictures from the event visit www.thedailybeast.com 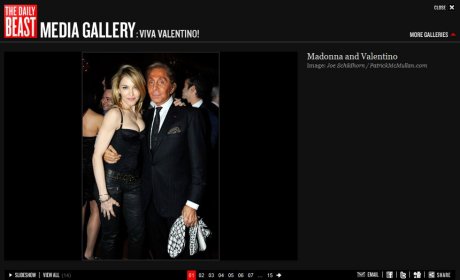 Madonna is featured on the cover of the Elle Plus supplement magazine that comes with the November 2009 issue of Japanese Elle. Click on the images to enlarge. 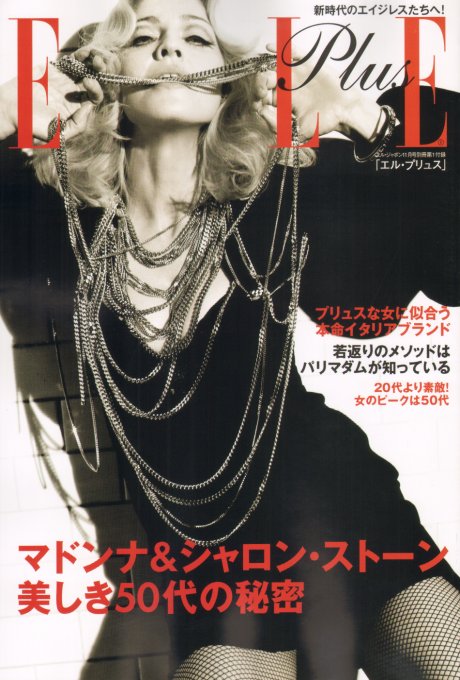 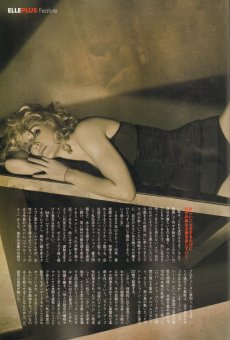 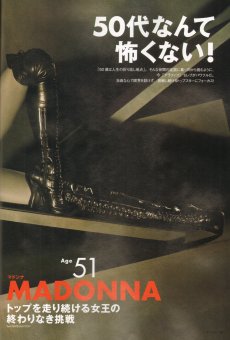 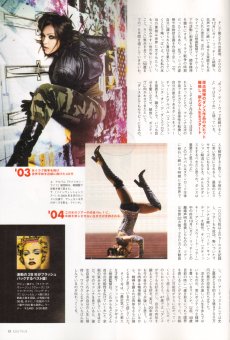 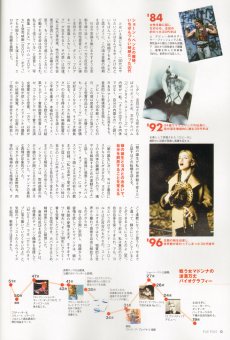 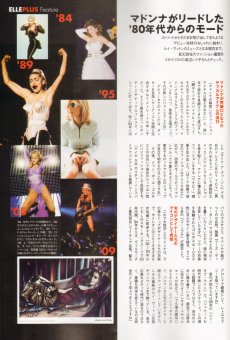 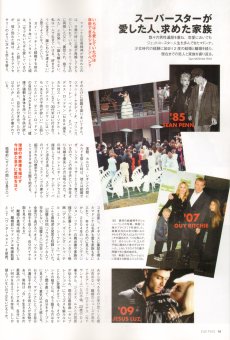 Toronto's Royal Ontario Museum is currently running an exhibition entitled Vanity Fair Portraits: Photographs 1913-2008 - Madonna's photograph by Mario Testino is featured heavily in the promotion for the exhibit and is also featured on the front of the museum. 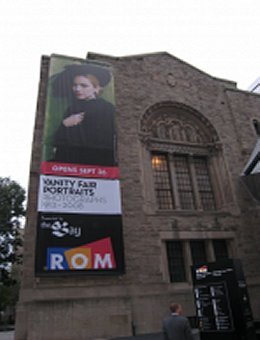 The exhibition is on now and runs until Sunday 03 January 2010 - and more information can by found at www.rom.on.ca/exhibitions/special/vanityfair 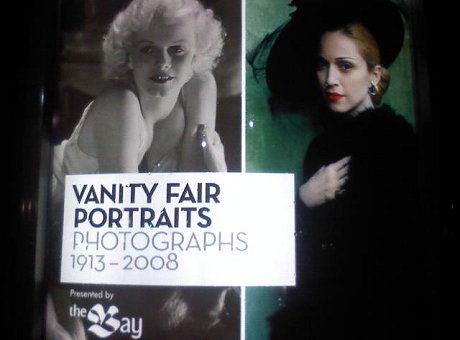 Museum Picture From www.cosmeticsmag.com - Other Picture By Derek

This selection of pictures by madonnalicious reader Kenneth from the Saturday 11 July concert in Werchter completes the Paris and Werchter sections of the tour galleries here. 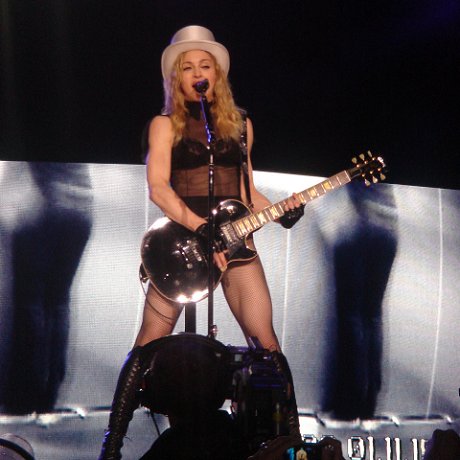 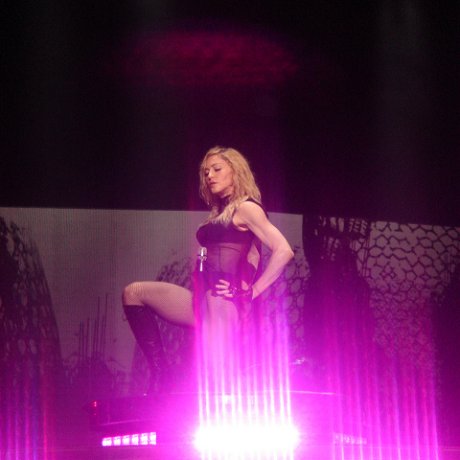 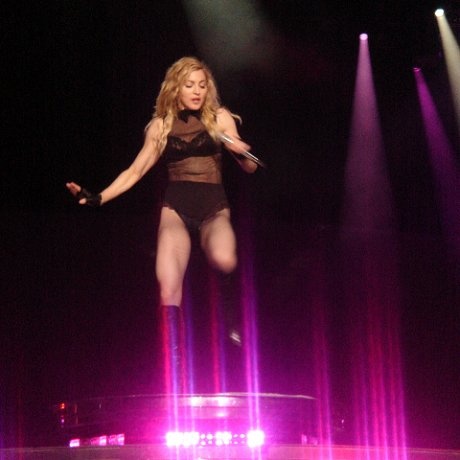 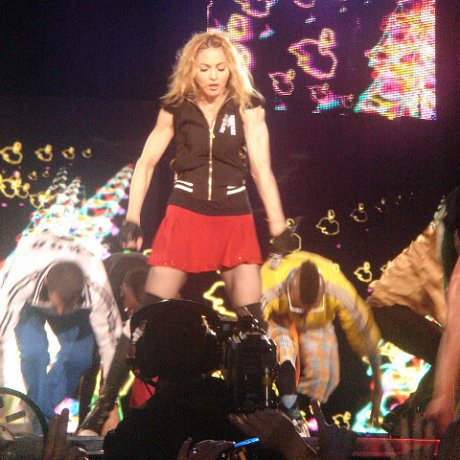 The release of Madonna's Sticky & Sweet Tour - Live in Buenos Aires DVD has been put back from a November/December release date.

Guy Oseary tweeted on his Twitter page about the DVD release date:

It will not be ready by then (December). We are working on finishing it. We will have more info soon on Madonna.com. Stay tuned.

Madonna's fifth show of the 2009 leg of the Sticky & Sweet Tour took place in Werchter, Belgium - here are some more fan pictures from the show taken by madonnalicious reader Katie. 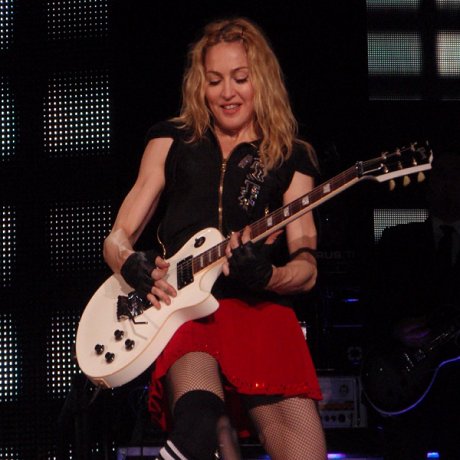 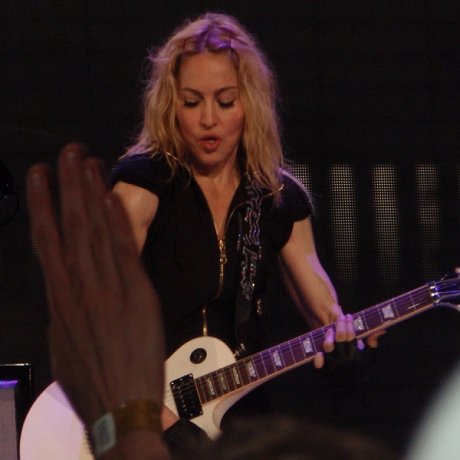 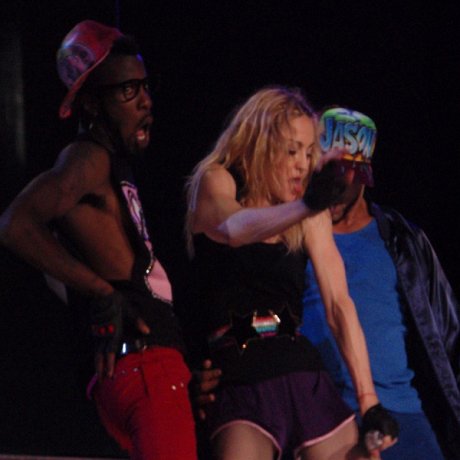 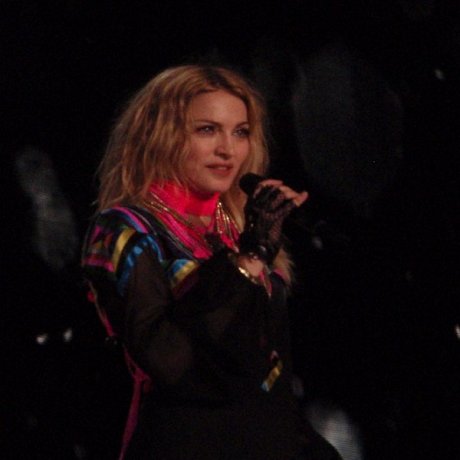 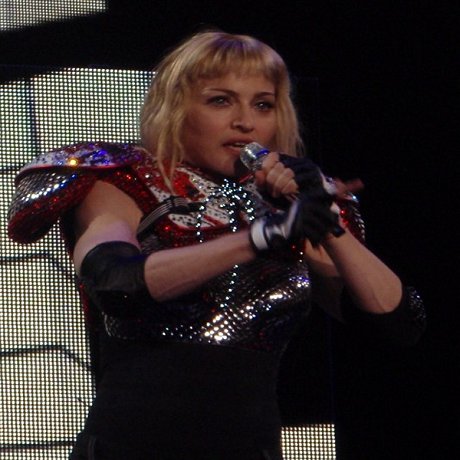 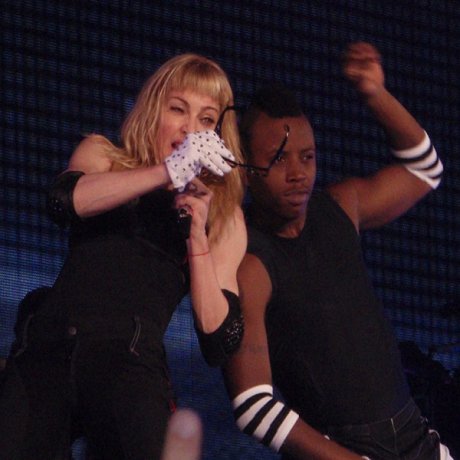 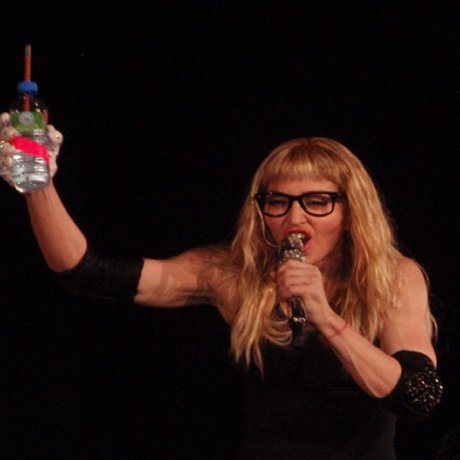 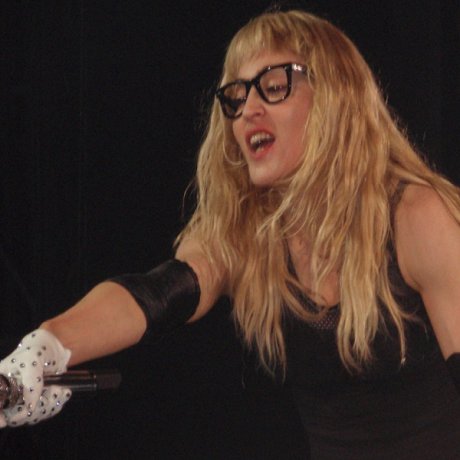 Fans wanted for Everybody magazine article

Journalist Peter Magennis would like some input from fans for a new magazine article he is putting together about Madonna and her first single Everybody:

Following my July 2008 cover feature for Record Collector magazine, I’m currently working on another magazine feature article about Madonna. Inspired by the recent release of Madonna’s latest greatest hits collection, the aptly titled Celebration; the focus of the article will be the most in-depth, behind the scenes account of the making of Madonna’s very first single, Everybody ever told.

The article will be told with the help of the song’s producer Mark Kamins, the recording engineer Butch Jones, studio owner Bob Blank, the musicians (including keyboardist Fred Zarr, drummer Leslie Ming and guitarist Ira Siegel) and her first ever agent, Rob Prinz, who were all there with her in the recording studio to witness her history in the making - and all of whom I have conducted original, exclusive interviews with.

Of course the story wouldn’t be complete without hearing from Madonna’s fans, including the original club kids who hung out at Danceteria and witnessed her debut performance of Everybody, and the world’s very first Madonna-wannabe!
If you’re a long-time fan of Madonna, who remembers when Everybody was released I’d love to hear from you. Maybe you saw her perform live at Howie Montaug’s No Entiendes, or maybe you witnessed one of her track dates at The Roxy or Paradise Garage in New York City. Did you read the review of Everybody in the Village Voice? Or maybe you just remember hearing Everybody being played on WKTU radio.
Maybe you’re from the other side of the pond and saw Madonna’s UK debut at The Camden Palace. Whatever your story, I’d love to hear your recollections of Madonna’s very first single release. Please email me at Peter@TheBeatsWithin.com – I look forward to hearing from you. 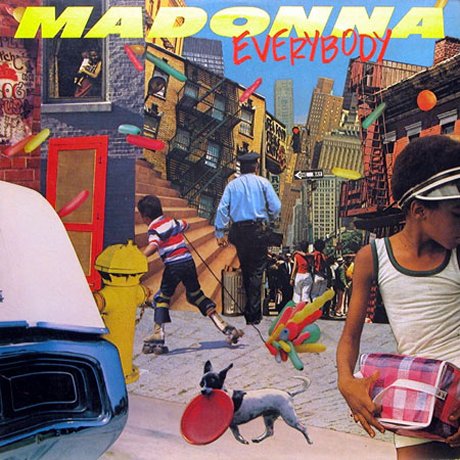 Rock'n'roll's visual side on display in N.Y. museum

A major new photography exhibit is built around the idea that the eyes are just as important as the ears for appreciating and understanding rock 'n' roll.
The Brooklyn Museum's sprawling show 'Who Shot Rock & Roll: A Photographic History, 1955 to the Present' opened on Friday as a study in the contrasts that run through the rock music subculture.
Nearly 200 photographs, videos, album covers and slide shows, from multi-panel images of Jimi Hendrix to Amy Arbus' simple gelatin print of Madonna walking down a Manhattan street in 1983, give the unsung visual aspect of more than 50 years of rock music history its due.
'This is only the beginning of the conversation about the importance of images in rock and roll,' said curator Gail Buckland, author of a companion book of the same title published this month by Knopf.
'The images have been like the step-children of its cultural history, and I wanted them to be part of the pantheon,' Buckland said.
Chronicling such events as Elvis Presley's first album cover and Amy Winehouse's wedding day in 2007, the exhibit runs through January at the museum, New York City's second-largest.
One highlight of the portraits area is a set of Richard Avedon's individual shots of The Beatles from 1967. A 1960 photo depicts 'The Fab Four' in Hamburg, although they were then five, and there was no Ringo.
Later, John Lennon and Yoko Ono pose playfully at home in bed for Allan Tannenbaum in November 1980. Two weeks later, Lennon was murdered.
More than 100 photographers are represented including Diane Arbus, Annie Leibovitz and Linda McCartney, documenting the art and lives of musicians such as Blondie, Iggy Pop, Bob Dylan, Janis Joplin, Grace Jones, Kurt Cobain, Tina Turner, Marianne Faithfull, Patti Smith and Chuck Berry.
The exhibition is scheduled to tour Memphis, Tenn., Worcester, Mass., Akron, Ohio and Columbia, S.C.

From Reuters - thanks to jvhnyc

The current issue of the Indonesian version of Rolling Stone magazine features Madonna on the cover and a translation of the Madonna article that was featured a recent edition of the US version of the magazine. 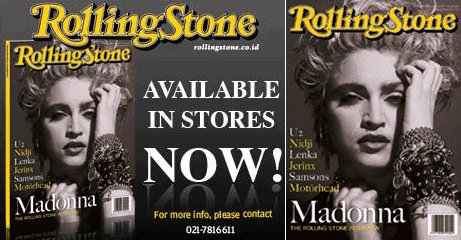 'Queen Celebration' is a book showing the glorious musical career of the Queen of Pop. This book allows you to discover (or re discover) pictures that made Madonna the most celebrated female singer around the world.
You’ll see rare pictures and previously never seen before pictures all taken by the most talented and famous photographers.

Printed on glossy paper, its format (24 x 34cm) makes this book a truly unique and a must have collector item for any fan of the Queen of Pop.
Limited collector edition: 1000 copies only!

Part of the benefits of 'Queen Celebration' will be donated to the Sidaction foundation.

'Queen Celebration' is avaliable for pre-order now at:
www.sunset-media.net/queencelebration and will be available only at Lucky Records in Paris (on Saturday 28 November 2009).

SPECIAL OFFER: One 'Celebration' DVD (Zone 2) will be given away every 50 orders! (offer ends on Tuesday 10 November). 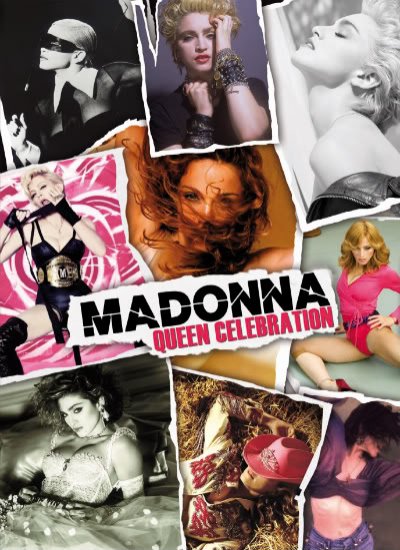 Actor Ethan Hawke has praised Madonna for her boldness in speaking out against discrimination against Gypsies, words that provoked boos from thousands of fans at her concert in Romania.
Hawke, visiting Romania to help promote his mother's charity supporting education for Gypsy children, placed the pop superstar alongside Bob Marley and John Lennon as part of a tradition of artists speaking out against racism.
'She transcended being a pop star,' he told reporters. 'She drew international attention and shone the spotlight on a level of racism and the need for greater education,' Hawke said.
At an August concert in Bucharest on her Sticky & Sweet tour, Madonna called for an end to widespread discrimination against Eastern Europe's Gypsies, also known as Roma. Thousands of fans responded by booing her.
'I don't have an agenda, Madonna doesn't have an agenda. We aren't politicians,' Hawke said.
Hawke, 38, was to speak later at the Ovidiu Rom charity Halloween ball. He and his mother, Leslie Hawke, the charity's president, were already dressed in costume: the actor in top hat and tails and his mother in a Japanese-style kimono, black wig and geisha-like makeup.
A pair of Madonna's Christian Dior shoes with autographed skyscraper gold heels are to be raffled off at the ball, which is to be held in the giant palace of the late dictator Nicolae Ceausescu. Among the other prizes is a gold chain provided by actress Vanessa Redgrave.
Hawke has been coming to Romania to support his mother's work since 2000, he said.
'I feel I can do something,' he told reporters, 'instead of being part of the problem'.
Romania has the largest number of Roma in Europe, numbering officially half a million, but whose population is believed to be as high as 2 million. The European Union's Fundamental Rights Agency has said Gypsies face "overt discrimination" in housing, health care and education.

From the Press Association Via Yahoo! News

UK city newspaper the Metro (30 October edition) featured this article on Madonna's visit to the orphanage in Malawi - click on the article to enlarge. 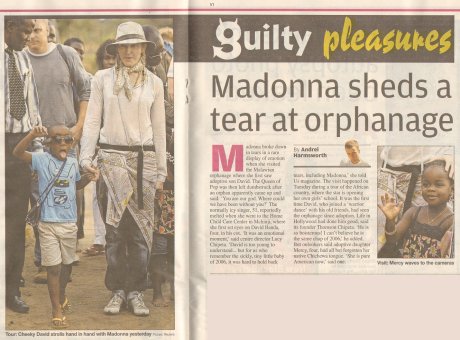