The current cover feature, Madonna Rare - Unwrapping the Candy, by Peter Magennis in the current July issue of Record Collector magazine examines the B-sides and rarities from the most collectable diva of all. The article has also brought to light a Madonna rarity available in record stores that has been lurking under fans' noses for almost two years, but has rather oddly remained undiscovered - until now!
The song in question is 'Come Closer' and as reported by Peter in this month's Record Collector, it was released by Lost Language in November 2006. The song appears on Vaults - a collection of unreleased tracks by UK dance outfit, Tilt. 'Come Closer' was produced by Mick Park, Mick Wilson and Danny Spencer and Kelvin Andrews, a.k.a. Soul Mekanik (Producers of Robbie Williams' 'Rock D.J.'), and was written by Madonna. Park comments in the liner notes: 'This Madonna song was left over from the Ray of Light album sessions, originally a ballad we twisted it a bit and John Elliott dropped the vocal.'
Madonnalicious.com recently spoke to Peter Magennis, author of the Record Collector article and he had this to say: 'Whilst researching another project I discovered a number of Madonna rarities that have slipped under even the most hardcore of fans' radars. One of the songs in question was 'Come Closer', which was brought to my attention by a fan in Canada by the name of Bertrand Joseph-Paré.
It really surprised me that seemingly nobody had heard of 'Come Closer', despite it being available to buy in record shops for so long. But I was more than a little stumped after reading the album sleeve notes. Having already interviewed several people who had worked with Madonna on Ray of Light, I was surprised to hear about another out-take from that album that I had yet to find any evidence of.'
When Record Collector's Peter Magennis spoke to Mick Park in 2007, Mick told a different story about the song's origin: 'Our old manager, John Cechinni, gave us the CD, which he had got from our publisher at the time. It was called 'I Can't Forget', but for what ever reason it was changed to 'Come Closer' at a later stage.'
The William Orbit-esque production on 'Come Closer' certainly sounds like it could have been a Ray of Light outtake, however Madonna's original song, 'I Can't Forget', was actually a collaboration with David Foster back in 1995 for her ballads retrospective, Something to Remember.
'I Can't Forget' first came to light after appearing on a song publishing database in the late 1990s. Peter Magennis recalls: 'When I first heard 'Come Closer' and heard Madonna's lyric, 'I can't forget you at all', it still didn't even dawn on me that it could be the infamous 'I Can't Forget' that I first read about so many years ago. I guess I was more than just a little swayed by the album's sleeve notes.'
Peter, who has interviewed over 100 people who have worked with Madonna in the recording studio, recalls: 'It wasn't until I actually spoke to Tilt's old manager, John Cechinni, who referred to the song by its original title that I had my light bulb moment and realised the song's origins and actually had to explain as much to both John and then Mick Park, when I finally interviewed him - and both of them weren't even aware of the song's origins.'
Peter continues: 'Although Madonna is credited as the sole writer on 'Come Closer', as many fans already know her original composition, 'I Can't Forget', was a co-write with tunesmith David Foster. Just like the other two Madonna/Foster co-writes, 'You'll See' and 'One More Chance', Madonna's original version of 'I Can't Forget' is also a ballad.' Mick Park remembers: 'It didn't really stand out at first; I remember we thought it was quite long. It was clearly an idea in the making with Madonna singing and a very basic backing track.'
Madonna's lyrics appear to be about a struggle within a relationship: 'If love means letting go of fear/Then I've got nothing but love for you dear'. Park surmises: 'It deals with the emotions and turmoil you put yourself through, so as a complete idea she nailed it perfectly.'

The July edition of Record Collector magazine is currently available at all good newsagents or to order at www.recordcollectormag.com 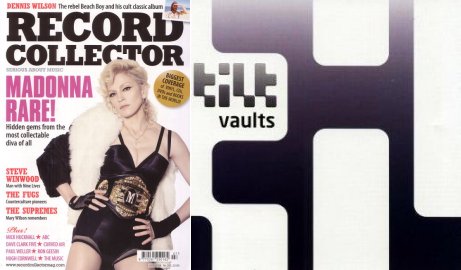 It is also available on US iTunes.

You can download the Tilt track 'Come Closer' from the UK iTunes store now: