Paris was hot yesterday, but Madonna made the Olympia Hall in Paris last night THE hottest place in town.
Fans had queued for hours, even days, to enter the show. Along with competition winners from ICON and NRJ, 500 tickets were given away at the door on the day of the show.
Before the show NRJ promotion staff handed out lollipops and sweets to waiting fans and curious onlookers, who must have been wondering what was happening - however they only had to look up at the Olympia's marquee to see that Madonna was in residence that night. 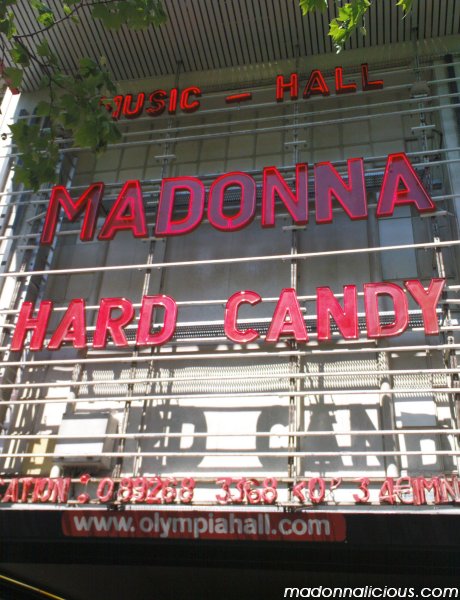 ICON winners were let in first and secured front row spots against the barriers, then other fans were let in, trying to grab a prime viewing spot. Meanwhile upstairs in the balcony, press photographers set up as the guests settled into their seats.
Every so often, the floor audience would cheer and wave as a French celebrity was spotted, and just before the show started Lenny Kravitz arrived and delighted a young fan by kissing her on the hand and making her day - along with waving at the fans below in the crowd. 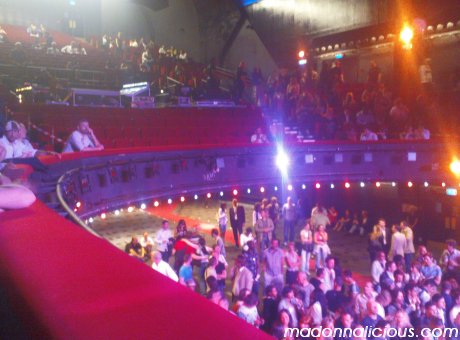 To keep fans amused while they waiting in the hall there was a DJ playing a set, who was later followed by Madonna's DJ from the band, who played some Candy-themed songs to help hype up the crowd. 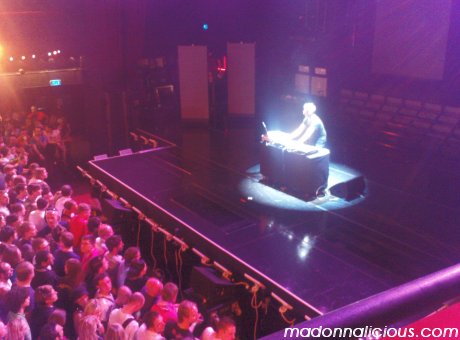 Due onstage at 10:00pm, fans waited until just after 10:30pm before she arrived!
The room went black, fans surged forward, the Hard Candy album covers that had featured on the electronic screens faded away and the show was upon us - the Queen arrived on her throne ready to invite us into her candy shop!
Seeing Candy Shop live brought a new perspective to the song, not being one of madonnalicious' favourites on the album, the live version totally rocks, whether it is the energetic performance of the song, or just seeing Madonna's enthusiasm, it is great and would be a super tour opening number.

A bottle of champagne, an acoustic guitar, and a kiss on the lips for a female dancer (shock horror - the press will love that!) follow before Madonna starts Miles Away, dedicating it to all those who were 'afraid to love'. The simplest performance of the night, but Madonna still reacting to the crowd, even giving a massive wink for those in the balcony.

Again the room goes black and fans feel another show-stopping performance is on it's way. The video screens light up and 4 Minutes begins - with no Justin in person - just on the screen!
For those who watched the Roseland show, the choreography works just as well with Madonna reacting, dancing, writhing over the video-version of Justin. The clever routine is a hit, and shows just how much preparation had gone into these promo shows.

Madonna then mentions the other great artists who have been on this stage, Edith Piaf, Marlene Dietrich, we all think we are going to get a moving speech, that is until she screams....'But they're all dead!'. 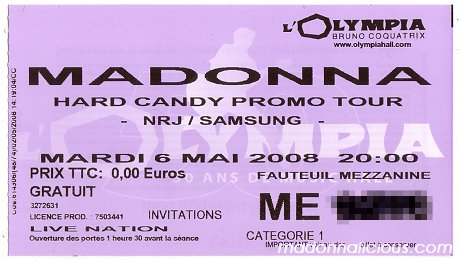 A hard rock version of Hung Up follows, with Madonna rocking out on the electric guitar, ending the song with her grinding her guitar against the amp.

And now Give It 2 Me, the second single. Again what a great performance, this time Madonna wears a pair of 'geeky' glasses, it all adds to the light hearted feel of the night. Madonna appears to be really enjoying the show, winking, laughing, interacting with the audience. She is performing sharper dance moves than some of the younger dancers!

Now the last song, Music - fans know it is the end, but give it their all, dancing, clapping, trying to reciprocate all the energy Madonna put into her performance. 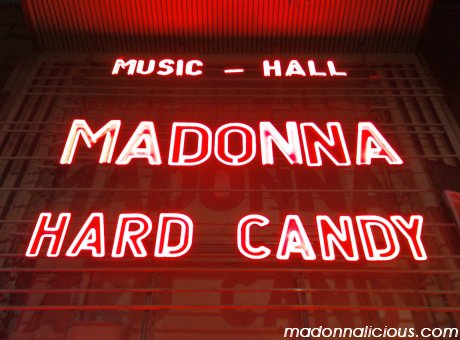 For those lucky 1,500 who attended the show, it was a night to remember, and as fans filtered out of the venue, the occasional chant of My sugar is RAW! could be heard echoing along the boulevard!

But they are all dead))) Wow. I think it's funny

I LOVE THIS ARTICLE CLARE!!!! So Awesome!!! xxd